"When we planned our country's economic development, we had the strategic objective of our Revolution in mind. It was not planned for economic development [to be] solely an end in itself. There are some who have forgotten that the sole basis of our revolutionary struggle was the ideology and politics which we follow..."- Mengistu Haile Mariam (1987)


Robert Mugabe, who has ruled Zimbabwe since 1980, is in the midst of a power struggle within the Zimbabwe African National Union – Patriotic Front (ZANU–PF) he co-founded in Zimbabwe in 1987 and the military. Officially, ZANU–PF has a socialist ideology. The party maintains a politburo and a Central Committee. During the 1970s and 1980s Mugabe self-identified as a Marxist-Leninist but re-branded himself a socialist following the collapse of the East Bloc and the Soviet Union, but his close relationship with the Castro regime continued. The 93-year old attended Fidel Castro's funeral last year and reflecting on the Cuban dictator's death said "I have lost a brother."


Mugabe has ruled Zimbabwe for 37 years, and is refusing to resign, but within the ranks of his fellow party members and the military are demanding for an end to his rule. Events in Zimbabwe are being followed closely in Cuba, and also in Ethiopia.

Mugabe's regime is particularly loathsome. There is documentation on the use of rape as a political weapon to silence women in Zimbabwe. AIDS-Free World in 2009 published a detailed report titled Electing to Rape: Sexual Terror in Mugabe's Zimbabwe which analyzed the situation there during the 2008 elections and the aftermath:


In the weeks immediately after the June 2008 presidential elections in Zimbabwe, AIDS-Free World received an urgent call from a Harare-based organization. The human rights activists were overwhelmed with reports from women associated with the opposition party, Movement for Democratic Change (MDC), who had been raped by members of President Robert Mugabe’s ruling party, ZANU-PF, in a vicious campaign to intimidate voters and emerge victorious in the presidential election. In response, AIDS-Free World undertook a series of investigative trips to the region with teams of lawyers to interview survivors of this violence. What emerged from the testimony was a brutal, orchestrated campaign of rape and torture perpetrated by Mugabe’s ZANU-PF youth militia, agents of Zimbabwe’s Central Intelligence Organization (CIO), and people who identify themselves as veterans of the liberation war (known as war veterans) affiliated with ZANU-PF. The exceptionally violent rapes, as described by women from every province of Zimbabwe, were often nearly fatal. Survivors’ terror was prolonged by fears that their attackers were among the 15% of adults infected with HIV in Zimbabwe.

Mugabe may have stopped calling himself a Marxist Leninist after the implosion of the USSR but the use of terror to maintain power continued long after and he protects his friends who have the same ideology.

There is an international communist movement that operates as a network. Fidel Castro on April 3, 1977 met in East Berlin with Erich Honecker about the need to help the revolution in Ethiopia and talked up Mengistu Haile Mariam, an emerging new Marxist-Leninist leader. Fidel Castro celebrated the initiation of the Red Terror on February 3, 1977 in Ethiopia: "Mengistu strikes me as a quiet, serious, and sincere leader who is aware of the power of the masses. He is an intellectual personality who showed his wisdom on February 3. […] The prelude to this was an exuberant speech by the Ethiopian president in favor of nationalism. Mengistu preempted this coup. He called the meeting of the Revolutionary Council one hour early and had the rightist leaders arrested and shot. A very consequential decision was taken on February 3 in Ethiopia. […]Before it was only possible to support the leftist forces indirectly, now we can do so without any constraints."


During 1977-78, a conservative estimate of over 30,000 Africans perished as a result of the Red Terror unleashed in Ethiopia by the communists and their Cuban allies. Amnesty International concluded that "this campaign resulted in several thousand to perhaps tens of thousands of men, women, and children killed, tortured, and imprisoned." Sweden's Save the Children Fund lodged a formal protest in early 1978 denouncing the execution of 1,000 children, many below the age of thirteen, whom the communist government had labeled "liaison agents of the counter revolutionaries."
Fidel and Raul Castro were both deeply involved in sending 17,000 Cuban troops to South Africa in assisting Mengistu in consolidating his rule and eliminating actual and potential opposition. The last Cuban troops did not leave Ethiopia until 1989 and were present and complicit in the engineered famine that took place there.  In 1990 traveling on a train through East Germany on my way to Prague, I spent some time speaking with an Ethiopian economist who told me how Cuban troops would round up starving Ethiopian farmers when they got close to the cities, with grain stores, and drove them back out into the countryside to starve. Donald R. Katz in the September 21, 1978 Rolling Stone article "Ethiopia After the Revolution: Vultures Return to the Land of Sheba" gave the following description of the wave of terror and repression unleashed by Mengistu.

"Toward the middle of last year [1977], Mengistu pulled out all the stops. "It is an historical obligation," he said then, "to clean up vigilantly using the revolutionary sword." He announced that the shooting was about to start and that anyone in the middle would be caught in the cross fire. In what came to be known as the "Red Terror," he proceeded to round up all those who opposed the military regime. According to Amnesty International, the Dergue killed over 10,000 people by the end of the year. One anti-government party, mostly made up of students and teachers, was singled out as 'the opposition.'"

Human Rights Watch in their 2008 report on Ethiopia titled outlined "Collective Punishment War Crimes and Crimes against Humanity in the Ogaden area of Ethiopia’s Somali Region" some of the practices carried out by Cuban troops sent there by Fidel and Raul Castro excerpted below:


Africa Watch (the precursor to Human Rights Watch’s Africa Division) analyzed Ethiopian counter-insurgency operations in this period and found that they followed a four-pronged approach: i) the forced displacement of much of the civilian population into shelters and protected villages; ii) military offensives against people and economic assets outside the shelters; iii) the sponsoring of insurgent groups against the WSLF and Somali government; and iv) attempts to promote the repatriation of refugees.23 In December 1979, a new Ethiopian military offensive, this time including Soviet advisors and Cuban troops, “was more specifically directed against the population’s means of survival, including poisoning and bombing waterholes and machine gunning herds of cattle.”24

Fidel Castro addressing Cuban and Ethiopian troops in Ethiopia in September of 1978 celebrated the bloody victory in that country proudly proclaiming the Castro regime's involvement.


"Comrade Cubans, I can recall those days of December 1977 and January 1978 when we said farewell to the first Cuban internationalist combatants who were leaving for Ethiopia. [...]Eighteen months later we have returned to a Ethiopia which is victorious be cause of its combative sons' heroism and the support of international solidarity, as Comrade Mengistu stated 2 days ago. Moreover, it is also an already powerful Ethiopia. Tuesday's popular parade confirmed the enormous popular support for this revolutionary change. Yesterday's military parade tells us of the degree of organization and discipline achieved by the combative and courageous fraternal Ethiopian people. The rapid revolutionary offensive of the Ethiopian and Cuban troops practically annihilated the enemy. [...]Ethiopian brothers, together with you we have fought and we have won. Together with you we are ready to fight again and to win again. Together with you we pledge: Fatherland or death, we shall win!"

The last few years of the Cuban government's collaboration with the Ethiopian communist regime were particularly brutal, and reminiscent of Stalin's treatment of the Kulaks in the 1930s. During the 1984-85 famine in northern Ethiopia, which shocked the conscience of the world and led Bob Geldof to organize the 1985 international rock concert "Live Aid," Cuban troops, following the lead of their ally, made the famine worse by refusing to allow food to be distributed in areas where inhabitants were sympathetic to opposition groups and engaging in a policy of "forcibly resettling people."

Charles Lane of The Washington Post in the December 1, 2016 article "Castro was no liberator" described how "the last Cuban troops did not leave Ethiopia until September 1989; they were still on hand as hundreds of thousands died during the 1983-1985 famine exacerbated by Mengistu’s collectivization of agriculture." Mengistu was forced out of power in 1991 and fled to Zimbabwe.

In an interview published in 2003 by Riccardo Orizio in his book, Talk of the Devil: Encounters with Seven Dictators, Mengistu defended his actions in Marxist-Leninist terms,  "I'm a military man, I did what I did only because my country had to be saved from tribalism and feudalism. If I failed, it was only because I was betrayed. The so-called genocide was nothing more than just a war in defence of the revolution and a system from which all have benefited."

Mengistu was found guilty of genocide in Ethiopia on December 12, 2006, and was sentenced to life in prison in January 2007. He was sentenced to death in absentia on May 26, 2008 following an appeal. Mengistu currently resides in Zimbabwe under the protection of African dictator Robert Mugabe. Question now arises that if Mugabe is forced to resign, will the new government turnover the now 80-year old war criminal to Ethiopian authorities to face justice?


Communist networks will defend Mengistu because the mass killings and manufactured famine that caused over a million deaths in Ethiopia was done "in defense of the revolution." In the same manner that Fidel Castro defended the revolution in Cuba in the early 1960s exterminating Cuban peasants who resisted the imposition of communist rule, with the critical help of 400 Russian advisors. This approach of mass murder and genocide to consolidate total power was carried out by Lenin and the Bolsheviks a century  ago in Russia.  On August 11, 1918 in a telegram sent to his communist comrades Lenin laid out the need to impose terror by setting an example: "1.You need to hang (hang without fail, so that the people see) no fewer than 100 of the notorious kulaks, the rich and the bloodsuckers. 2.   Publish their names. 3.   Take all their grain from them. 4.   Appoint the hostages — in accordance with yesterday’s telegram. This needs to be done in such a way that the people for hundreds of versts around will see, tremble, know and shout: they are throttling and will throttle the bloodsucking kulaks. Telegraph us concerning receipt and implementation. Yours, Lenin. PS. Find tougher people."

Mengistu's monstrous actions in Ethiopia was not an aberration but the faithful fulfillment of the guide book for a Marxist-Leninist to achieve and maintain power. This is the real reason why Robert Mugable protected this war criminal and odds are that if the new rulers of Zimbabwe are Marxist Leninists, like their predecessor they will continue to do so. Otherwise they would all be subject to being hauled before international courts for war crimes and crimes against humanity. 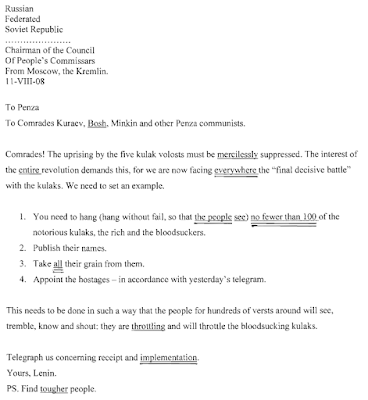