Remembering some of the victims of Cuban communism: Orlando Zapata Tamayo

"When one man dies it's a tragedy. When thousands die it's statistics." - Josef Stalin 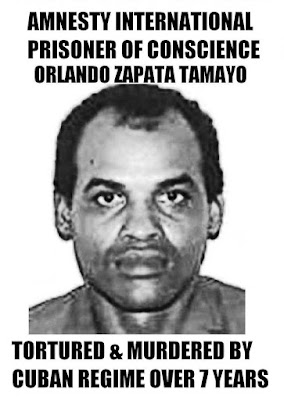 Psychologists argue that as the number of victims increase into the hundreds, and thousands that compassion collapses out of the human fear of being overwhelmed. In the case of communist Cuba the regime has killed tens of thousands, and many have become numb in the face of this reality. Therefore on the 100th anniversary of the founding of the first communist regime in Russia will focus on some of the victims of Cuban communism. These are the ones that I know of first hand because they took place during my years of activism, and knew some of the victims personally, and remain outraged at the injustice. This first entry concerns a humble bricklayer turned courageous human rights defender who paid the ultimate price for speaking truth to power.

Cuban prisoner of conscience Orlando Zapata Tamayo died on February 23, 2010 after years of torture, and a prolonged water only hunger strike.Prison authorities, in an effort to break him, denied him water over the course of more than two weeks on and off.


Orlando Zapata Tamayo, died on this afternoon, February 23, 2010, after suffering many indignities, racist slights, beatings and abuse by prison guards and State Security. Zapata was killed slowly over many days and many months in every prison in which he was confined. Zapata was imprisoned for denouncing human rights violations and for daring to speak openly of the Varela Project in Havana's Central Park. He was not a terrorist, or conspirator, or used violence. Initially he was sentenced to three years in prison, but after successive provocations and maneuvers staged by his executioners, he was sentenced to more than thirty years in prison.


Orlando Zapata Tamayo was born in Santiago, Cuba on May 15, 1967. He was by vocation a brick layer and also a human rights activist, a member of the Movimiento Alternativa Republicana, Alternative Republican Movement, and of the Consejo Nacional de Resistencia Cívica, National Civic Resistance Committee. Orlando gathered signatures for the Varela Project, a citizen initiative to amend the Cuban constitution using legal means with the aim of bringing Cuba in line with international human rights standards.
Amnesty International documented how Orlando was arrested several times in the past. For example he was temporarily detained on 3 July 2002 and 28 October 2002 for his human rights activism. In November of 2002 after taking part in a workshop on human rights in the central Havana park, José Martí, he and eight other activists were arrested and later released. He was also arrested on December 6, 2002 along with fellow prisoners of conscience Dr. Oscar Elías Biscet and Raúl Arencibia Fajardo.

Dr. Biscet just released from prison a month earlier had sought to form a grassroots project for the promotion of human rights called "Friends of Human Rights." State security prevented them from entering the home of Raúl Arencibia Fajardo, Oscar Biscet, Orlando Zapata Tamayo, Virgilio Marante Güelmes and 12 others held a sit-in in the street in protest and chanted "long live human rights" and "freedom for political prisoners." They were then arrested and taken to the Tenth Unit of the National Revolutionary Police, Décima Unidad de La Policía Nacional Revolucionaria (PNR), in Havana.

Orlando Zapata Tamayo was released three months later on March 8, 2003, but Oscar Elias Biscet, Virgilio Marante Güelmes, and Raúl Arencibia Fajardo remained imprisoned. On the morning of March 20, 2003 whilst taking part in a fast at the Fundación Jesús Yánez Pelletier, Jesús Yánez Pelletier Foundation, in Havana, to demand the release of Oscar Biscet and the other political prisoners. Orlando was taken to the Villa Marista State Security Headquarters.

He was moved around several prisons, including Quivicán Prison, Guanajay Prison, and Combinado del Este Prison in Havana. Where according to Amnesty International on October 20, 2003 Orlando was dragged along the floor of Combinado del Este Prison by prison officials after requesting medical attention, leaving his back full of lacerations. Orlando managed to smuggle a letter out following a brutal beating it was published in April of 2004:

The uproar caused by his death was a key factor in the later release over the course of 2010 and 2011 of the remaining prisoners of conscience imprisoned since 2003. Following Orlando's death, Amnesty International said "Cuban authorities responsible for activist's death on hunger strike."


Years later the Canadian punk rock band I.H.A.D. asked some important questions for tourists going to Cuba in a song simply titled "Orlando Zapata." The regime murdered the man but his defiant spirit lives on in music.