Some psychologists argue that as the number of victims increase into the hundreds, and thousands that compassion collapses out of the human fear of being overwhelmed. Soviet dictator Josef Stalin put it more succinctly: "When one man dies it's a tragedy. When thousands die it's statistics." In the case of Cuba the communist regime has killed tens of thousands, and many have become numb in the face of this horror. Therefore on the 100th anniversary of the founding of the first communist regime in Russia, that caused so much harm around the world, will focus on the small corner of Cuba and on an infinitesimal sampling of some of the victims of Cuban communism.

In this third entry will return to one of the great crimes of the Castro regime that has been well documented by international human rights organizations and reported on ABC News Nightline that claimed the lives of 37 men, women, and children. They were trying to flee the despotism in Cuba to live in freedom.

Previous entries where about Cubans trying to change the system nonviolently. The first entry concerned Orlando Zapata Tamayo, a humble bricklayer turned courageous human rights defender who paid the ultimate price in 2010 for speaking truth to power. The second entry focused on Oswaldo Payá Sardiñas, a Catholic lay activist, nonviolence icon, husband, father of three and the founder of a Cuban opposition movement that shook up the Castro regime with a petition drive demanding that human rights be respected and recognized in Cuba. This action and speaking truth to power led to his extrajudicial killing in 2012.  This entry demonstrates that trying to flee, without the permission of the dictatorship, can also be deadly. 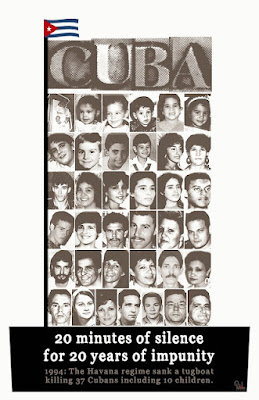 Three Cuban families, totaling almost 70 people, seeking a better life away from the dictatorship sought passage aboard the Cuban tugboat the “13 de Marzo.” The captain of the tug was part of the group wanting to leave. Despite attempts to be discreet, an informer had already reported them to State Security.

They left the port at 3:00am on July 13, 1994 and almost immediately were being pursued by other tugboats, also of the Maritime Services Enterprise of the Ministry of Transportation. Seven miles from the Cuban coast line at a location known as "La Poceta" the “13 de Marzo”tugboat was confronted by the tugboats . Amnesty International in their 1997 investigation reported that the vessels which attacked the “13 de Marzo” were Polargo 2”, “Polargo 3″ and “Polargo 5″ and identified as belonging to the Ministry of Transport. According to the IACHR report the attack did not appear improvised:

"Polargo 2," one of the boats belonging to the Cuban state enterprise, blocked the old tug "13 de Marzo" in the front, while the other, "Polargo 5," attacked from behind, splitting the stern.  The two other government boats positioned themselves on either side and sprayed everyone on deck with pressurized water, using their hoses.

The Amnesty International report mentions another vessel that "appeared to be directing operations was believed to belong to the Cuban Coast Guard, which is part of the Ministry of the Interior.”

Despite the “13 de Marzo” tugboat stopping and passengers attempting to surrender while mothers held up their children begging for mercy the other tugboats continued to ram the tug and use high pressure hoses to blast them overboard. Following this the attackers began to circle the wreckage with the aim of creating a whirlpool effect to ensure that all would drown. Sergio Perodin, one of the survivors who lost his wife and young son during the incident, explained how the massacre stopped in the Nightline program:

"We saw in the distance a boat with a Greek flag that appeared to be what stopped them. lt looked like the boat was watching what they were doing, the murder they were committing. So they stopped and decided to pick us up."

It was then and only then that the attack was suspended and the survivors picked up by the Cuban Coast Guard.

On August 5, 1994 Fidel Castro made a speech to the official news media justifying the incident and praising the men on the ships that attacked and sank the "13 de Marzo"tugboat:

"The workers' behavior was exemplary, there's no denying it, because they tried to stop them from stealing the boat.  What are we to say to them now, let them steal the boats, their livelihood?  The actions of the Coast Guard crews were irreproachable, they saved 25 lives.  So, this is what happened and as soon as information became available, more details were given.

Within three years of the crime beginning first with the United Nations Human Rights Commission in 1995, followed by the Inter-American Commission on Human Rights (IACHR) in 1996 and Amnesty International in 1997 all released reports on what had occurred with the information then available. The most in-depth of the reports was the one prepared by the IACHR. Human Rights Watch in their 1999 report "Cuba's Repressive Machinery: Human Rights Forty Years After the Revolution" in the chapter on impunity explained the importance of the IACHR report:

On October 16, 1996, the commission approved a public report concluding that on July 13, 1994, Cuba violated the right to life of forty-one people who died when Cuban government boats rammed, flooded, and sank the 13 de Marzo, a hijacked tugboat loaded with civilians fleeing Cuba. The report also found that Cuba violated the right of personal integrity of the thirty-one survivors of the sinking, and violated the rights to transit and justice of all of the seventy-two persons who attempted to leave Cuba. The report provides shocking survivors' testimony of the Cuban government's deliberate attempts to sink the boat. Statements by President Castro and the Interior Ministry regarding responsibility for the incident provide a disturbing counterpoint to the victims' experiences. Clearly, the government's effort was to exculpate itself from responsibility, rather than conduct a serious investigation and punish those responsible for this incident.

Following the massacre, family members imagined that the bodies would be returned to them. The government organized rapid response brigades and blocked anyone from visiting their homes. The Cuban government had persons with weapons to intimidate survivors and the families of the victims.


Jorge García who lost several family members in the July 13, 1994 attack sat down and spoke on camera about what he had learned about the actions of the Cuban government  both before and after the massacre.  He had been detained and interrogated on several occasions by state security. His longest detention was for 15 days. His daughter, María Victoria García, was one of three of his family who survived the massacre and spoke out but it nearly came at a great cost according to Jorge, "[t]hey tried on several occasions to kill my daughter, because she was the first to speak out and contradict the regime’s official narrative. Jorge and his daughter are now exiled in Miami. During a question and answer session at Florida International University on July 13, 2004 he explained his need for justice:

Oswaldo Payá Sardiñas, who was murdered on July 22, 2012 by state security agents, addressed the significance of this crime.


"Behind the Christ of Havana, about seven miles from the coast, "volunteers" of the Communist regime committed one of the most heinous crimes in the history of our city and of Cuba." ... "Let the silenced bells toll. But let them toll for all the victims of terror that in reality is only one sole victim: the Cuban people that without distinctions, suffers the loss of each one of their children."

The persons extradjudicially executed by the Castro regime on July 13, 1994 in the "13 de Marzo" incident are the following.