Remembering some of the victims of Cuban communism: two Cubans executed for anti-Castro propaganda and sabotage 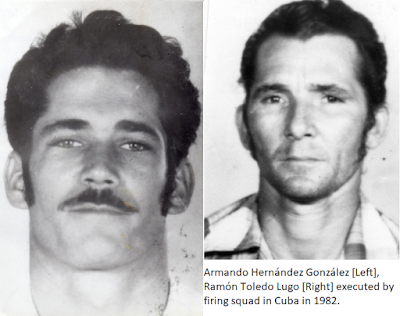 Some psychologists argue that as the number of victims increase into the hundreds, and thousands that compassion collapses out of the human fear of being overwhelmed. Soviet dictator Josef Stalin put it more succinctly: "When one man dies it's a tragedy. When thousands die it's statistics." In the case of Cuba the communist regime has killed tens of thousands, and many have become numb in the face of this horror. Therefore on the 100th anniversary of the founding of the first communist regime in Russia, that caused so much harm around the world, will focus on an infinitesimal sampling of some of the victims of Cuban communism.
The twelfth entry remembers Armando Hernández González, who along with his brother-in-law Ramón Toledo Lugo were shot in La Cabaña on October 1, 1982. They had been arrested on August 23, 1980.

Previous entries in this series were about Cubans trying to change the system nonviolently, Cubans who tried to leave the island, a student shot to death for walking down the wrong sidewalk in Havana, a young Ethiopian woman murdered in a red terror in her homeland for unknown reasons in 1978, and the eleventh entry three young black men executed by firing squad in 2003 for having hijacked a ferry in an effort to reach the United States.

On page 130 of the Amnesty International Report 1983, that covered the period of January to December 1982 reported that a large number of Cuban prisoners were terminated. "On October 1, 1982, 29 Cubans accused of the attempted assassination of President Fidel Castro were reportedly executed. Among them were Ramon Toledo, 40, and Armando Hernández González, 29. It was reported that they were executed in La Cabaña prison."

On Sunday, January 1, 1984 columnist Jack Anderson wrote a column "Castro in power 25 years" in which he provided more details on what happened to Armando.

My sources tell me that 29 Cubans were executed last year for allegedly plotting Castro's death. One of them was 29-year-old Armando Hernandez Gonzalez - a toddler when Castro took power. In a scrawled note to his family, smuggled out of prison before his execution, Hernandez wrote: "When I die, I want the flag as my roof, the earth as my mother and for air - liberty." Hernandez and some relatives were charged with "conspiring against state authority." They had pasted up anti-Castro posters in their town and spread nails on the road to puncture tires of the trucks that came to pick them up for obligatory "volunteer" labor on Sundays. These "counterrevolutionary offenses" earned them the death sentence.