Based out of Poland the twitter account #100Victims (@100Victims remembers the victims of communism 1917-2017. They have been tweeting 100 faces in representation of the 100 million killed over a period of 100 days 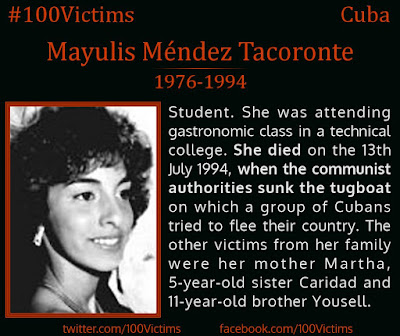 Mayulis Mendez Tacoronte was just seventeen when she was murdered by agents of the Castro regime. #100 victims offered the following summary of what happened to this young woman.


Student. She was attending gastronomic class in a technical college. She died on the 13th of July 1994, when the communist authorities sunk the tugboat on which a group of Cubans tried to flee their country. The other victims from her family were her mother Martha, 5-year-old sister Caridad and 11-year -old brother Yousell.

37 Cubans were murdered on July 13, 1994 approximately six miles from Havana when the "13 de marzo" tugboat was sunk and Mayulis, her mother Martha, little sister Caridad and little brother Yousell are part of the thirty seven lost that day.
Posted by John Suarez at 9:46 PM