Ten Years of the Geneva Summit for Human Rights and Democracy: Reflections on the first decade

The 10th Geneva Summit for Human Rights and Democracy convenes in Switzerland on February 20, 2018. Over the past decade this summit has been a vital space for dissenting voices to gather and engage in this important conversation to diagnose the problems challenging human rights and dignity and to do better and be better in order to turn the global decline of human rights around.

The first edition was held on April 19, 2009, "one day before the international community gather[ed] in Geneva to address racism, intolerance and persecution in the High-Level Segment of the UN Durban Review Conference (DRC)" and it had a longer title, "Geneva Summit for Human Rights, Tolerance and Democracy" and the tag line, "Stop Discrimination, Go for Human Rights." UN Watch, a Geneva based NGO whose mission is "to monitor the performance of the United Nations by the yardstick of its own Charter", brought together an international coalition of nineteen organizations to co-sponsor the summit.

Arielle Herzog, Leon Saltiel, Hillel C. Neuer and other UN Watch staff were the chief organizers of the first six editions and responsible for their great success and establishing this space for dialogue. UN Watch today continues to lead this coalition and build on this great legacy, but it is important to return to the beginning to see how we arrived were we are today.

The UN Durban Review Conference (DRC) of 2009 was one more example of the ongoing moral bankruptcy of the United Nations. The star speaker, and apparently the only head of state invited to speak, was Iran's notorious president, Mahmoud Ahmadinejad who engages in holocaust denial and has called for the destruction of Israel. This conference, ostensibly to confront the problem of racism, began a gathering point of the worse dictatorships on the planet to legitimize themselves.

Meanwhile, in marked contrast, the Geneva Summit for Human Rights, Tolerance and Democracy was held at the Centre International de Conférences Genève, just down the street from the Palais des Nations UN compound were the DRC was being held. Human rights defenders, victims of repression and political dissidents gathered to share their experiences, bear witness and attempt to wield real political force from the power of human conscience. This is what the martyred Czech dissident and philosopher Jan Patočka called the "solidarity of the shaken'. This coalition called for an end to discrimination and for human rights promotion.


The first summit's inaugural speech was given by by Iranian Activist and President of Stop Child Executions, Nazanin Afshin Jam, who outlined the human rights situation in Iran. She addressed that under Iranian laws the life of a woman is worth half of a man's and other sexist practices, the execution of homosexuals, and the executions of minors. The Iranian activist also gave an overview of the summit that began at 9:00am and ended at 6:30pm.

The inaugural summit was divided into four sessions that were tied into the Universal Declaration of Human Rights.

Session I was titled "Racism, Genocide, and Crimes Against Humanity: Assessing the Genocide Convention After 60 Years" and the panel was made up by Irwin Cotler, Counsel for genocide victims and dissidents, Canadian MP, Gregory Stanton, President of Genocide Watch and International Association of Genocide Scholars, Ester Murawajo, Tutsi survivor, founder of AVEGA and Dominique Sopo, President of SOS Racisme. 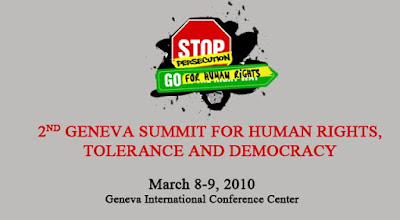 The 2nd Geneva Summit was held on March 8-9, 2010, strategically timed to coincide with the main annual session of the U.N. Human Rights Council. The objective of the 2010 Geneva Summit was to give voice to victims of the world’s worst abusers, empowering those who suffer repression under closed systems of government.

The program featured plenary sessions, workshops and training sessions over two days. A large portion of the program was dedicated to presentations—personal and compelling testimony—from victims of the world’s worst abusers.


On March 8, 2010 gave the opening address on behalf of the Geneva Summit Coalition for the second edition of the Geneva Summit. Sadly, these words remain relevant today, but now the global decline in political freedoms and civil liberties has expanded from four to thirteen years in a row.


Regrettably, the chief international body charged with protecting human rights is failing to live up to its mission to stop these and other abuses. The Geneva-based UN Human Rights Council—as acknowledged in a recent report by 17 of its 47 member states, supported by Amnesty International, Human Rights Watch, and the International Commission of Jurists—falls short in its handling of country situations, in the efficiency of the process involved in highlighting violations, and in its reactivity to crisis situations. Strong politicization of the Council, driven by bloc-based voting patterns, has led to inaction in face of atrocity and abuse. We saw this sad spectacle last week within the Council, first with the secretary general of Iran’s High Council for Human Rights denying the documented and rampant instances of torture, executions, and mass detentions of Iranians followed by the Cuban Foreign Minister’s speech who echoing his Iranian colleague also denied Cuba’s horrible human rights record and to add insult to injury went on to blame the United States for the death of Orlando Zapata Tamayo as well as slander the deceased Cuban prisoner of conscience as a criminal.

Little wonder that the March 1st magazine issue of Newsweek contains an article titled “The Downfall of Human Rights.” The article highlights Freedom House's report "Freedom in the World," released in January, and reveals a global decline in political freedoms and civil liberties for the fourth year in a row, the longest drop in the almost 40 years that the survey has been produced.

According to Summit organizers, "[m]ore then 800 people registered to attend the summit and over 1600 watched the live webcast. 35 dissidents and human rights activists took the floor to condemn and testify about some of the worst human rights situations around the world and issued a joint call for Internet Freedom around the world."

Cuban dissident Nestor Rodriguez Lobaina was denied an exit visa by the Castro regime despite being invited to attend the Geneva Summit, but the coalition did not stop there and started a campaign for him to attend.


30 NGOs from this Summit called on the UN High Commissioner for Human Rights to intervene on behalf of Cuban human rights defender Nestor Rodriguez Lobaina barred by the Cuban dictatorship from attending this meeting. The Cuban ambassador protested loudly when Hillel Neuer of UN Watch raised the matter in an interactive dialogue with the High Commissioner, but Nestor on the other hand was grateful that the UN Watch representative spoke up for his human rights.

In the end Nestor addressed the summit by phone, and would attend and address the 2012 Summit in person. Still remember the powerful and haunting testimony of Caspian Makan, human rights activist, and fiancé of Neda Agha-Soltan, who was murdered in Iran by pro-regime agents months earlier on June 20, 2009. Another speaker who made a powerful impression was Yang Jianli, activist in the 1989 Tiananmen Square protest, a former political prisoner, and founder of Initiatives for China and today a friend. The Geneva Summit created network of activists that remain in contact and continue to collaborate.

2013 was the last time I addressed the Geneva Summit for Human Rights and Democracy during the fifth edition of the gathering and less than seven months after Oswaldo Payá Sardiñas and Harold Cepero Escalante had been murdered by State Security on July 22, 2012. Present in the room were Rosa María Payá Acevedo, and Regis Iglesias Ramírez of the Christian Liberation Movement. Both had addressed the meeting.


The 5th Annual Geneva Summit for Human Rights and Democracy today is an opportunity for reflection. Unfortunately, the human rights situation around the world has not improved over the past five years and in many instances worsened. The question is why? Cuban democratic opposition activist, Oswaldo Payá Sardiñas, when awarded the Sakharov prize for Freedom of Thought on December 17, 2002 observed that “The cause of human rights is a single cause, just as the people of the world are a single people. The talk today is of globalization, but we must state that unless there is global solidarity, not only human rights but also the right to remain human will be jeopardized.” The past decade has demonstrated that he was right.

Cuban state security has worked for decades trying to discredit and silence authentic dissident voices and continues to today with their agents and agents of influence.  It is a constant struggle to frustrate their efforts. They are willing to lie, slander, assault and even murder those who have the courage to dissent. The 2012 killings of Oswaldo Payá and Harold Cepero and the aftermath demonstrate this.

For decades Cuban victims of repression said that nobody listened, and in 1987 an award winning documentary titled "Nobody Listened" interviewed Cuban political prisoners and human rights defenders describing the lack of international solidarity.  Over the past ten years thanks to the Geneva Summit for Human Rights and Democracy their voices have been heard.

This is the first reflection on the past decade of Geneva Summits.  The next summit begins on Tuesday, February 20, 2018 at 9:00am. For more information visit the Geneva Summit website here. 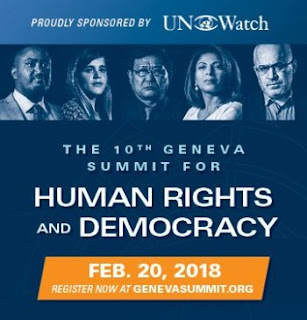