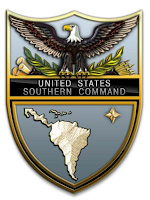 Russia’s increased role in our hemisphere is particularly concerning, given its intelligence and cyber capabilities, intent to upend international stability and order, and discredit democratic institutions. Russia is a strategic competitor actively seeking to degrade U.S. partnerships and undermine U.S. interests in the region. Moscow attempts to falsely shape Latin America's information environment through its two dedicated Spanish-language news and multi-media services, and through its influence campaigns to sway public sentiment. Expanded port and logistics access in Cuba, Nicaragua, and Venezuela provide Russia with persistent, pernicious presence, including more frequent maritime intelligence collection and visible force projection in the Western Hemisphere. The sanctuary of robust relationships with these three countries provides Russia with a regional platform to target U.S. and partner nation facilities and assets, exert negative influence over undemocratic governments, and employ strategic options in the event of a global contingency. Left unchecked, Russian access and placement could eventually transition from a regional spoiler to a critical threat to the U.S. homeland.

Additionally, North Korea may use its small presence in Latin America to do us harm while also looking to develop expanded economic and diplomatic partnerships. We remain concerned that Pyongyang could use its limited footprint in the region to collect or plot against us. Given the permissive environment in the region, North Korean efforts to generate revenue, and its history of working with supporters like Cuba to circumvent sanctions, North Korea is likely to engage in some form of illicit activity in Latin America.

Challenges to U.S. interests are not limited to extra-hemispheric actors. From a national security standpoint, Cuba has demonstrated clear intent to target U.S. interests through collection, surveillance, and counterintelligence activities in countries throughout the region. It has also demonstrably failed in its international obligation to protect diplomatic personnel. The planned political transition this spring is unlikely to change Cuba’s approach, diminish the military’s position of influence, or alter continued cooperation with Russia, China, and even North Korea on a range of security, political, and economic issues. Cuba’s negative influence in Venezuela—notably through its intelligence service and Armed Forces, which play key advisory roles shaping Venezuelan domestic policy —is evident in the Maduro regime’s increasingly authoritarian tactics and human rights abuses. This relationship is symbiotic, as Cuba receives oil and financial support in exchange for keeping the Maduro regime afloat.

Venezuela has long provided a permissive environment for narco-terrorist groups and Lebanese Hezbollah supporters, and is a transit country for the smuggling of illicit drugs and SIAs. The continued assault on democratic institutions provides increased space for illicit actors to operate with impunity, and for Russia, China, and Cuba to expand their influence over the corrupt Maduro regime. The next few months will likely prove critical, with a presidential election, continued economic deterioration, and widespread shortages of medicine, food, electricity, and consumer goods.