Electoral Fraud and Irregularities in Nicaragua 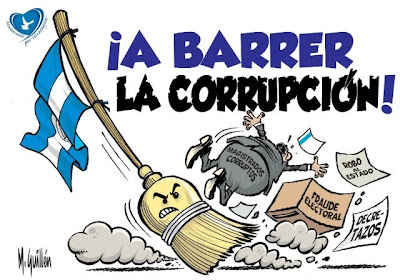 Sweep away the corruption: Corrupt Magistrates, Electoral Fraud, Stealing from the State, Decrees
The circumstances leading to the elections on Sunday in Nicaragua where one of the presidential candidates, the incumbent Daniel Ortega, shredded the constitution in order to be placed on the ballot to run for a third term were already suspect. The Los Angeles Times laid out the background:

The Nicaragua constitution forbids a person from serving as president more than twice, and from succeeding himself or herself. Ortega was ineligible on both counts. But since his second election as president in 2007 (after an earlier stint 1984-90) Ortega succeeded in placing supporters in key posts on the courts and electoral bodies. Last year the Nicaraguan Supreme Court, at Ortega’s behest, ruled that term limits were unconstitutional, clearing the way for the 66-year-old to run again.

Depressing enough without taking into account Ortega's and the Sandinista Party's financing by drug cartels exposed by wikileaks and the creation of paramilitaries and state security to repress and spy on the political opposition.

The news at the end of the day describes a stolen election with violence and a lack of transparency. The Miami Herald reported that "voting was marred by scattered violence, including reports of gunfire that wounded four people near the coffee-growing city of Matagalpa and arson attacks on several rural precincts." The Carter Center sent a group to visit Nicaragua during the elections but did not participate as election observers according to CBC due to restrictions placed by the Nicaraguan government. International observers from both the European Union and the Organization of American States expressed their reservations about the electoral process:

"I don't understand why there are so many obstacles, so much opacity and so many tricks in a process that should be clean and transparent," Yanez said, adding that some precincts opened late, blocked opposition election monitors and filed vote tallies that were illegible.

Dante Caputo, a former foreign minister from Argentina who heads an observer mission from the Organization of American States, said obstacles were tantamount to a disavowal by the Ortega government of accords to allow election observers.

At least 10 OAS teams arrived at key precincts around the country where they were to monitor voting and ballot counting only to be told they could not enter, Caputo said.

"We faced a series of difficulties ... We were blocked from being where we were supposed to be. This kind of situation has not happened before. It is worrisome," Caputo said.

Both the violence and lack of transparency on the part of the Ortega government are demonstrations of weakness and no doubt that if the elections were properly held he would lose. Mohandas Gandhi's observation that "Truth never damages a cause that is just" is being demonstrated in Nicaragua and that what Ortega and the Sandinistas are doing is unjust. Hence the lies.

With 6% of the vote reported Daniel Ortega obtains 66% of the vote and most likely control of the legislature in order to follow the example of Chavez in Venezuela in undermining democracy in Nicaragua.

The Movement for Nicaragua has placed the above reproduced cartoon on its twitter page calling for sweeping out corruption. Unfortunately, the results tonight indicate that the elections in Nicaragua rather than being a democratic exercise that legitimizes the political system will create greater instability and insecurity in the country. The people of Nicaragua are in my prayers and thoughts at this difficult moment in their history.
Posted by John Suarez at 12:48 AM