International Day of the Victims of Enforced Disappearances: Some of the forgotten Cubans

When human rights defenders are silenced, who will stand up for the rights of all?  - Amnesty International 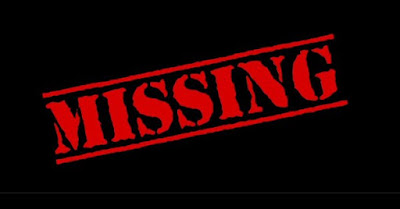 Today, August 30th, is the International Day of the Victims of Enforced Disappearances and you won't hear much about the disappeared in Cuba. However there are cases such Omar Darío Pérez Hernández, a Cuban independent journalist who went missing in Cuba in December 2003. 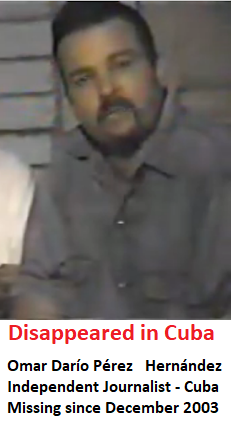 There have been others that stretch back decades.  Andrew de Graux Villafana was just 19 years old when he went missing on September 18, 1962.  Andrew had fought in the Escambray hills against the Castro dictatorship, and was wounded and captured. 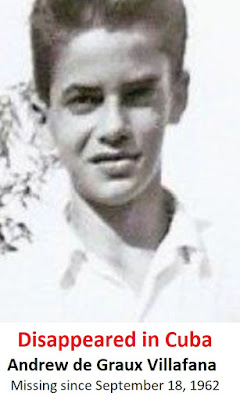 Andrew had a successful surgery carried out by Dr. Miguel Rodriguez Marcoleta. However when the surgeon went to visit his patient, he could not find him. He went to the morgue to try to see the body, but it was not there. Days later State Security came and asked Dr. Rodriguez Marcoleta to sign the death certificate of Graux Villafana, but he refused.  Decades later Andrew's sister, Mary de Louise de Graux Villafaña, continues to search for her brother and expresses concern for other missing youth who took up arms against the Castro dictatorship.

There are other cases such as opposition activist Enrique Mustelier Turro, who was jailed for his opposition activities.  The wife of the jailed activist went to prison to visit him, she was told by prison officials that Enrique Mustelier Turro had escaped. No one has seen or heard from him since 2013. According to his son, Enrique Mustelier Sosa, he believes that his father died in the prison.  He has received threats from State Security in an effort to silence him, as have others dealing with other missing loved ones. Lawyers have warned him that if he tries to open an investigation that he could be the next to go missing.

There is not much documentation on the disappeared in Cuba because human rights defenders that have attempted to investigate these kind of cases have paid a high price. Francisco Chaviano González, a former mathematics teacher, and human rights defender was the president of the National Council for Civil Rights in Cuba (Consejo Nacional por los Derechos Civiles en Cuba - CNDCC), an organization that was trying to investigate the cases of a number of Cubans who had gone missing.

Francisco was  warned by state security to stop his human rights work and leave Cuba or he would be arrested and sentenced to 15 years in prison. He refused to leave, continued to investigate cases of missing Cubans and was detained on May 7, 1994, drugged and subjected to a military trial and sentenced to 15 years in prison of which he served 13 years in terrible conditions suffering numerous beatings and the denial of healthcare which led to a wholesale decline in his health. Amnesty International recognized him as a prisoner of conscience. He was released in August of 2007, and went into exile in 2012.