#VigiliaMundial #WorldVigil united for the victims of repression in Bolivia, Nicaragua, Venezuela and Cuba

"When bad men combine, the good must associate; else they will fall one by one, an unpitied sacrifice in a contemptible struggle." - Edmund Burke 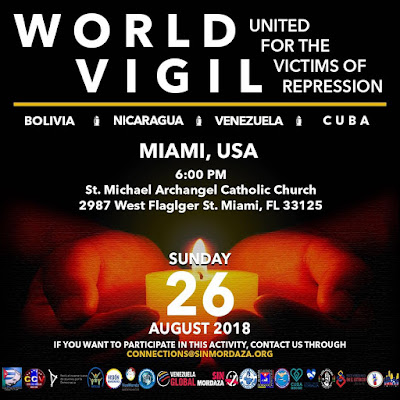 On Sunday, August 26, 2018 at 6:00pm at St. Michael Archangel Catholic Church in Miami, Florida people of goodwill gathered together for victims of repression in Bolivia, Nicaragua, Venezuela and Cuba as part of a world vigil united for the victims of repression. Hopefully this will be the beginning of new tradition to be observed annually where friends of freedom gather and network in order to collaborate in the struggle for liberty in the hemisphere.


The enemies of liberty have been gathering regularly for decades at the São Paulo Forum, and its most recent addition was held in Havana back in mid July 2018. The members of the Forum backed Daniel Ortega and his Sandinista Party despite their mass slaughter of civilians.

For far too long democrats in this hemisphere have failed to join together in solidarity against those suffering under tyranny and others have fallen, one by one, failing to arouse sympathy or solidarity in far too many remaining in freedom. This is a recipe for disaster.

However this past Sunday across the world people of goodwill gathered around the world for victims of repression in Bolivia, Nicaragua, Venezuela and Cuba. This was a good start.Let us pray that it is repeated in years to come.

If we do not join together to resist tyranny, support the rule of law, liberty, and the freedom of all prisoners of conscience then the list of countries succumbing to tyranny will continue to grow until freedom is extinguished in this hemisphere.

Therefore it is imperative for people of goodwill to join together in networks of freedom to counter totalitarian networks that seek to enslave free peoples. Free peoples must remain vigilant and not succumb to the complacency of living in freedom, only to lose it.

Oswaldo Payá Sardiñas on December 17, 2002 addressing the European Parliament observed that  “the cause of human rights is a single cause, just as the people of the world are a single people. The talk today is of globalization, but we must state that unless there is global solidarity, not only human rights but also the right to remain human will be jeopardized.” The world is witnessing his prophetic vision in Venezuela, Nicaragua, Bolivia, and Cuba. The distancing away from human rights has had dire consequences in these countries.

Witnessing these democrats and human rights defenders gathering together all over the world does give one hope for the future, but it must go beyond a symbolic act, to sustained concrete coordination and action.

These vigils took place in many other places around the world, but there is not sufficient space to cover all of them.