Will the world listen? 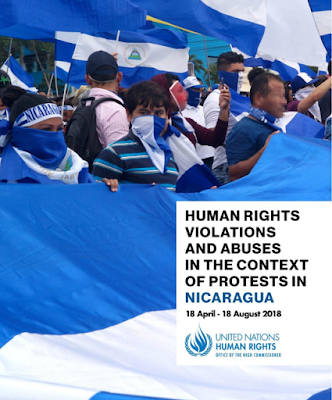 The following series of tweets by the Office of the UN High Commissioner for Human Rights speaks volumes.


These are a remarkable series of tweets that indicate that events in Nicaragua are reaching a desperate state. Nevertheless the number of extrajudicial killings in the tweet below are much lower than current reports that place them at over 450.

#HumanRights crisis in #Nicaragua ➡️ some 300 people have reportedly been killed and 2,000 others injured, according to various sources. Most of the violence took place from mid-April to mid-July 2018. Read: https://t.co/V7JD6kBtib pic.twitter.com/Eu63qeVtZD
— UN Human Rights (@UNHumanRights) August 29, 2018


The exodus from Nicaragua is another sign of the draconian and repressive measures of the Sandinista regime led by Daniel Ortega.

#Nicaragua – action & accountability needed. Many people who participated in April protests, defended #HumanRights or expressed dissenting views, have been forced to hide/leave the country or are trying to do so – UN report: https://t.co/V7JD6kBtib pic.twitter.com/4SKcdhPaQE
— UN Human Rights (@UNHumanRights) August 29, 2018

One question that lingers and is cause for concern is that  Zeid Ra’ad Al Hussein will soon leave and be replaced by former Chilean President Michelle Bachelet, who has a track record of looking the other way on human rights abuses in Venezuela, Cuba and Nicaragua.
Posted by John Suarez at 11:36 PM