Canadians get sick on holiday in Cuba and travel agency ignores the source of the illness.

When a free vacation becomes expensive.

Canada's Sunwing travel agency pitches Cuba as "Paradise…with a history." However it fails to mention some of the health risks of traveling to the tropical island and have been sued in the past. Now they have some more bad press coming their way because eight Canadians caught a serious illness in a cave in Cuba, but the travel agency continues to promote the trip without mentioning the health risks.

Doctors told her it looks like cancer, a month later and Newfoundland woman Terri Murphy now knows she and seven others contracted a deadly disease while vacationing in Cuba. The details at 6. @NTVNewsNL pic.twitter.com/RxAM4TvwN7
— Leila Beaudoin (@LeilaBeaudoin) June 28, 2019

Lamentably it is not only Sunwing. In September 2017 when Hurricane Irma, a deadly category five storm with 180 mile per hour winds was bearing down on Cuba and a hurricane watch issued, tourists were still being flown into the island by British and Canadian travel agencies.

The British travel agency "Thomas Cook has defended itself saying the company followed the Cuban government's emergency instructions to the letter," BBC News reported. Cayo Coco suffered the full impact of Hurricane Irma and was destroyed by the storm. They were flying tourists into Cuba to Cayo Coco a day prior to the storm's arrival, as reported by The Independent (United Kingdom).

Then again, the Cuban government covered up thousands of Zika cases in 2017 and placed pregnant women and their unborn children in danger who visited the island on vacation. CTVNews.ca citing a report from NTV’s Leila Beaudoin published  the following in an article today:


A Newfoundland woman, who said she contracted a disease linked to bat droppings during a trip to Cuba, is warning other travellers to avoid cave excursions on the island.

Terri Murphy, 34, said she is one of eight Newfoundlanders to come down with cave disease, also known as histoplasmosis, during a trip to Veradero earlier this month. Others are being tested, she said.

“My life has been altered. I can’t do what I used to do,” Murphy told NTV News on Friday.

A Newfoundland woman says she contracted cave disease after visiting the destination.  The mother of two won an all-inclusive vacation to Veradero in the spring through Sunwing Airlines.

During the trip Murphy visited Cueva Saturno, or Saturn Cave, a destination included in a Sunwing excursion.  Murphy said she didn’t notice anything wrong until about two weeks after arriving home when she woke up in the middle of the night covered in sweat and unable to breathe.  “I actually thought that I was coming down with the flu,” she said.  As her condition worsened, Murphy decided to go to hospital.

The woman said cancer-like nodules showed up on her lungs, and doctors struggled to diagnose her. But then, Murphy said, doctors began to make connections between the woman’s case and those of other recent travelers to the tropical destination.  “They contacted Eastern Health and said, ‘We have a group of travelers that went on the exact same excursion together and they’re sick,’” Murphy said.

Cave disease is a condition associated with bird and bat droppings. It is especially common in caves and is spread when a person breathes in tiny, microscopic fungal spores. Complications from the disease can last up to a year, depending on the severity of the case.  Murphy recalled seeing bats flitting throughout the cave.  “Everywhere. They were everywhere,” she said.  Murphy said she decided to take her story public after learning that Sunwing still offers the cave excursion to travelers.

Sunwing responded in a statement, saying: “We are not aware of any customer complaints regarding histoplasmosis or any other disease or health issue related to either this excursion or to any of the other excursions that we operate.”  Newfoundland health officials issued a statement Friday afternoon warning international travelers of cave disease.

“Symptoms can include cough and chest pain, shortness of breath, fever and chills, headaches and flu-like illness. If you feel you may have contracted histoplasmosis, please contact your healthcare provider or proceed to the nearest emergency department,” Eastern Health said in a Facebook post.

Tourists and prize winners beware these travel agencies are ignoring important health issues for profit. We've seen this also in the Dominican Republic recently with the deaths of a number of Americans on vacation there. 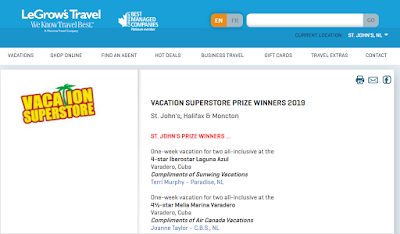