The Castro regime has the custom of declaring that the U.S. has "no moral authority" to criticize the systemic human rights violations that go on in Cuba. However, officials from the dictatorship do not follow their own advice. 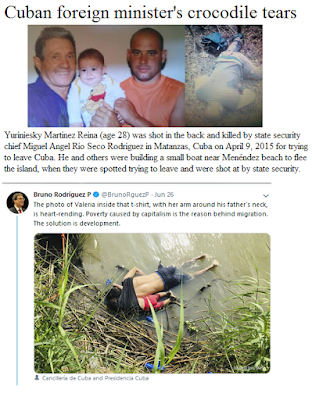 Last week on June 26th, Cuban Foreign Minister Bruno Rodriguez tweeted about the tragic death of Óscar Alberto Martínez Ramírez and his daughter Valeria, two refugees, who drowned trying to reach the United States.  Castro's foreign minister blamed capitalism for causing the poverty that led to their desire to migrate. These are crocodile tears and recent Cuban history bears this out.

On December 16, 2014 the Cuban coastguard ram and sank a boat with 32 refugees, one of them, Diosbel Díaz Bioto, went missing and is assumed drowned.

Yuriniesky Martínez Reina, age 28, (pictured above in organge) was shot in the back by state security chief Miguel Angel Río Seco Rodríguez in the Martí municipality of Matanzas, Cuba on April 9, 2015 for trying to leave Cuba. He was part of a group of young men building a boat near Menéndez beach to flee the island, and were shot at by state security when they were spotted trying to leave.  Yuriniesky was found face down in some brush two days later by his brother.

These are not isolated cases but a pattern that stretches back decades. The Castro regime has a history of extreme cruelty against Cuban refugees and migrants, and those who try to document what happens to them. Below is a partial accounting. 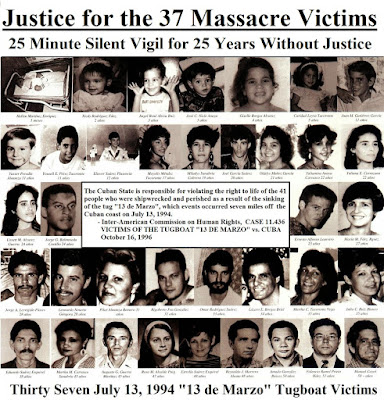 July 13th will mark 25 years since the sinking of the "13 de marzo"tugboat massacre were 37 Cubans, of which 11 were children, were massacred by Castro regime agents six miles from the Havana coast line. Wrote about this crime in greater detail on June 13th and quoted some of the observations made by Oswaldo Payá Sardiñas on the incident. However the previous post failed to list the names of the 37 massacre victims, all killed on July 13, 1994. Below are the names listed by age.

One year earlier eyewitness accounts from the Guantanamo Naval Base reported crimes against humanity.  U.S. soldiers patrolling the perimeter of the base were surprised by the sounds of explosions then horrified by what they observed. This led to a formal diplomatic note to the Cuban government by the Clinton Administration. This in turn led to a front page story in The Miami Herald on July 7, 1993 which described what had been witnessed:

Cuban marine patrols, determined to stop refugees from reaching the U.S. Naval Base at Guantanamo Bay, have repeatedly tossed grenades and shot at fleeing swimmers and recovered some bodies with gaff hooks, U.S. officials charged Tuesday. At least three Cubans have been killed in the past month as Cuban patrol boats attacked swimmers within sight of U.S. Navy personnel at Guantanamo.

Human rights defenders who attempted to quantify the numbers of dead or missing refugees were targeted by state security and made a cautionary example. Francisco Chaviano González, a former mathematics teacher, and human rights defender was the president of the National Council for Civil Rights in Cuba (Consejo Nacional por los Derechos Civiles en Cuba - CNDCC), an organization whose work included "documenting the cases of Cubans who have been lost at sea trying to leave the country."


Chaviano was trying to investigate the cases of a number of Cubans who had gone missing. He was  warned by state security to stop his human rights work or he would be arrested and sentenced to 15 years in prison. He refused to leave and was detained on May 7, 1994, drugged and subjected to a military trial and sentenced to 15 years in prison of which he served over 13 years in terrible conditions suffering numerous beatings and the denial of healthcare which led to a wholesale decline in his health. Amnesty International recognized Chaviano as a prisoner of conscience. Chaviano was released on August 10, 2007. He was forced into exile in 2012.

The Cuban government with these draconian measures has succeeded in preventing systematic reporting of its worse crimes. According to the 1993 U.S. protest note, U.S. military guards surveying the bay witnessed five separate incidents:

* On June 19 at 2 p.m., U.S. guards, startled by the sounds of detonations, saw Cuban troops aboard patrol boats dropping grenades in the paths of several swimmers headed for the U.S. base.
* On June 20 at 1:30 p.m., Cuban troops repeated the action, then strafed the water with machine-gun fire.
* On June 26 at 11 a.m., three patrol boats surrounded a group of swimmers, lobbing grenades and spraying them with automatic weapons fire. At least three corpses were lifted out of the water with gaffs.
* On June 27 at 11:30 a.m., guards aboard patrol boats lobbed two grenades into the water.
* The same day, just before 3 p.m., a patrol boat opened automatic fire on a group of swimmers, who were later seen being pulled from the water. The swimmers' status was unknown.

In a July 22, 2007 interview in El Nuevo Herald, Amado Veloso Vega described what happened to him in 1992 when he was just 21 years old and trying to leave Cuba "managed to crawl through the third barrier between Cuban territory and the U.S. Naval Base at Guantanamo when the warning flares lit the night sky."  He thought he'd stay in "no-man's land." till dawn, confident the Cuban guards could not enter. "But then he heard shots, and when he tried to move, a mine exploded, destroying his legs and flinging him 15 feet.

With no strength to shout, Veloso lay there until he heard the soldiers approach." "Strips of flesh dangled from my legs. I was disfigured and my mouth was torn," he recalled.  One of the soldiers said that he "wouldn't make it alive" to the hospital in Guantanamo. According to Amado,  they started to play with him. They bayoneted him in the hand and in the leg and then pulled him off the fence. Veloso showed his scars.  They took him directly to the morgue. There, a doctor wouldn't give up, injecting him with adrenaline. Veloso was revived.  For attempting to leave, he was sentenced Veloso to two years house arrest at his Havana home. Veloso tried to remake and requested prosthetic legs at a Havana hospital. According to Amado, "[t]hey concluded that my accident was due to my attempt to leave the country illegally and told me the (prostheses) they had were for revolutionaries and fighters back from Angola."   They refused to give him the prostheses. 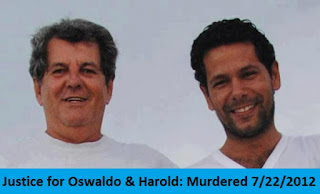 Oswaldo Payá Sardiñas who spoke out on the July 13, 1994 "13 de marzo" tugboat massacre was killed on July 22, 2012 along with Harold Cepero in what appears to have been an extrajudicial killing arranged by the Castro regime's secret police.

This history must not be relegated to an Orwellian memory hole because impunity breeds repetition, and costs more lives. The Castro regime must be held to account. As should all who engage in acts that violate human rights and dignity wherever they are.

On July 10th at 8pm there will be a 25 minute silent candlelight vigil in front of the Cuban Embassy in Washington, DC. Over the past 25 years the days leading up to this grim anniversary have been marked by protests and vigils inside and outside Cuba. If you are in the DC area and wish to take part in a solemn and nonviolent protest then please join us. Elie Wiesel  was right, “For the dead and the living, we must bear witness.”