#Tiananmen30: A reflection and call to action

In memory of those who stood up for their rights, lost their lives and for those still unjustly imprisoned today in China.

Thirty years ago tonight it began.

The Pro-Democracy Movement that had taken to the streets in April of 1989 was violently crushed by the Chinese communist dictatorship beginning on the evening of June 3, 1989. By dawn on June 4, 1989 scores of demonstrators had been shot and killed or run over and crushed by tanks of the so-called People's Liberation Army.

Thousands more would be rounded up, arrested and sentenced to prison in show trials. As many as a thousand received death sentences that were carried out.

The response of the West and the United States at the forefront?  Pro forma protests to satisfy the outrage of their citizens while secretly meeting with the men who had ordered the mass killing to let them know that what was important was their economic relationship.

Thirty years ago I was an undergraduate at Florida International University studying biology. The first months of 1989 filled one with hope as events began to unfold favorably in Poland and in the rest of the Eastern bloc. In April mass demonstrations by Chinese students demanding accountability, an end to corruption, and democratic reforms began and seemed to be part of a worldwide democratic wave. In Eastern Europe, with the exception of Romania, the autocrats refused to fire on large gatherings of nonviolent protesters, and in relatively short order they were free.

This was not to be the case in China. The communist Chinese leadership had attempted to order their troops to crackdown on the Chinese students on May 20, 1989 only to have their orders rejected.

The Chinese communist leadership regrouped and sought out troops who would obey their criminal orders and on June 2, 1989 approve the decision to crackdown on the protesters in what became a massacre.

Still remember the scenes from television broadcasting images of the crackdown over the two days that followed and then seeing the image of an outraged Chinese citizen staring down a column of tanks, and for several long moments blocking their passage. Thirty years later we do not know who he was or what became of him.

At Florida International University (FIU) members of the FIU Chinese Student Association made a memorial banner for their fallen brothers and sisters that read in Chinese, Spanish and English the following: "We mourn in deep grief for the numerous martyrs who have given their lives for democracy and freedom in China."

Chinese students from Florida International University (FIU), the University of Miami (UM) and Florida Atlantic University (FAU) organized and carried out a protest march in downtown Miami in the days following the massacre.

The Cuban government was one of the very few that publicly supported the June 4th crackdown on Chinese protesters. The Cuban foreign minister commended Chinese authorities for“defeating the counter revolutionary acts.” Later we would learn that these scenes played out in 20 other cities in China along with the huge massacre in Beijing, the terror inflicted on the Chinese people over those days began to be placed in context, despite the full number of dead still not being known.

A 2017 declassified British diplomatic cable revealed that "at least 10,000 people were killed in the Chinese army's crackdown on pro-democracy protesters in Beijing's Tiananmen Square in June 1989."


The failure of the Western Democracies to side with China’s democratic forces due to narrow economic interests to trade and subsidize a murderous communist dictatorship was a sobering realization that prepared me for what has been taking place in Cuba.

The behavior of Western tech firms in China, who collaborated with the secret police in identifying dissidents who were rounded up, jailed, tortured and in some cases killed and censoring information on the internet to erase the crimes of Tiananmen, the Cultural Revolution, and the mass famines of the Mao era was a wake up call and prepared us to have a more critical eye when they signed agreements with the Castro regime.

Those days in June of 1989 marked me and impacted the course my life would take. In the years that followed we engaged in acts of remembrance with Chinese students, protested and burned a Chinese flag when a Chinese official spoke at FIU in 1991 and hosted Chinese dissident Harry Wu at FIU.

Elie Wiesel at his Nobel Lecture in 1986 observed: "There may be times when we are powerless to prevent injustice, but there must never be a time when we fail to protest." Bearing witness and taking action continues to be necessary to avoid forgetting. Wiesel in the same lecture explained the consequences of not remembering: "To forget the victims means to kill them a second time. So I couldn't prevent the first death. I surely must be capable of saving them from a second death." 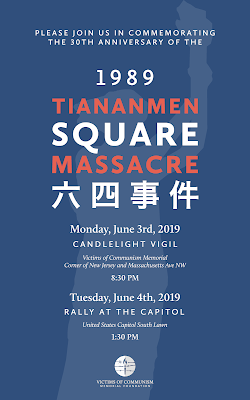 Please join us at the US Capitol for a rally to commemorate the 30th anniversary of the Tiananmen Square Massacre and to highlight the continued suppression of the Chinese people by the Chinese Communist Party. Speakers will include witnesses of the Tiananmen Square Massacre in 1989, activists, and policymakers, including VOC Caucus Co-Chair Rep. Chris Smith (R-NJ) and Co-Chair of the Congressional-Executive Commission on China Rep. Jim McGovern (D-MA).