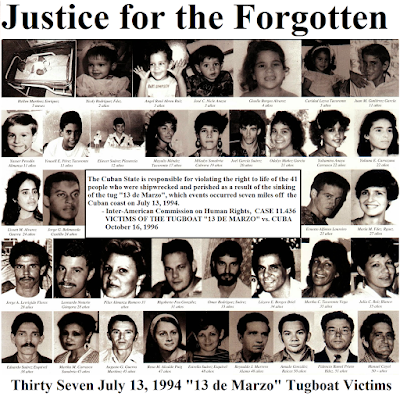 Wednesday, July 13, 1994 at three in the morning three extended Cuban families set out for a better life aboard the "13 de Marzo" tugboat from Havana, Cuba and were massacred by Cuban government agents.

The most extensive international report on the what took place is by the Inter-American Commission on Human Rights and is available on-line. Fifteen years later human rights defender Oswaldo Payá Sardiñas, national coordinator of the Christian Liberation Movement, reflected on what had happened:

The man who denounced the "13 de Marzo" tugboat massacre would himself become a martyr of the same dictatorship along with Harold Cepero, a youth leader from the Christian Liberation Movement.
Seven years ago on July 22, 2012 on a stretch of road in Eastern Cuba, State Security agents rammed the car Oswaldo Payá Sardiñas and Harold Cepero Escalante were traveling in. Both bodies appeared later that same day.

One month from today will mark 25 years since 37 Cubans were killed for wanting to live in freedom. Eleven of them were children, and nine days later we will remember two men killed seven years ago for non-violently advocating for freedom in Cuba.

They must not be forgotten, and the demand for justice continued.