11J Two Months Later: A reflection and a look back

Down with the dictatorship. Homeland and Life.

Today marks two months since Cubans across the island took to the streets in over 50 cities and towns calling for freedom and an end to the Castro dictatorship on July 11, 2021.

A protester from San Antonio de los Baños told BBC Mundo that the initial protest was organized on Saturday[July 10, 2021] through social networks for Sunday [July 11, 2021] at 11:30 AM (local time). Reuters on August 9th reported in more detail on the social network used, and its background confirming the initial reporting by the BBC. On Sunday July 11, 2021 in the late morning hundreds of Cubans took to the streets of San Antonio de los Baños and were soon joined by thousands more.

Thinking that this would be a replay of the August 5, 1994 Maleconazo the Castro regime sent out its repressive forces to quell the protest in in San Antonio de los Baños, and President Diaz-Canel arrived to the protest site to claim that all had been returned to normal, but it was too late the protests had been seen through social media and multiplied across Cuba.

The non-violent protests continued and spread across Cuba with Cubans chanting "the streets belong to the people", "Homeland and Life", "Freedom", "We are not afraid", and "Down with Communism". Tens of thousands of Cubans marched in over 50 cities and towns in the island nation beginning on July 11, 2021 and were met with threats, violence, mass arrests, and deadly force.

President Miguel Diaz-Canel, in a public address the same day threatened: "They [protesters] would have to pass over our dead bodies if they want to confront the revolution, and we are willing to resort to anything.  What did Cuba's top official mean by this? Diaz-Canel did not mince words: "We are calling on all the revolutionaries of the country, all the communists, to take to the streets and go to the places where these provocations are going to take place today from now on, and in all these days and face it decisively, firmly, with courage." The Castro regime's president concluded declaring "the order of combat is given, revolutionaries take to the streets."

Regime officials went into work places and required workers to agree to get on buses to go and beat up demonstrators. Images emerged of buses filled with workers handed sticks and baseball bats before being sent into the fray.

Following the start of the protests on July 11th the military presence increased across the island, along with paramilitaries carrying out house to house searches for protesters, and beating them down in the street.

A Cuban priest was beaten up, and arrested by secret police on July 11th for peacefully assembling, but lived to tell his story. Others were not so lucky.

Havana officially recognized one Cuban killed during on July 12th during the protests, Diubis Laurencio Tejeda, (age 36). He was shot in the back by regime officials on day two of nationwide protests in Cuba. NGOs placed the number at five, but the total number remains unknown. Reports have been received that family members of those killed have been threatened to remain silent. This coincided with press reports that Laurencio Tejeda's mother, distraught over her son's death, had committed suicide. Video emerged on July 15th of the aftermath of Diubis being shot in the back and posted over Twitter.

Massive protests would continue through July 13th. Many Cubans in the island and the diaspora remember and observe the sinking of the "13 de marzo" tugboat on July 13, 1994 by Cuban government agents killing 37 men, women, and children. July 13th holds a great resonance for many Cubans on the criminal nature of the Castro regime.

On July 14, 2021 the Cuban Prime Minister Manuel Marrero appeared on television and announced that the dictatorship would "temporarily lift restrictions on the quantity of food and medicine incoming travelers could bring into Cuba."

Summary trials began to be carried out jailing hundreds of protesters. In many of the trials lawyers were not provided. Independent media sources in the island estimated that over 5,000 Cubans had been detained or disappeared.

On July 16th, Maria Ferreiro expressed concern that “her son, Henry Constantin Ferreiro, was among those taken into custody. ‘They are journalists, not criminals,’ she said. Ferreiro said her son has been charged with public disorder and incitement, and she hasn’t been able to speak to him,” reported WSVN .

General Raul Castro reappeared in the official media when the protests erupted, and was reported attending high level meetings and was present at the pro-regime rally organized on July 17, 2021 where anti-government protester briefly appeared, was beaten down, and taken away.

On July 21, 2021, CFC invited media to listen to and ask questions of Katiuska Mustelier, sister of detained Cuban protester Enrique Mustelier.  Her brother was brutally beaten and arrested in the city of Guantanamo during the July protests in Cuba and remains jailed in isolation.

On July 27th the Christian Liberation Movement announced a campaign to isolate the Castro regime internationally with eleven concrete measures, including economic sanctions.

Journalist Frances Robles reporting in The New York Times on August 17th described how "after Cuba’s prime minister, Manuel Marrero Cruz, said that Cubans were complaining more about doctors and their poor service than they were about the shortages ... nearly two dozen young physicians and medical students took to social media to state, one by one: “I am publicly declaring that doctors are not to blame for the collapse of the public health system.”

On August 18, 2021 the Cuban dictatorship brought Decree-Law 35 into force to stop dissenters from harming "the prestige of the country", and in practice trying to silence Cubans. One of the first to be targeted was Yoel Acosta, of PalenqueVision, was fined more than a months wages (2000 pesos), and threatened with prison if he didn't pay. 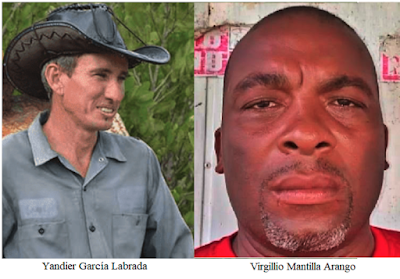 Cuban human rights defenders attempting to document the situation on the island face threats not only against themselves, but against their families. On August 23, 2021 it was also demonstrated that living in the diaspora does not protect you from these threats. State Security visited the mother of exiled Cubalex executive director Laritza Diversent and telling her "that she could end paying for her daughter’s work."  Her daughter has been compiling information on Cubans detained and disappeared during the July 2021 protests, and has worked on these human rights issues for years in Cuba, but was forced to seek refuge abroad in 2017.

Pablo Moya Delá died on August 26, 2021 at the Clinical Surgical Hospital in Santiago de Cuba. He was jailed on October 23, 2020 for protesting socioeconomic conditions and overall repression. Beaten, mistreated for months, weakened following a hunger strike and after destroying his health released on probation earlier this month near death. This is a practice the dictatorship has used in the past.

68-year-old Felix Navarro Rodriguez was arrested and charged with public disorder while inquiring about detainees the day after the protests in the city of Matanzas, 55 miles east of Havana. Full disclosure, Mr. Navarro Rodriguez is a Cuban human rights defender, and the Castro regime does not recognize that category as legal. Protesting his unjust imprisonment,  Felix initiated a hunger strike on August 23rd and has maintained it to the present day. He is currently weighing in at 132 pounds. We fear for his life.

Hundreds, arrested during and after the July 2021 protests remain behind bars.  Human rights defender Sebastian Arcos Cazabon wrote an important article published in 14ymedio today that analyzes the present moment the dictatorship finds itself in.