Rolling Stone Magazine on September 15, 2021 placed Celia Cruz's, 'La Vida Es un Carnaval' as the 439th greatest song of all time.  Below is the image and text provided by the publication. 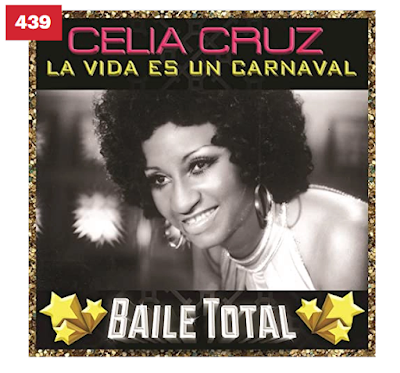 Celia Cruz had a voice that combined opulent, operatic tones with the Afro-Cuban call-and-response style of pregón — and her legendary roar was at its most august and powerful extolling the joy of being alive on 1998’s triumphant “La Vida Es un Carnaval.” The song was especially potent coming from Cruz, who came to New York and helped shape the salsa movement following a painful exile from Cuba in the Sixties. “La Vida Es un Carnaval” became a life-giving anthem for audiences and marked a stunning final act of her formidable career.

They mention "a painful exile from Cuba in the Sixties," but it is worth exploring this chapter of her life, and mean spiritedness of the Castro dictatorship following her death on July 16, 2003. She laid in state at the Freedom Tower in Miami where some 200,000 Cubans paid their respects.

The mourning for Celia was nearly universal, except in her homeland Cuba where the official media printed a small note on her passing recognizing Celia as an “important Cuban performer who popularized our country’s music in the United States,” it went on to say that “during the last four decades, she was systematically active in campaigns against the Cuban revolution generated in the United States.”

It is necessary to revisit an early episode that illuminates the clash between Celia and Fidel in the early days of the Cuban Revolution, and the manipulative character of Castro, and the brilliance of the Cuban artist to recognize it when many others did not.

Fidel Castro had tried to create a situation that forced the salsa singer to pay him homage, but she refused. Salserísimo Perú, a Youtube site created in Peru by three journalists to share information on salsa and tropical music offers a history of Celia Cruz's first "encounter" with Fidel Castro.

"In the early months of 1959, Celia Cruz was hired to sing with a pianist at the house of the Cuban businessman Miguel Angel Quevedo.  Quevedo owned the magazine Bohemia, the most influential in Cuba and who had supported the revolution in the last few years.  The guerrilla movement with a certain Fidel Castro in front proclaimed in Santiago the beginning of the revolution. At that moment Celia enjoyed great popularity for "Yebero Moderno", "Tu voz" and "Burundanga" songs she had recorded with the Sonora Matancera. As a guest artist of Rogelio Martinez's group the Guarachera (Celia) was free to accept other contracts as a soloist. This allowed her to show her talent on different radio stations in Havana, and perform in Mexico, Venezuela, and Peru. Since the regime of Fidel took power, it had begun to systematically seize businesses, radio and television stations. [Fidel Castro speaking: 'The revolution was something like a hope and that joy, possibly, prevented us from thinking all that we still had to do.' For the Guarechera, Fidel was ending free expression and the arts in her country.  The night of the show in the home of Quevedo, Celia was singing standing next to the pianist,  when suddenly the guests started to run to the front door of the house. Fidel Castro had arrived.  Neither she nor the pianist moved and continued singing. Suddenly, Quevedo approached Celia and told her that Fidel wanted to meet her because in his guerrilla days, when he cleaned his rifle he was listening to Burundanga. Celia replied that she had been hired to sing next to the piano, and that was her place. If Fidel wanted to meet her, he would have to come to her.  But the commandant did not do that."

Since Celia Cruz refused to bow to the new dictator, and wanted to continue to live the life of a free artist, she had to leave Cuba. However, when her mom was ill she tried to return to see her in 1962, but was barred from entering the country by Fidel Castro. When her mother died Celia was again blocked by the dictatorship from attending her funeral. Because she was not an active supporter of the regime, her music was banned in Cuba.

The Cuban government and its agents of influence have attempted to pretend that things have changed with regards to artistic freedom in Cuba, but the reality of the blacklist continues.

There was only one problem. It was not true. Diario de Cuba reported on August 21, 2012 that Tony Pinelli, a well known musician and radio producer, distributed an e-mail in which Rolando Álvarez, the national director of the Cuban Institute of Radio and Television Instituto Cubano de Radio y Televisión (ICRT) confirmed that the music of the late Celia Cruz would continue to be banned. The e-mail clearly stated: "All those who had allied with the enemy, who acted against our families, like Celia Cruz, who went to sing at the Guantanamo Base, the ICRT arrogated to itself the right, quite properly, not to disseminate them on Cuban radio."

Take that in for a moment. The dictatorship that would not let her return to her homeland for her mother's funeral in 1962 attacked her for returning to the only part of Cuba the dictatorship does not have control over, the U.S. Guantanamo Naval Base where she bent down and collected Cuban soil to take back into exile.

She remains on the Castro regime's blacklist 18 years after her death, but she is not alone.

According to the 2004 book, Shoot the singer!: music censorship today edited by Marie Korpe there is increasing concern that post-revolution generations in Cuba are growing up without knowing or hearing censored musicians such as Celia Cruz, Olga Guillot, and the long list above, and that this could lead to a loss of Cuban identity in future generations. This process has been described as a Cuban cultural genocide that is depriving generations of Cubans their heritage.

Thankfully, the rest of the world celebrates the greatness of her music, and with the internet and software to evade regime censorship Cubans on the island are listening to her too.