National Day for the Victims of Communism: Remembering those killed and the courageous Poles that twice saved the world

Today is the day that Americans set aside to remember the victims of communism around the world.

We owe it to both the victims of communism from the past and of today to remember them and denounce what has happened and is still happening now in order to finally bring an end to the communist death toll. Below is a partial list of the dead reaches 102.566 million dead.

In addition to remembering the over 100 million victims in the 20th century alone, also recall the 101st anniversary of "the Polish victory against Vladimir Lenin’s Bolsheviks in the Battle of Warsaw. Known as the Miracle on the Vistula, the Polish heroes of this battle halted the spread of communism in Europe for decades."

Today, Cubans remember the tens of thousands of victims of Cuban communism under the dictatorship of the Castros. The Victims of Communism Memorial Foundation has highlighted three cases: Oswaldo Payá Sardiñas, Harold Cepero Escalante, and Sirley Ávila León.

Below is the video that highlights the killings of Oswaldo and Harold in 2012:

Below is the video that highlights the brutal assault against Sirley Avila Leon in 2015:

One week from today Cubans around the world will be engaging in solidarity protests with their brothers and sisters on the island that have announced civic marches across  the island on November 15th.

In Washington, DC Cubans and friends of a free Cuba will gather on Sunday, November 14th at Meridian Hill Park at 2:00pm and at 3:00pm will set out in a short prayer walk to the Cuban Embassy down the street followed by an hour of prayer, poetry readings, and music that will conclude at 4:00pm. 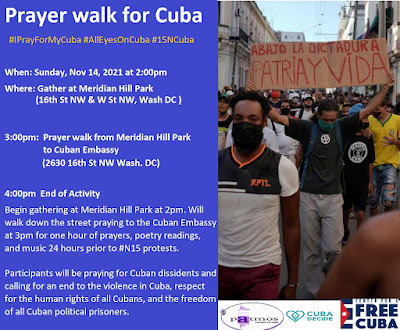 Participants will return on Monday, November 15th at Meridian Hill Park at 2:00pm and at 3:00pm, the same time the Civic March will be underway in Cuba, will set out on a Civic walk to the Cuban Embassy, and picket their from 3pm and 6pm while following events unfolding in the island. 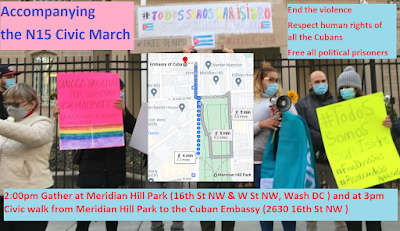 Today, we also join with the peoples of the many other nations that have, and continue to, suffer under the scourge of communism in prayers for the dead, and to carry on the liberation struggle for those still living under the yoke of communist oppression.

Finally, we give thanks to our Polish brethren who stopped the spread of communism in 1920 and sixty nine years later led the offensive that ended communism in Europe in 1989.