On November 2, 2021 the Chinese artist Ai Weiwei's memoir "1000 Years of Joys and Sorrows" came out.  Over the years this blog has followed his career as a dissident artist, and his solidarity with Cuban prisoners of conscience. Most recently he wrote the entry for Luis Manuel Otero Alcantara in Time Magazine. 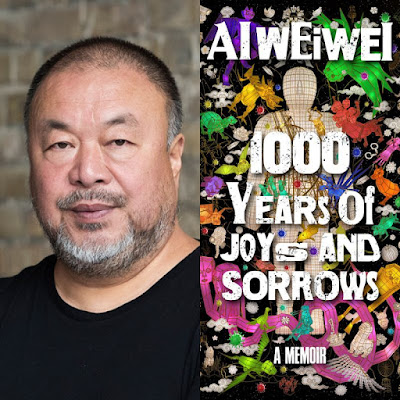 Penguin Books South Africa provided a video, along with the below transcript, of Ai Weiwei on why he wrote the book.

‘The idea for this book came to me during the eighty-one days I was held in secret detention by the Chinese government in 2011. During those long weeks, I thought often of my father, a poet who had been exiled during Mao Zedong’s Anti-Rightist Campaign. I realized how incomplete my understanding of him was and how much I regretted the unbridgeable gap between us. I did not want my son to suffer the same regret. I resolved that if I was released I would write down what I knew of my father and tell my son honestly who I am, what life is like, why freedom is so precious, and why autocracy fears art.’ - Ai Weiwei

Back in July 2021 Benedict  Rogers of Hong Kong Watch interviewed the Chinese artist, who asked him about the 100th anniversary of the founding of the Chinese Communist Party. They also discussed the situation in Hong Kong, Taiwan, his film about the 2019 protest movement, Cockroach (2020) and his  memoir, '1000 Years of Joys and Sorrows'.

Although China and Cuba are geographically very far from each other, both nations are suffering the scourge of Communism, and this joins both peoples in the struggle for freedom. Ai Wei Wei's memoir is required reading.