“We are prepared to fight them and answer in kind. U.S. leaders should think that if they are aiding terrorist plans to eliminate Cuban leaders, they themselves will not be safe.”  - Fidel Castro, September 6, 1963

58 years ago on November 22, 1963 John F. Kennedy was assassinated. At 12:30pm Central Standard Time the Kennedys in their convertible limousine turned off Main Street at Dealey Plaza in Dallas, Texas. As they were passing the Texas School Book Depository, President John F. Kennedy was shot twice and slumped over toward First Lady Jackie Kennedy. The governor of Texas was also hit. At 1:00pm President Kennedy was pronounced dead.

On the 58th anniversary of this political assassination the spin doctors and agents of influence continue to cloud the circumstances leading up to the murder of America's 35th president. However, the question that needs to be asked looking back to that fateful day: who benefited most from his death? Cui bono?

Following the Bay of Pigs debacle in April of 1961 the Kennedy brothers initiated Operation Mongoose. President Kennedy's brother and Attorney General of the United States, Robert Kennedy, headed up the sustained effort to topple the Castro regime and this included the assassination of Fidel Castro. 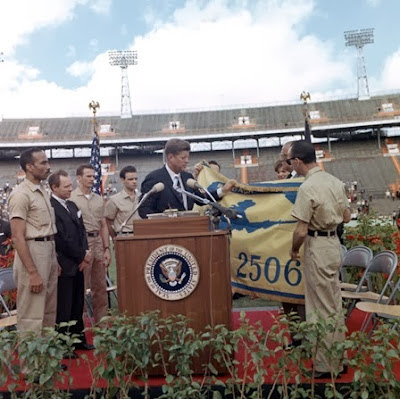 President John F. Kennedy and First Lady Jacqueline Kennedy addressed Brigade 2506 at the Orange Bowl in Miami on December 29, 1962 where he was given a flag of the Brigade and President Kennedy pledged that their flag would be returned to them in a free Havana.

(f) Support of Autonomous Anti-Castro Groups. The question was asked from where would the autonomous groups operate. Mr. Fitzgerald replied that they would operate from outside U.S. territory. He mentioned two bases of the Artime group, one in Costa Rica and the other in Nicaragua. Also it was hoped that the autonomous group under Manolo Ray would soon get itself established in a working base, possibly Costa Rica. Mr. Fitzgerald said that much could be accomplished by these autonomous groups once they become operational. A question was asked as to what decisions remain to be made. Mr. Fitzgerald replied that we were looking for a reaffirmation of the program as presented, including sabotage and harassment. When asked what was planned in sabotage for the immediate future, he said that destruction operations should be carried out against a large oil refinery and storage facilities, a large electric plant, sugar refineries, railroad bridges, harbor facilities, and underwater demolition of docks and ships. The question was also raised as to whether an air strike would be effective on some of these principal targets. The consensus was that CIA should proceed with its planning for this type of activity looking toward January.

Following the President's assassination within a year these operations were mothballed and Fidel Castro would remain in power until 2006, then replaced by his brother Raul in a dynastic succession following a health crisis. General Raul Castro remains the maximum authority in Cuba today as head of the Cuban Communist Party.

German journalist and documentary filmmaker Wilfried Huismann described the circumstances surrounding the assassination of John F. Kennedy and the subsequent cover up by the Johnson White House with the tacit approval of Robert Kennedy in his 2006 documentary Rendezvous with Death. At the time of the film's release Huismann gave an interview in Deutsche Welle on January 5, 2006 titled "Castro ordered Kennedy's Assassination." Below is an excerpt:

CIA documents, released in October of 2017, speculate that Oswald's motive for killing Kennedy was that he was "enraged after reading a detailed article in his hometown newspaper in New Orleans in September suggesting that his hero Castro had been targeted for assassination by the Kennedy administration." Oswald sought vengeance on Castro's behalf.  This was an embarrassment for the CIA and the White House that had repeatedly tried to assassinate Castro, and that President Kennedy's murder was blow back.
Another declassified CIA document, released in October 17, 2017 cites Assistant Secretary of State for Inter-American Affairs and later U.S. Ambassador to Mexico, Thomas C. Mann who said "he had a 'feeling in his guts' that Castro paid Lee Harvey Oswald to assassinate the 35th president on November 22, 1963, in Dallas, Texas."

Pedro Roig, of the Cuban Studies Institute has outlined the information available on Lee Harvey Oswald and his links to the Castro regime from documented sources. 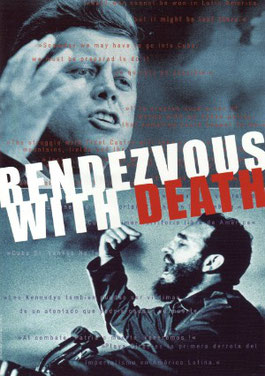 Cui bono?  Operation Mongoose operations were phased out after the assassination of President Kennedy and the departure of Robert Kennedy from his position as Attorney General in September of 1964. Regime change operations in Cuba came to an end and the Castro regime would remain in power to the present day.

Below is the 2006 German documentary Rendezvous with Death by Wilfried Huismann.

Brian Latell, PhD, author of Castro's Secrets: The CIA and Cuba's Intelligence Machine, gave a presentation to the Association of Former Intelligence Officers at their June 1, 2012 luncheon in McLean, Virginia in which he addressed the information known then on the Castro regime and the Kennedy Assassination.

On September 15, 2015 the international media reported on a newly declassified memo from the CIA concerning presidential assassin Lee Harvey Oswald that reported the following:


Three days after the shooting in Dallas, Texas, on 22 November 1963, Lyndon B Johnson was informed that Oswald had visited the Cuban and former Soviet Union embassies in Mexico City on 28 September 1963 to arrange visas.

The Daily Mail reported that the memo had "remained a secret until January 21, 2016, when the CIA released 19,000 confidential documents from the 1960s."