Join the campaign for Christmas without political prisoners in Cuba

A group of intellectuals, artists, former diplomats, religious leaders, and human rights defenders from around the world made an appeal during this holiday season that Catholic bishops "issue statements backing their Cuban counterparts' call for the release of Cubans jailed for the events of July 2021 and before, and a rejection of violence by the regime," and that they "include the freedom of Cuba's political prisoners, justice for the victims of repression, and national reconciliation for Cuba in prayers said at Mass, during this Christmas."

There are hundreds of Cuban political prisoners, and over 90 have been subjected to political show trials over the past ten days. Ambassador Brian A. Nichols, Assistant Secretary for Western Hemisphere Affairs on December 23rd tweeted that 90 + July 11th protesters across Cuba are being subjected to unjust legal proceedings and prison sentences of up to 25 years under atrocious prison conditions to terrorize Cubans and silence and intimidate peaceful demonstrators.

They are still ongoing, and those jailed are enduring terrible circumstances.

Since Dec 13, the Cuban regime tried 90+#11Jprotestors across#Cuba. The world sees the magnitude of these injustices: sentences of up to 25 years, fraudulent charges to silence, & atrocious prison conditions for peaceful demonstrators. pic.twitter.com/RIPIQQns5U

Now is the time to demonstrate our solidarity with those unjustly imprisoned for their political convictions. The late Vaclav Havel in an interview with Amnesty International in 2011 understood the need for people of good will to take action: "It's up to all of us to try, and those that say that individuals are not capable of changing anything are only looking for excuses."

Solidarity has been described as an act of resistance, but it is also an act of hope. Let us take action together and demand a general amnesty for all political prisoners, and in light of the present crises in Cuba let us pay special attention to what is going on in this island nation.

Please share information on ongoing political show trials, and messages from family members calling for their loved ones freedom.

The human rights organization CubaLex is asking that this artwork for Christmas be shared over social media with the hashtag in Spanish of #NavidadSinPresosPoliticos which translates into English as #ChristmasWithoutPoliticalPrisoners. 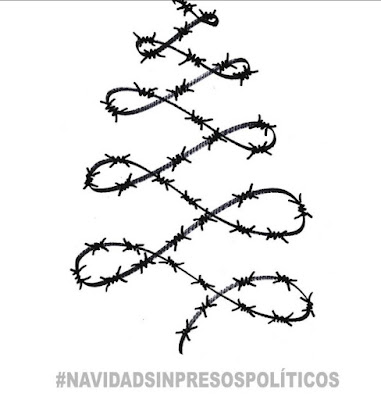 This is a time of unity, solidarity and generosity. Please share the following hashtags along with this campaign for a general amnesty for political prisoners and specific and documented information on the political captives of this regime.

1. Please  ask your pastor, rabbi, or priest to pray for the freedom of political prisoners during their religious services during this holiday season.

2. Please write letters to religious leaders in your community to request that the governments of Cuba, Venezuela and Nicaragua free their political prisoners.

3. Please use the following hashtags to spread this message.