Year of pandemic and protest 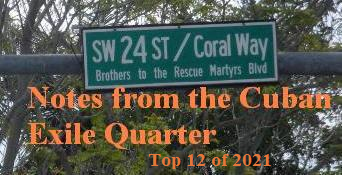 These are the top 12 monthly blog entries of the year arranged in chronological order. George Santayana understood the importance of remembering the past in order to avoid repeating the same mistakes.

José Julián Martí Pérez at 168: The heirs of José Martí and those who repress them now

"I think they kill my child every time they deprive a person of their right to think." - José Martí

On 27J, the eve of the 168th anniversary of the birth of José Julián Martí Pérez, better known as José Martí, approximately 20 artists, journalists and intellectuals gathered to read some of his works. [...]  Preemptive arrests, an act of repudiation against gathered artists and intellectuals, the Minister of Culture Alpidio Alonso and his Vice-Minister Fernando León Jacomino, caught on camera physically assaulting nonviolent demonstrators, and the dissidents arrested and crammed into a small bus by secret police and beaten up while already detained, reported Diario de Cuba.  [ Full blog entry] 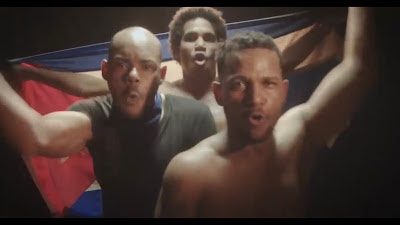 Artists from the San Isidro Movement celebrating Cuban culture
"Totalitarianism demands, in fact, the continuous alteration of the past, and in the long run probably demands a disbelief in the very existence of objective truth," observed George Orwell in his essay, "The Prevention of Literature" in the journal Polemic, published in January 1946. Writers that refuse to go along with alteration of the past all too often pay a terrible price. This is also true for artists in other fields because totalitarians seek to control the culture. [ Full blog entry ]

Setting the record straight on Cuito Cuanavale, General Arnaldo Ochoa, and how South African democrats overcame and defeated Apartheid in 1991

Revisiting the nonviolent victory over Apartheid, Castro's genocidal crimes in Africa, and the show trial of the Cuban general that spent months battling the South African Defence forces.

Communists reject nonviolence as a means to achieve lasting change, because civil disobedience to them is incompatible with Karl Marx's theory of class struggle. This is why they demonize and misrepresent Mohandas Gandhi, downplay the real events that brought an end to Apartheid in South Africa, highlight a dubious military victory in 1988 involving Cuban troops and falsely celebrate it as the agent of change. [ Full blog entry ]

The Radical Left's Contempt for Martin Luther King Jr. in his final years

"But first He must suffer many things and be rejected by this generation." - Luke 17:25

Today is Easter Sunday, but it is also the 53rd observance of the assassination of Reverend Martin Luther King Jr. On Good Friday, I quoted Reverend James Lawson, who like King is an apostle of nonviolence and a Christian pastor, said that “if you want to understand King, you must look at Jesus.” Dr. Martin Luther King Jr., like Jesus, was rejected by all.  He was rejected by conservatives, by liberals, by radicals, and by communists.  [ Full blog entry ]

Cuban Dissident Luis Manuel Otero Alcántara on Day 8 of a hunger and thirst strike: Some context informed by past actions and nonviolence theory

"I think they kill my child every time they deprive a person of their right to think." - José Martí

Luis Manuel Otero Alcántara is on the eighth day of a hunger and thirst strike, and in increasingly poor health. He is engaged in a profound dialogue with a regime that for decades has refused to listen, to really listen, to Cuban citizens petitioning for and demanding change. This dialogue has been going on for at least three years. He has tried all types of protests, petitions, performance art pieces, and music videos in defense of freedom of expression, especially artistic expression. [ Full blog entry ]

Ernesto "Che" Guevara born on this day in 1928. Nothing to celebrate.

A mass murdering racist, who dined with Mao as millions died of hunger is not someone to celebrate.

Some wish to celebrate Ernesto Guevara's birthday today. If he and his comrades had their way the world would have been subjected to a nuclear holocaust in October 1962, and they were bitterly disappointed that it did not happen.

Thankfully, John F. Kennedy and Nikita Khrushchev reached a peaceful outcome to the Cuban Missile Crisis, but the Castro regime protested it and was unhappy with their Soviet allies not launching their nuclear missiles. [ Full blog entry ]

#11July: One week later and nonviolent resistance continues in Cuba

For freedom and justice.

One week later and the protests continue, despite the most brutal efforts of the Castro regime to silence Cubans on the island. It began on July 11, 2021 in San Antonio de los Baños, just South East of Havana when Cubans took to the streets in protest. Others saw it streaming live, and also took to the street in cities and towns across the country chanting "Freedom" and "Down with the dictatorship."

President Miguel Diaz-Canel appeared on official television threatening: "They [protesters] would have to pass over our dead bodies if they want to confront the revolution, and we are willing to resort to anything."  [ Full blog entry ]

Cuban Freedom March Miami today August 22nd from 10am to 1pm: A reflection on its significance 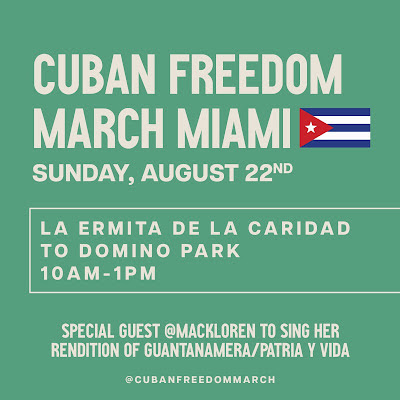 The Cuban Freedom March arrives in Miami, Florida today on August 22, 2021 with a march from la Ermita de la Caridad to Domino Park. The protest starts at 10:00am. Organizers have carried out successful marches in Washington DC, and Los Angeles.

On August 11, 2021 the leader of this movement, Alian Collazo, moderated a conversation on "what's really happening in Cuba" that is necessary viewing to listen to different perspectives, from young Cuban and Cuban American voices both inside and outside of Cuba.

This is a freedom movement led by young Cubans and Cuban Americans with a presence on social media on Instagram, Facebook, and Twitter. [ Full blog entry ] 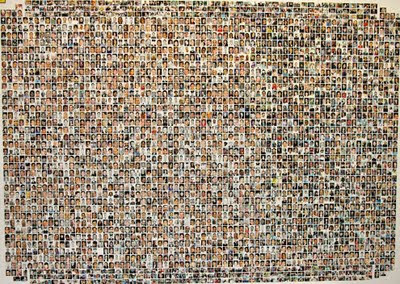 2,977 men, women and children were murdered on September 11, 2001 over the course of a few hours on a sunny Tuesday morning in three different states. The victims were distributed as follows: 246 on the four planes converted into flying missiles. Two of the planes flew into the Twin Towers which collapsed and led to the deaths of 2,606 human beings in New York City in the towers and on the ground, and a third struck the Pentagon taking 125 lives. The fourth plane, heading to Washington D.C., never arrived and crashed into an open field near Shanksville, Pennsylvania as the passengers of the flight fought the terrorists over control of the flight.  [ Full blog entry ]

"Use truth as your anvil, nonviolence as your hammer, and anything that does not stand the test when it is brought to the anvil of truth and hammered with nonviolence, reject it." - Mohandas Gandhi

Today in Cuba there are thousands of Cubans jailed for their nonviolent demand for an end to the Castro dictatorship expressed during the mid July 2021 protests. Hundreds have been identified that were jailed or disappeared. It is known that some have resorted to going on hunger strike to protest their unjust imprisonment. Luis Manuel Otero Alcántara is on a hunger strike that he began on September 27, 2021 and is still weak from a bout of COVID-19, and prior hunger strikes. This is part of the movement's repertoire of nonviolent tactics to resist the Castro regime. [ Full blog entry ]

Testimony by John Suarez at the Transatlantic Parliamentary Forum on November 20, 2021

Transatlantic Parliamentary Forum testimony: November 20, 2021
July 11, 2021 national nonviolent protests in Cuba marked a before and after in the history of the island. Tens of thousands of Cubans across the island demanded an end to the dictatorship, rejected the official slogan Patria o Muerte (Homeland or Death) and chanted Patria y Vida (Homeland and Life). The reaction of the dictatorship was swift and brutal. Boinas Negras (black berets) formally known as the National Special Brigade of the Ministry of the Interior, fired on unarmed protesters, and were captured on video. The dictatorship handed out clubs to regime agents to attack protesters. Thousands were detained, and hundreds remain jailed and face summary trials with prison sentences in excess of 25 years. [ Full blog entry ]

"My duties to country and to my own political convictions are above all human effort; with these I shall reach the pedestal of freedom or I shall perish fighting for my country's redemption." -  Antonio Maceo, November 3, 1890 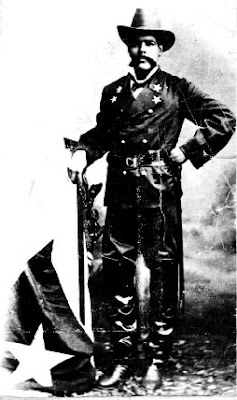 Today, also marks the day 31 years ago on December 7, 1990 Cuban novelist Reinaldo Arenas killed himself in New York City, after battling AIDS for several years. He was an important critic of the Castro regime, and those intellectuals who supported it. As a Gay man he also suffered discrimination because of the communist dictatorship's hostility to homosexuals. [ Full blog entry ]