The Brothers to the Rescue shootdown 26 years later: Continuing the struggle for truth, justice, and memory

Mario de la Peña, age 24; Carlos Costa, Pablo Morales, both 30, and Armando Alejandre Jr., 45 were murdered in international airspace on February 24, 1996 at 3:21pm and 3:27pm by heat-seeking air-to-air missiles launched from a MiG-29 UB piloted by Lorenzo Alberto Peréz Peréz that destroyed the two planes the men were onboard. Mario, Carlos, Pablo and Armando were members of the humanitarian organization Brothers to the Rescue.

This was a premeditated act of state terrorism carried out by Mr. Peréz Peréz on the orders of both Fidel and Raul Castro and through the chain of command issuing the unlawful order that killed these four men.

Cuban spies obtained the information on flight times, and were told not to fly on February 24th, and if they did have to fly to signal the MiGs with a motion while in flight to avoid the fate of the others.

This was a premeditated killing over international airspace. The International Civil Aviation Organization (ICAO) concluded that the two planes "were shot down miles away from Cuba’s boundary having never entered or touched it on that day and the planes had been in contact with the Cuban tower throughout the flight."

They failed to destroy a third plane with Sylvia Iriondo, Andrés Iriondo, Jose Basulto, and Arnaldo Iglesias on board.

There is no statue of limitations on murder and state terrorism.  There is much more in the Inter-American Commission on Human Rights reports on the Brothers to the Rescue shoot down, and worth reading.

Over the past 26 years friends, and family have continued to demand truth, respect memory and demand justice through protests, petitions, and law suits.

Later today they will be hosting a silent vigil at Florida International University at 3:15pm in remembrance of their loved ones. 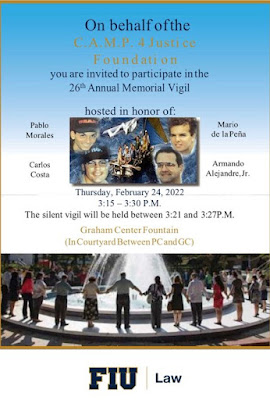