Berlin 1936 and Beijing 2022: Legitimizing genocidal totalitarian regimes through sports is a profound immorality with bad outcomes

"Those who cannot remember the past are condemned to repeat it."- George Santayana

The 2008 Summer Olympic Games in Beijing were a human rights disaster for China with scenes of Tibetan demonstrators gunned down by Chinese soldiers.

14 years later, and the world has suffered over 5.6 million deaths due to COVID-19, and the Chinese Communist dictatorship of  Xi Jinping bears responsibility. The Chinese government did not reveal for weeks what it knew about COVID-19, allowing it to spread into a worldwide pandemic. The Frontline Documentary "China's COVID Secrets" is required viewing to understand what happened.

#NoBeijing2022 has listed some of the other outrages committed by the ruling Chinese Communist Party in Beijing.  "The Beijing 2022 Winter Olympics is set to happen amid one of the world’s worst crackdowns against freedom, democracy, and human rights."

Despite this the International Olympic Committee (IOC) chose China once again to host the Olympics in 2022 in the midst of the historic crimes of the Chinese Communist Party dictatorship.

As was the case in the lead up to the 2008 Olympics friends of a free China need to increase scrutiny on the Chinese regime and boycott these Olympics. The consequences of  the IOC legitimizing such a regime cannot be overstated. If you are in the Washington DC area on Thursday, February 3rd at 12 noon please join the #NoBeijing2022 Rally at Union Square 3rd Street SW. 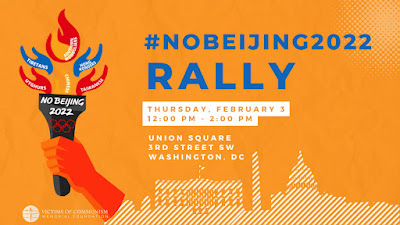 The 1936 Olympics held in Berlin and hosted by the Nazi Third Reich with the ceremonies formally opened by Adolph Hitler should serve as a cautionary example. The United States Holocaust Memorial Museum described the impact of the games as follows:


On August 1, 1936, Hitler opened the XIth Olympiad. Musical fanfares directed by the famous composer Richard Strauss announced the dictator's arrival to the largely German crowd. Hundreds of athletes in opening day regalia marched into the stadium, team by team in alphabetical order. Inaugurating a new Olympic ritual, a lone runner arrived bearing a torch carried by relay from the site of the ancient Games in Olympia, Greece.
[...] Concerted propaganda efforts continued well after the Olympics with the international release in 1938 of "Olympia," the controversial documentary directed by German film maker and Nazi sympathizer Leni Riefenstahl. She was commissioned by the Nazi regime to produce this film about the 1936 Summer Games. Germany emerged victorious from the XIth Olympiad. German athletes captured the most medals, and German hospitality and organization won the praises of visitors. Most newspaper accounts echoed the New York Times report that the Games put Germans "back in the fold of nations," and even made them "more human again." Some even found reason to hope that this peaceable interlude would endure. 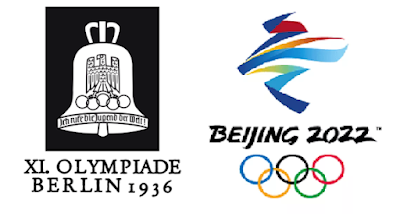 In 2022,  returning the Olympics to China and making this decision in the midst of the COVID-19 pandemic, the destruction of Hong Kong's democracy, threats against Taiwan, and the Uyghur genocide creates a historic moral hazard.

This is why I will not watch the Olympics, and encourage others to join me in this boycott, instead I will stand with Hong Kong, and Taiwan, share documentaries and films that reveal the facts of the genocidal regime in Beijing, and calls to nonviolent protests against the Chinese Communist dictatorship, and their enablers.

Below is a documentary about the 2019-2020 protests in Hong Kong titled "Do Not Split." Please share it with others.