"Long live human rights, with my blood I wrote to you so that this be saved as evidence of the savagery we are subjected to that are victims of the Pedro Luis Boitel political prisoners [movement]" - Orlando Zapata Tamayo, letter smuggled out April of 2004*

Fyodor Dostoevsky wrote in his 1861 book, The House of the Dead  that "the degree of civilization in a society can be judged by entering its prisons." What does this say about the Cuban government that has barred the International Committee of the Red Cross from visiting Cuba's prisons for decades?

Many Cubans have died over the past 63 years suffering cruel treatment at the hands of communist prison officials in the Castro dictatorship.

Tomorrow marks the death of one more. His name was Orlando Zapata Tamayo.

Orlando Zapata Tamayo was a human rights defender who was unjustly imprisoned in the Spring of 2003 and was tortured by Cuban prison officials and state security agents over the next six years and ten months. He died on February 23, 2010 following a prolonged hunger strike, aggravated by prison guards refusing him water in an effort to break his spirit. He is a victim of Cuban communism.

Cuban opposition leader Oswaldo Payá Sardiñas, who was killed under suspicious circumstances on July 22, 2012, issued a statement the same day that Orlando died and appeared in a photograph holding up a photocopy of the martyred human rights defender name and image.


"Orlando Zapata Tamayo, died this afternoon, February 23, 2010, after suffering many indignities, racist slights, beatings and abuse by prison guards and State Security. Zapata was killed slowly over many days and many months in every prison in which he was confined. Zapata was imprisoned for denouncing human rights violations and for daring to speak openly of the Varela Project in Havana's Central Park. He was not a terrorist, or conspirator, or used violence. Initially he was sentenced to three years in prison, but after successive provocations and maneuvers staged by his executioners, he was sentenced to more than thirty years in prison."

Orlando Zapata Tamayo was born in Santiago, Cuba on May 15, 1967. He was by vocation a brick layer and also a human rights activist, a member of the Movimiento Alternativa Republicana, Alternative Republican Movement, and of the Consejo Nacional de Resistencia Cívica, National Civic Resistance Committee. Orlando gathered signatures for the Varela Project, a citizen initiative to amend the Cuban constitution using legal means with the aim of bringing Cuba in line with international human rights standards.
Amnesty International had documented how Orlando had been arrested several times in the past. For example he was temporarily detained on 3 July 2002 and 28 October 2002. In November of 2002 after taking part in a workshop on human rights in the central Havana park, José Martí, he and eight other government opponents were arrested and later released. He was also arrested on December 6, 2002 along with fellow prisoners of conscience Oscar Elías Biscet and Raúl Arencibia Fajardo.

Dr. Biscet just released from prison a month earlier had sought to form a grassroots project for the promotion of human rights generally and the Universal Declaration of Human Rights more specifically, called "Friends of Human Rights." State security prevented them from entering the home of Raúl Arencibia Fajardo, Oscar Biscet, Orlando Zapata Tamayo,Virgilio Marante Güelmes and 12 others held a sit-in in the street in protest and chanted "long live human rights" and "freedom for political prisoners." They were then arrested and taken to the Tenth Unit of the National Revolutionary Police, Décima Unidad de La Policía Nacional Revolucionaria (PNR)

Orlando Zapata Tamayo was released three months later on March 8, 2003, but Oscar Elias Biscet, Virgilio Marante Güelmes, and Raúl Arencibia Fajardo remained imprisoned. On the morning of March 20, 2003 whilst taking part in a fast at the Fundación Jesús Yánez Pelletier, Jesús Yánez Pelletier Foundation, in Havana, to demand the release of Oscar Biscet and the other political prisoners. Orlando was taken to the Villa Marista State Security Headquarters.

He was moved around different prisons, including Quivicán Prison, Guanajay Prison, and Combinado del Este Prison in Havana. According to Amnesty International on October 20, 2003 Orlando was dragged along the floor of Combinado del Este Prison by prison officials after requesting medical attention, leaving his back full of lacerations. Orlando managed to smuggle a letter out following another brutal beating that was published in April of 2004:


"My dear brothers in the internal opposition in Cuba. I have many things to say to you, but I did not want to do it with paper and ink, because I hope to go to you one day when our country is free without the Castro dictatorship. Long live human rights, with my blood I wrote to you so that this be saved as evidence of the savagery we are subjected to that are victims of the Pedro Luis Boitel political prisoners [movement]."*

Protests for Orlando Zapata Tamayo continue
Twelve years have passed but the martyred Cuban human rights defender is not forgotten. From the beginning the regime sought to put down and silence protests and acts of remembrance for him, but failed.

In March of 2010 at the second Geneva Summit for Human Rights former prisoner of conscience Jose Gabriel Ramon Castillo testified to what had happened to Orlando Zapata.

In Norway, regime agents became violent and created international controversy after a Cuban diplomat bit a young Norwegian-Cuban woman for trying to record her mom engaged in a protest remembering Orlando Zapata Tamayo in front of the Cuban Embassy in Oslo in May of 2010.

On September 30, 2010 the Canadian punk rock band I.H.A.D. released a song linking what happened to Orlando Zapata Tamayo to the indifference of Canadian tourists visiting Cuba asking the question: Where were you the day Orlando Zapata died? On May 10, 2012 the Free Cuba Foundation published a video accompanying the song, after receiving the band's permission, with images and song lyrics.

On February 23, 2016 at the 8th edition of the Geneva Summit for Human Rights and Democracy Rosa María Payá gave the last presentation in which she remembered and honored the memory of Orlando Zapata Tamayo on the sixth anniversary of his passing.

Four days prior to marking eight years to the day that Orlando Zapata died, activists inside Cuba took to protest in the streets with banners remembering the  martyred human rights activist. The Castro regime continues to do all it can to eliminate the memory of this humble and good man, but the dictatorship has failed.

On May 21, 2021 Cuban feminist Ileana Fuentes in an essay published in Cubanet titled "Let it be known: Black Lives Do Not Matter in Cuba" brought together the cases of Orlando Zapata Tamayo and Luis Manuel Otero Alcántara.

Tomorrow, we will once again honor and remember the brick layer and human rights defender by writing about him, organizing a vigil and protest outside the Cuban Embassy in Washington DC, and continuing his work for human rights in Cuba, and signing petitions demanding the freedom of hundreds of Cuban political prisoners today inside the Castro regime's prisons, and that the International Committee of the Red Cross be granted access to all the jails in Cuba.

Following his example, and Article 13 of the Universal Declaration of Human Rights, we will also join in the demand to recognize and advocate for Anamely Ramos's right to return home to Cuba.

The legacy of Orlando Zapata Tamayo continues in the nonviolent resistance to injustice inside and outside of Cuba's prisons, and in mid-July 2021 the dictatorship was surprised to learn that there are tens of thousands continuing his legacy of defending human rights, and calling for an end to the dictatorship. 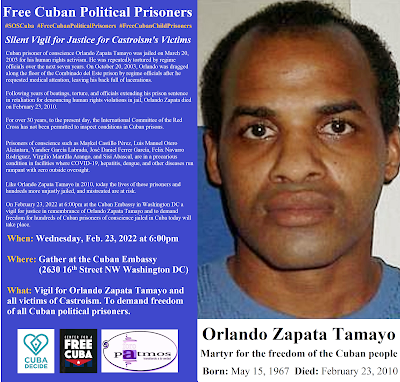