What needs to be done?

Cuban voices were declaring Cuba a failed state in the midst of a major fire at the Matanzas Supertanker Base that began on August 5, 2022 due to a lightening strike and over the next five days spread out of control engulfing four tanks at the storage facility before being controlled on August 9th.

In the midst of the unfolding disaster, the Cuban government continued with a focus on optics and propaganda, in some cases delaying help to confront the crisis. Stephen Gibbs, the Latin American correspondent for The Times tweeted on August 7th, “Mexican firefighters arrive in Cuba. Are the speeches really necessary? Isn’t this an emergency?” 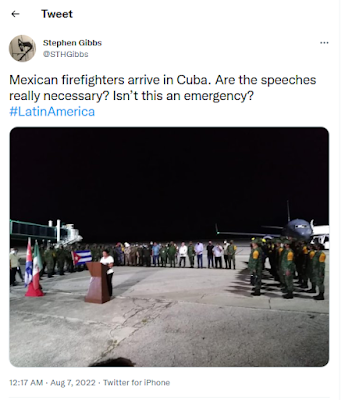 One of the posts that drew outrage among Cubans, was self-described entrepreneur and Fidel Castro’s grandson, Sandro Castro, posting video of himself driving to Matanzas with a caravan of “entrepreneurs” to “give support to the people.”

On August 9th, Local 10’s Hatzel Vela pressed Cuban government representatives, who were criticizing the United States for not offering concrete assistance, to outline what Havana had requested. Only to learn that they had not made a formal request to Washington.

The charge that Cuba is a failed state is not only due to the raging fire in Matanzas, possibly caused by a failure to maintain the lightning rod at the facility and poor response with inexperienced personnel, but also two other recent incidents that called attention to systemic regime failures.

Cuban government officials decided early on in the COVID-19 pandemic that they wanted to be “be the first country in the world to vaccinate their whole population with their own vaccines,” and were willing to let Cubans die while they developed their domestic vaccines instead of importing them, including from their allies Russia and China in order to advance their “healthcare superpower” narrative. 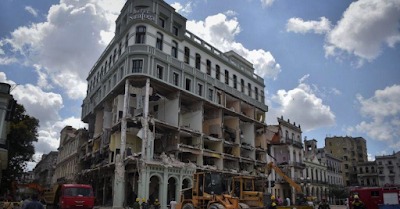 The Hotel Saratoga opened in 1890, and like much of the rest of commercial property in Cuba was seized by the Castro regime, and taken over by the military. On May 6, 2022 the historic hotel exploded and over 40 Cubans were killed in what officials said was caused by a gas leak, It was managed by the military-owned Gaviota tourism company.

The absence of critical voices, and scrutiny does not help. Dissidents who speak out are jailed, or forcibly exiled. Journalists and authors that provide accurate reporting are barred from the island.

A clue to why Anthony DePalma was recently denied entry into Cuba can be found in Tim Stanley’s August 7, 2022 review in The Telegraph, “Why don't we treat Cuba like a regular dictatorship?” of Elizabeth Dore's How Things Fall Apart, in which he references Anthony DePalma’s The Cubans: Ordinary Lives in Extraordinary Times (2020). “Part of Cuba’s tragedy, DePalma argues, is the character of its people: they think they’re the best, even when their country is at its worst, hence they rarely demand the change they deserve. ‘There must be a measure of vanity in a people willing to overlook the fact that it is almost impossible to get ibuprofen or lice shampoo in a Cuban pharmacy whilst boasting Cuba is a global medical power.’”

On July 15, 2021 President Joe Biden gave the following description of Cuba that some disputed at the time.

"Cuba is unfortunately a failed state and repressing their citizens. There are a number of things that we would consider doing to help the people of Cuba, but it would require a different circumstance or a guarantee that they would not be taken advantage of by the government. For example, the ability to send remittances back to Cuba. We would not do that now because the fact is it's highly likely the regime would confiscate those remittances or big chunks of it."

The past year has demonstrated that the assessment made by President Biden was (and remains) accurate.

What is to be done?

Recognize that the current regime in Cuba is an obstacle to the well being of Cubans.

The Cuban dictatorship has erected an internal blockade that prevents Cubans from producing food, and selling goods and services to each other. It has also blocked the Cuban diaspora from engaging in humanitarian efforts to directly provide assistance to Cubans in need. Significant percentages of monies sent in to Cuba are absorbed by military entities, and do not benefit everyday Cubans.

There is a petition underway urging that world democracies call on the UN Security Council to respond to the situation by sending a delegation to Cuba, and by establishing a humanitarian corridor for direct emergency assistance to needy Cubans, without regime participation.