Eighty three years ago on August 23, 1939 the world learned that Communist Russia and Nazi Germany had signed a non-aggression pact, the Molotov-Ribbentrop pact. It was named after their respective foreign ministers, Vyacheslav Molotov and Joachim von Ribbentrop.

August 23 marks the European Day of Remembrance for the Victims of Stalinism and Nazism, established on the Ribbentrop-Molotov Pact anniversary.

On #BlackRibbonDay, we honor those who perished under the Soviet and Nazi terror. It’s our obligation so the memory of them preserves. pic.twitter.com/Q3RAQIIY7a

Observers would have been even more horrified had they known of the secret protocols that divided Eastern Europe between the two totalitarian regimes. What they called a "peace treaty" in reality was a war treaty.

Sixteen days later the Soviet Union exercising its secret agreement with the Nazis invaded Poland from the East and met their German allies in the middle of Poland.

On September 22, 1939 the German Nazi army joined with the Soviet Communist army in a military parade in Brest-Litovsk and the two sides celebrated together. 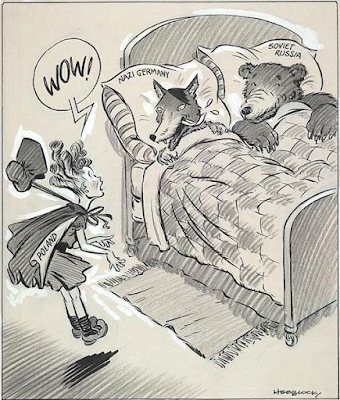 Soviet Foreign Minister Vyacheslav Molotov in a October 31, 1939  speech spoke candidly about the Nazi-Communist alliance, and ridiculed its victims.

"The ruling circles of Poland boasted quite a lot about the ‘stability’ of their state and the ‘might’ of their army. However, one swift blow to Poland, first by the German Army and then by the Red Army, and nothing was left of this ugly offspring of the Versailles Treaty which had existed by oppressing non-Polish nationalities."

Approximately 230,000 Polish soldiers and officers and thousands of military service representatives were taken captive by the Russians. The Soviet precursor to the KGB was the NKVD. "From October 1939, the delegated NKVD officials from Moscow heard the prisoners, encouraged them to cooperate and collected data. Only a few of the prisoners agreed to collaborate. The commanding officers’ reports included opinions about hostile attitudes of the Poles and a minimal chance of them being useful to the USSR authorities." 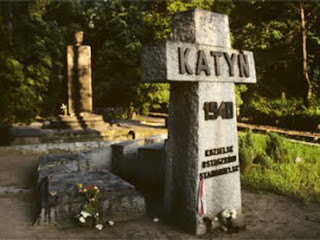 Thousands of Polish Army officers and intellectual leaders were taken into the Katyn Forest near Smolensk in the Soviet Union, shot in the back of the head or in the neck and buried in mass graves.

Secret protocols of the Hitler-Stalin Pact not only partitioned Poland but also divided up Lithuania, Latvia, Estonia, Finland and Romania into Nazi and Soviet "spheres of influence." The Soviet Union invaded and annexed the Baltic States in June 1940.

Soviet Foreign Minister Vyacheslav Molotov in a speech delivered on August 1, 1940 while the Soviet Union was then still allied with Nazi Germany continued to describe their military alliance as a "non-aggression pact."

Another sign of Nazi-Soviet cooperation was the Soviet Union’s deportation of hundreds of refugees to Nazi authorities. Most of them were German anti-fascists, communists, and Jews who had sought asylum in the Soviet Union.

This alliance ended on June 22, 1941 when Adolf Hitler launched Operation Barbarossa, the invasion of the Soviet Union, betraying his ally Josef Stalin.

"Stalin was shocked; he had received a plethora of warnings of an imminent invasion – notably from Winston Churchill, informed by British intelligence briefings. The communist dictator had refused to believe them," reported Agence France Press. Stalin preferred to rely on Hitler's assurances.

Today, communist apologists will continue to defend Stalin and attempt to cover up this history of collaboration between the Soviet Union and Nazi Germany. It may also explain the real reason behind attacks on the legacy of Winston Churchill. His observation on the relationship between the Communists and the Nazis in his book The Second World War, Volume 1, The Gathering Storm (1948) is damning and accurate.

"Fascism was the shadow or ugly child of communism… As Fascism sprang from Communism, so Nazism developed from Fascism. Thus were set on foot those kindred movements which were destined soon to plunge the world into more hideous strife, which none can say has ended with their destruction."

The Molotov-Ribbentrop Pact and the reckless strategy pursued by Stalin and the Communist International cost 22 to 28 million Russian lives alone in World War Two, and nearly led to the Nazi conquest and occupation of the Soviet Union.