#5A Maleconazo at 28: When secret police shot into crowds of non-violent Cuban protesters with live ammunition

28 years ago on August 5, 1994, a thousand Cubans marched through the streets of Havana chanting "Freedom!"and "Down With Castro!" They were met with brutal repression, including regime agents dressed in plain clothes shooting live rounds at unarmed demonstrators.

Last year on July 11, 2021 it happened again, but this time it was not just in Havana, but across the island with tens of thousands of Cubans participating in over 50 cities and towns. The response of the dictatorship was the same as 1994, but this time the images reached the world almost immediately.

In 2013 photographs taken during the 1994 protests by Karel Poort, a Dutch visitor, were made public and confirmed the anecdotal accounts of that day. Cuban dissident Regis Iglesias described how the dictatorship militarized the streets in an effort to terrorize the populace:


A convoy of trucks crammed with repressive special troops and a vehicle with a 50 caliber machine gun on top patrolled up and down the long street.

Little has been reported on this, but some of the images and sounds remain. This combined with testimony of those who were there provide a better idea of what took place.

Five hundred of the Cubans had arrived at the Havana sea wall (El Malecon) to board a launch that was rumored was going to be taken to Miami.  These people were not seeking to overthrow the dictatorship but did want to live in freedom.

They were met by the Castro dictatorship's secret police who told the crowd to disperse.
Instead of diffusing the situation another 500 Cubans joined in and  they began to march along the Malecon chanting "Freedom!"and "Down With Castro! After marching for a kilometer, a hundred Special Brigade members and plain clothes police confronted the protesters firing live rounds into the crowd.
28 years later and the full details of what transpired remains mostly silenced despite the pictures of regime officials pointing their handguns at the demonstrators combined with reports of the sounds of gun shots and wounded protesters echoing down through the years in anecdotal stories about that day.
Eyewitness account

Ignacio Martínez Montero posted on la Voz del Morro a first hand account of what happened that day that is translated to English below:


Then came the year 94 One hot August of that year's day, I'd arrived at my mother in laws home in Cuba and Chacón in the heart of Old Havana, near the Malecón, for that reason alone, after visiting my mother in law, I sat , like many, on the wall of the bay, very close to where still today the famous Casablanca launch travels in and out. That year was turbulent, constantly talking about boats diverted to Miami, and the tugboat. Maybe that's why the special brigade trucks arrived and attacked all of us who were sitting.

Our response to this aggression was only to clamor for freedom. It has been said that we threw stones; but all that is a lie, the truth was that we were tired of so much aggression and without agreeing to we began to walk together screaming, Enough, Down with the revolution ... And before reaching Hotel Deauville, a battalion waited for us that attacked us with sticks and iron rods. It was they who made the big mess. They broke my left eyebrow and left me semi-lame. Yes, there were assaults and the aggressors had guns, but not among the civilians. One of the boys who went with us, who was called the Moor, even while handcuffed, they shot him in the torso and it was a miracle that he did not die. Who do you think paid for that? No one.

They put us in a truck where they received us with beatings only to convince us to scream "Viva Fidel." They took us to the police station located at L and Malecon. Hours later I was taken to Calixto García hospital. There they attended to my foot and I treated the eyebrow wound; the medical certificate, never appeared. From there we boarded another bus and were taken to the prison 15/80, I could say "kidnapped" because nobody knew where we were. Some kids and nephews of my dad, who were with us, were released immediately. A boy could not take it and ended up hanged. No one learned of this; but we are many the witnesses who know what really happened that August 5th 1994, the day of Maleconazo.

Twenty eight years later and the Castro regime continues in power terrorizing, beating, torturing and murdering nonviolent dissidents, and shooting young black men in the back, but some Progressive Americans want to apply Cuban style policing in the United States, and claim that there is a lot we can learn from them.
We invite all people of good will to remember some of the victims of the Cuban dictatorship.
Diubis Laurencio Tejeda was a 36-year-old singer who was shot in the back by the National Revolutionary Police (PNR) in Havana on July 12.
There are others, but they have not been officially recognized.
This is the case of Christian Díaz, age 24, disappeared after joining the 11J protests. Relatives on July 12 reported him missing to the PNR in Cárdenas. Police told his father that Christian was jailed in Matanzas. On Aug. 5, officials informed his family he’d drowned in the sea and was buried in a mass grave. His family is convinced he was beaten to death. 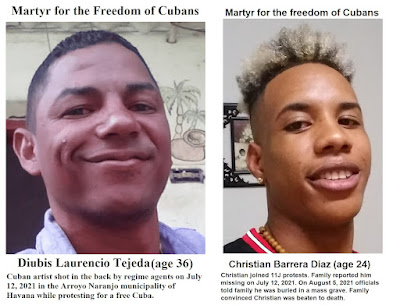 Hopefully, the events of July 11, 2021 and August 5, 1994 will wake up more to the true nature of the Castro dictatorship, and the need to be in solidarity with the Cuban people, not their oppressors.
Posted by John Suarez at 3:26 PM