Chinese regime gets its money's worth from the Castro regime. 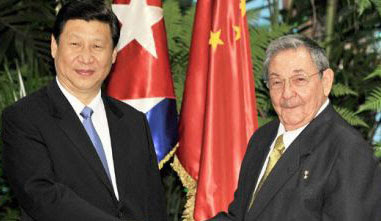 Yoani Sanchez twittered today that the Chinese vice-president Xi Jinping, will sign with Raul Castro new cooperation agreements, and begin his visit to Cuba today. The vice-president of the communist dictatorship of China Xi Jinping arrives today (June 4, 2011) on an official visit to Cuba which includes signing "cooperation agreements" i.e. providing financial aide to sustain the communist dictatorship in Cuba. This leads to an obvious question: What are the Chinese communists getting for their money?

In September 22, 2006 edition of Hemisphere Daniel Erickson and Adam Minson wrote about the relationship between China and Cuba offering two extremely interesting nuggets of information. Twenty two years ago it was the Cuban regime in Havana that expressed support for Beijing's brutal repression of protesters in Tiananmen Square with the Cuban foreign minister commending Chinese authorities for "defeating the counterrevolutionary acts." This arrangement goes beyond diplomacy and economics into the world of espionage where some analysts suspect that China is using its telecommunications involvement in Cuba as cover for espionage against the US. There is also speculation that Beijing took over the Lourdes spy base after Russia ended its lease in 2001 and is operating another base, Bejucal, near Santiago de Cuba. But the question is what has the Cuban regime done lately for their Chinese paymasters?

The answer at the United Nations Human Rights Council is plenty. The only member to recommend that China increase its repression on human rights defenders during its first universal periodic review in February of 2009 was the Cuban dictatorship. But that was 2009 and this is now. On March 15, 2011 a former Chinese political prisoner and participant in the 1989 Tiananmen Square protest, Yang Jianli, was addressing the United Nations Human Rights Council about the systematic human rights abuses in China and about Tiananmen Square and the June 4, 1989 Beijing Massacre when the representative of the Chinese regime tried to shut him down. At 2:48 in the video below provided by UNWATCH the representative of the Cuban dictatorship backs the efforts of the Chinese regime. Thankfully they both failed but the Castro regime was the only member of the Human Rights Council to back the Chinese.

Below is the full statement in English along with the interruptions by the various parties:

Thank you, Mr. President. My name is Yang Jianli. I am the president of Initiatives for China and a Harvard Fellow. In 1989, I was in Tiananmen Square, where I witnessed the massacre of thousands by the guns and tanks of the Chinese army. In 2002, I was arrested by the Chinese government for helping the peaceful labor movement. I served five years in prison.

I have come here today because this council is supposed to be the world’s protector of human rights. And so I ask this august body:

When the Nobel Peace Prize was awarded three months ago to Liu Xiaobo, a writer who is serving an 11-year jail sentence for having called for freedom—and the human rights situation in China rose to the top of the world headlines—why did you not speak out?

Why have you adopted no resolutions urging the Chinese government to respect the rights that are guaranteed under China’s constitution—the very rights it violated in imprisoning Liu Xiaobo?

Where were you when his wife, Liu Xia, cried out desperately for help a few weeks ago, because her life has become unbearable?

Where were you, when –

UNHRC President: Sorry. Sorry. We have a point of order by China — please.

China: Mr. President, China heard earlier the statement by this non-governmental organization, and this statement has nothing to do with the current agenda. According to the general procedures of our council, the president must take a decision to stop such a statement. And I also have a question about his status as a member of this organization, which is something that seriously undermines the credibility of this council. I hope that the council will check into his status.

President: Thank you. We take note of your concern. And I ask… — the United States.

USA: Thank you, Mr. President. We would like to highlight that we firmly believe that NGOs (non-governmental organizations) must be permitted to speak. Though member states including the US may occasionally disagree with the content of their statements, we are of the opinion that the intervention we are hearing was addressed to the subject matter at hand under (Agenda) Item 4. We would therefore ask that you rule that the speaker be allowed to end his presentation. Thank you, Mr. President.

President: Thank you. I take note of the concerns… — Cuba, please.

Cuba: Thank you, Mr President. I am sorry to be taking the floor at this time, but I would like to support the statement made by China, and also support the request that he put forward. Thank you.

Where were you, when police and hired thugs brutally beat Mr. Chen Guangcheng, a blind human rights defender, and have since surrounded his house, 24 hours a day, since his release from prison last September?

Mr. President, I ask this council: Do you hear the cries of the Tiananmen Mothers?

When will you address the recent, brutal crackdown on Chinese citizens, who peacefully gathered for walks around Chinese cities, after hearing about the uprisings in the Middle East? Many have been arrested or disappeared.

When will you demand accountability from the individuals responsible for the Tiananmen Square Massacre, and for other gross and systematic violations of human rights in China? When will these perpetrators be subjected to a travel ban, an asset freeze, and a reference to the International Criminal Court?

Mr. President, three weeks ago Colonel Qaddafi justified his bloody actions by pointing to what China did to “those people on Tiananmen Square.” Does this not show how ignoring crimes in one place only encourages them to spread elsewhere? And can the millions of Chinese victims ask why this council suspended Libya for killing its own people, yet allows the Chinese government to continue to sit here as a member?

It is for this reason that it is so important to take seriously who is a member of the UN Human Rights Council and that they not be gross and systematic human rights violators in order to save the Council from irrelevance. At the same time as the world remembers that 22 years ago the communist dictatorship in China ordered the troops of the "People's Liberation Army" to open fire on students and workers murdering thousands that on this date the vice-president of that regime is being received by Raul Castro and Machado Ventura. They are more than just their ideological comrades but part of a regime that does the hard work of defending the indefensible human rights record of the Chinese regime. Then again the Cuban regime has had a lot of practice defending its own horrible record.