"The seizure of power is a worldwide objective of the revolutionary forces." - Ernesto 'Che' Guevara 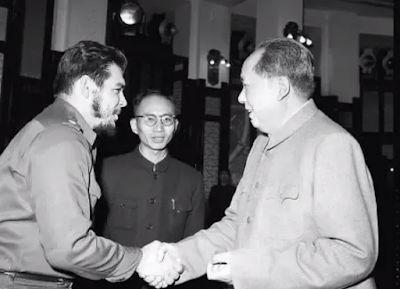 Mao Zedong had already been in power in China for a decade when the Castro regime took power in Cuba in 1959.  In September 1960 the Cuban government diplomatically recognized the Peoples Republic of China. Between 1960 and 1964 the two regimes would collaborate closely together.

Mao's regime in 1958 had embarked on the Great Leap Forward, a campaign to reorganize the Chinese populace to improve its agricultural and industrial production along communist ideological lines. The campaign was a disaster that led to mass famine and a death toll of at least 45 million.
Ernesto "Che" Guevara with a Cuban delegation visited Mainland China and met with Mao Zedong, Zhou Enlai, and other high ranking Chinese officials in 1960 to discuss conditions in Cuba and in Latin America, and the prospects for communist revolution in the Western Hemisphere. The following excerpt is taken from the November 19, 1960 "Memorandum of conversation between Mao Zedong and Ernesto 'Che' Guevara" hosted at the Wilson Center's digital archive:

Chairman Mao: I have another question. It took more than two years for you from initially landing on Cuba to the moment of ultimate victory. You united peasants and won a victory. Is there any possibility that other Latin American countries could follow this model?

Guevara: This question cannot be answered in one way [yigaierlun]. Indeed, you have more experience and more insightful analysis [than us]. In my opinion, Cuba faced a more difficult setting for revolution than other Latin American countries. There was, however, only one favorable factor: we gained victory by exploiting the negligence of the imperialists. The imperialists did not concentrate their forces on dealing with us. They thought Fidel would ask for loans after victory and cooperate with them. [By contrast,] initiating revolution in other Latin American countries would face the same danger as Guatemala—the US interfering by dispatching marines.

Chairman Mao: Are there any differences [among these Latin American countries] in terms of the domestic situation?

Guevara: Politically, there are [differences]. But socially speaking, [all these countries] fall into only two or three categories. Three countries have [an ongoing] military struggle. They are Paraguay, Nicaragua, and Guatemala.

Chairman Mao: The US now has turned its spear [duifu] on Guatemala and Nicaragua.

Guevara: In Columbia and Peru, the possibility for a great people’s revolution movement emerges.

Chairman Mao: In Peru, as I said, the majority of the people need land. Also in Columbia.

The visit by the Cuban delegation at the time did not go unnoticed in Mainland China. Dimon Liu was born in China and immigrated to the United States in 1965. She wrote about her early experiences growing up in the midst of the Great Leap Forward in 2017 and her first encounter with Cuba while still in China.


It was 1960, the height of famine during the years of Great Leap Forward. I was a child living in the southern city of Guangzhou in China. Meal time meant a little rice, and whatever we could scrape together. For nearly two years, we had no meat, fish or even cooking oil. We were starving.

All of a sudden, there was cane sugar from Cuba, and we school kids had to learn Cuban songs. We had been on rations even before the Great Leap Forward which began in 1958. Thirty jin (one jin is about 1.1 pound) of grains per month for an adult, and fifteen jin for a child above the age of seven. Two jin of meat and two ounces of cooking oil, also for a month.  [...]  People on our streets were dying of many infectious diseases, though no one dared to say anyone died of hunger.[...]

Frank Dikotter, the historian at the University of Hong Kong who wrote "Mao's Great Famine", a book about this period, said in a social media post that "the first thing the regime did in September 1960 was to procure an extra 100,000 tons of grain and ship it to Cuba," in order to help break the economic blockade imposed by Washington on the island. Dikotter added that "you can feed about 2000 people for a day with a ton of rice... Or over half a million people for a year."

Properly fed people rarely existed in China at that time, unless you belonged in the very small and exclusive club of Chinese Communist elite. For a child like me who received coupons for under 8 pounds of rice a month, you could have fed more than 2 million of us for a year; or about half a million Chinese adults for a year on a standard ration of 30 jin, or 33 pounds of rice per month for the amount of grain sent to Cuba.

Cuba was not the only place that China exported food to during those harrowing years.

Mao Zedong criticized Khrushchev for backing down in the 1962 Cuban Missile Crisis, and this was the last straw in a series of slights between the two communist powers that set the stage for the Sino-Soviet split. This also led to a split in Cuba's communist revolutionary leadership. Fidel and Raul Castro sided with the Soviet Union and Ernesto 'Che' Guevara sided with the Peoples Republic of China.


In 1965, Guevara returned to China and met with Zhou Enlai, also known as the mid-wife of the Great Leap Forward, to obtain assistance in his guerrilla activities in Africa. David Seddon, author and writer for the left-wing publication Jacobin, wrote about the visit and early Chinese interests in Africa in 2017:


In February 1965, Guevara flew to Beijing to see what help the Peoples’ Republic of China might provide to the rebellions in the Congo. There he met, among others, Chou en Lai (who between December 1963 and February 1964 had himself visited some ten African countries with a view to assessing how best China might intervene). Soon after his meeting with Che in Beijing, Chou was to make a second visit to Algiers and Cairo, in March 1965, possibly to meet the Congolese rebel leaders about whom Che had informed him, and then in June, he flew to Tanzania where he certainly met both Kabila and Soumaliot.

Relations between China and the Castro regime cooled, and completely deteriorated following a February 6, 1966 speech by Fidel Castro that was heavily critical of the Peoples Republic of China. Guevara would end up captured and executed in Bolivia in October of 1967.

There is a false perception that Communist China did not seek to spread revolution in Latin America and Africa in the 1960s. French investigative journalist Roger Faligot in his book Chinese Spies: From Chairman Mao to Xi Jinping dispels this notion and reveals that "in the 1950s and '60s, a series of Xinhua correspondents were identified as working as liason officers with Third World guerrilla movements, in Africa, Asia and Latin America."

The nexus between Che Guevara and the Chinese communists can also be seen in the United States with the rise of the Black Panther Party.  The Black Panther Party was founded in 1966 and was heavily influenced by Robert F. Williams, a black militant nationalist living in Cuba from 1961 until 1966 who then moved to Maoist China in the midst of the Cultural Revolution and stayed there until 1969.  Mao Zedong's regime had been engaging in this outreach to African Americans in the United States decades prior to the 1960s.


Members of the Black Panther Party were reading Che Guevara's books on Guerrilla Warfare and applying it on the streets of America to deadly effect and they were also visiting Mainland China and meeting with high ranking regime officials. Their violence continued into the 1970s.

While the Soviet Union was subsidizing the Castro regime Fidel Castro had nothing good to say about Communist China and its founding leader. In a May 1977 interview with Barbara Walters, the old dictator said that he believed "that Mao (Zedong) destroyed with his feet what he did with his head for many years. I'm convinced of that. And some day the Chinese people, the Communist party of China will have to recognize that."

In the 1980s when relations between China and the Soviet Union improved they also got better between China and Cuba. In 1989 the Cuban regime was one of the few governments that expressed support for Beijing's massacre of protesters in Tiananmen Square when the Cuban foreign minister commended Chinese authorities for "defeating the counterrevolutionary acts."

Reviewing this abbreviated history between key figures in Communist China and Communist Cuba, and the role they played in spreading revolutionary violence in Africa, Latin America and the United States should be a source of concern for democrats around the world.
Posted by John Suarez at 9:09 PM