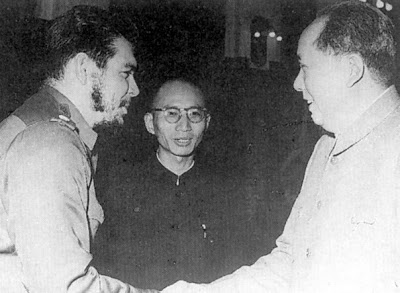 “We must say here what is a known truth, which we have always expressed before the world: firing squad executions, yes, we have executed; we are executing and we will continue to execute as long as is necessary. Our struggle is a struggle to the death."
Ernesto "Che" Guevara
UN General Assembly, 1964

"Hatred as an element of the struggle; a relentless hatred of the enemy, impelling us over and beyond the natural limitations that man is heir to and transforming him into an effective, violent, selective and cold killing machine. Our soldiers must be thus; a people without hatred cannot vanquish a brutal enemy."
Ernesto "Che" GuevaraHavana, April 16, 1967.

Film makers have been erecting a romantic image of Che Guevara from the days of his youth, as in Walter Salles's film ''The Motorcycle Diaries,"or his final days in Bolivia in Steven Soderbergh's " Che Guevara." It is important to highlight Guevara's actual message, actions, and legacy. Both films are a revisionist white wash that ignore both the atrocities committed, his hate filled writings, and their aftermath not only in Cuba but in the Americas.

The image of Che Guevara hanging in the College dorms of student radicals in 2009 may be cliché, but his message is not. In his Message to the Tricontinental Guevara argued that hatred was something to be harnessed and used: "Not only as an element to struggle against injustice,” but to be used to perpetrate new injustices. Guevara describes the utilization of hatred or as he put it “relentless hatred” to “impel us over and beyond the natural limitations of man.” This use of hatred to encourage the dehumanization of an adversary is but another manifestation of the doctrine found throughout the centuries to justify mass murder and torture.

If hate was the solution to all problems then the heroes of the 20th century would have been: Lenin, Hitler, Mussolini, Stalin, Pol Pot, and Guevara. Instead they are viewed in most quarters as mass murderers and criminals except for those who are blinded by their "relentless hatred" of their fellow human and/or their political ideology. History has demonstrated two fundamental approaches to change the face of the world. One way views hatred of the other as an element of the struggle in which the ends justify whatever means and has been the way for the individuals listed above.

Che Guevara was an admirer of Mao Zedong and his formulation of guerilla warfare is adapted from the Chinese leader. Che published influential manuals Guerrilla Warfare (1961) and Guerrilla Warfare: A Method (1963), which were based on his own experiences and partly chairman Mao Zedong's writings. Guevara stated that revolution in Latin America must come through insurgent forces developed in rural areas with peasant support. His international legacy of glorifying violence through an erroneous analysis of guerilla warfare, based on his experiences with the Batista army, which was too incompetent and corrupt to fight, and applying Zedong’s writings on the subject led to bloodbaths in Argentina, Chile, El Salvador, Nicaragua, Chiapas, Congo, Angola and decades of military dictatorship and political violence. Nevertheless it could have been worse. Che was killed in 1967 in the jungles of Bolivia. Another disciple of Mao Zedong who adapted his theories was Pol Pot, who unlike Che achieved power in 1975 after a guerilla struggle in Cambodia. He carried out a radical revolution modeled after Mao and ended by killing 25% of the entire population of his country: Cambodia.

Children in Cuba beginning at age 5 are taught to chant " We will be like Che!" every Friday at school. They are taught to be like the man who saw people as material to be molded and shaped in his Guevara’s own words: " To build communism, you must build new men as well as the new economic base. Hence it is very important to choose correctly the instrument for mobilizing the masses. Basically, this instrument must be moral in character, without neglecting, however, a correct utilization of the material stimulus-especially of a social character." One method of material stimulus was the firing squad. Che Guevara personally carried out hundreds of executions and issued even more death warrants. According to journalist Luis Ortega, who knew him, Che sent 1,897 men to the firing squad.

The consequences of building violent, selective, and cold killing machines is that these means lead to tragic ends that continue the cycle of violence and bloodshed. One example took place in the early morning hours of July 13, 1994 just six miles from Havana’s sea wall, the Malecón, out in the ocean a tug-boat with more than 71 Cubans trying to head for sanctuary were attacked. These victims were met by other tugboats captained by Che's "new men" who used high pressure hoses to knock these refugees overboard into the sea, and later rammed and sank the boat drowning 41 passengers. 21 of the dead were women and children. Ten years after the massacre acts of remembrance were carried out around the world. Jorge García, who lost 14 family members on the tugboat, poke out rejecting Che Guevara’s approach while embracing another: "There are those who think that we should be full of rancor and a thirst for vengeance, but I don't want revenge. I feel sorry for the people who assassinated my family but I do want a trial so that this situation can serve as a lesson and that these people or others like them in other parts of the world, don't do this kind of thing again. Not in Cuba. Not anywhere.” Seek justice but not revenge. Address an injustice with justice not new injustices.

This is a radical alternative to Che Guevara and Mao Ze Dong, tragically an alternative that would have saved tens of millions of more lives in the past century. Its philosophical underpinning is found in the statement: " Love your enemies, do good to those who hate you, bless those who curse you, pray for those who mistreat you.” This path has and continues to be followed by persons of such diverse backgrounds as Mahatma Gandhi, Martin Luther King Jr., Lech Walesa, Vaclav Havel, Corazon Aquino, Desmond Tutu, Aung San Suu Kyi, and Dr. Oscar Elias Biscet. These men and women have demonstrated that hatred is something to be overcome, not an "element of struggle," but rather a stumbling block to freedom. Martin Luther King Jr. spoke of the challenge in November of 1960 in reference to sit-ins organized to protest segregation:

The sit-in demonstrations seek to secure moral ends through moral means. And ever so often in history when men seek to achieve the splendid goals of freedom, human dignity, and justice they resort to methods of violence, such as guerrilla warfare, such as assassination, and other methods of bloody revolution. […] We see here a crusade without violence, and there is no attempt on the part of those who engaged in sit-ins to annihilate the opponent but to convert him. […] I submit that this method […] is justifiable because it uses moral, humanitarian, and constructive means in order to achieve the constructive end.

Guevara had been executed on October 9, 1967 and just months before his own assassination Martin Luther King Jr. called on his staff to combat the “romantic illusion” of guerilla warfare in the style of Che Guevara among young radicals concluding: “We must not be intimidated by those who are laughing at nonviolence now.”

Che Guevara argued in his writings and speeches that hatred is good because it, "transforms us into effective, violent, selective, and cold killing machines" Yet Mahatma Gandhi directly challenged this kind of thinking when decades before Che arrived on the political scene others advocated the same methods as Guevara in India arguing with great prescience: It is a cowardly thought, that of killing others. Whom do you suppose to free by assassination? The millions of India do not desire it. Those who are intoxicated by the wretched modern civilization think these things. Those who will rise to power by murder will certainly not make the nation happy.

Forty years after the assassination of Martin Luther King Jr. an African American took the oath of office and became President of the United States in a country that has profoundly changed. What of the rest of Latin America? Guevara’s call to action in a hemisphere with too many military juntas led to new military juntas in countries that had not known them before in their history: Brazil, Ecuador, Panama, and Uruguay all had their longest military juntas following the Castro regime exporting guerillas to violently overthrow governments in 1959 along with promoting Guevarist ideology. On January 3-15, 1966 the Tricontinental Conference hosted by the Cuban government and the explicit announcement of their goals in Guevara’s Message to the Tricontinental. Other countries such as Chile, who had last known a military junta between 1924 and 1931, in reaction to communist threats in 1973 embraced Augusto Pinochet who remained in power for seventeen years.

With the exception of Nicaragua Che Guevara’s prescription for revolution in Latin America led to a generation of right wing military dictatorships and harsh repression. In Nicaragua it led to a Marxist left wing military dictatorship and civil war. Ironically, Pinochet was brought down by followers of Gandhi and King who through non-violent action pressured Pinochet into a plebiscite which he lost and through persistence and patience sought and continue to seek justice for his victims. If Fidel Castro and Che Guevara had not created the Tricontinental in 1966 and explicitly called for the use of terrorism and armed guerrillas then there might not have been an Operation Condor, in which the military establishments responded to Che Guevara's call to create "cold killing machines" by creating their own and setting them loose on left wing partisans. A month before Pinochet's September 11, 1973 coup against the democratically elected Salvador Allende four radical left wing organizations from Argentina, Bolivia, Chile, and Uruguay met and established the Revolutionary Coordinating Junta.

This struggle for real freedom is both spiritual and material. The spiritual enemies are hatred, distrust, fear and despair. For example in the case of Cuba there are abundant reasons to hate the evils and injustices committed by Guevara and his co-conspirators. They have imprisoned tens of thousands of prisoners of conscience, attempted to indoctrinate an entire generation, made Cubans second class citizens in their own country, they have divided families, made political ideology a litmus test for patriotism, and executed thousands. Cuban dissident leaders inspired by Gandhi and King have rejected this culture of violence and hatred despite great suffering on their own part. Dr. Oscar Elias Biscet, an opposition leader currently serving a 25-year prison sentence for his human rights activism believes that: "To love one's neighbor is also to love one's enemy. Although in reality that qualifier-'enemy' does not exist in my vocabulary. I recognize that I only have adversaries and I have acquired the capacity to love them because in this way we do away with violence, wrath, vengeance, hatred and substitute them with justice and forgiveness."

Oswaldo Paya Sardiñas addressing the European Parliament upon being awarded the Sakharov Prize for Freedom of Thought in Strasbourg, France on the 17 of December 2002 declared: “ The first victory we can claim is that our hearts are free of hatred. Hence we say to those who persecute us and who try to dominate us: ‘You are my brother. I do not hate you, but you are not going to dominate me by fear. I do not wish to impose my truth, nor do I wish you to impose yours on me. We are going to seek the truth together’.” With this victory courageous Cuban democrats are in the process of bringing this lamentable legacy to an end with a rebirth of freedom and national reconciliation.
Posted by John Suarez at 9:54 AM