Their apologists then and now 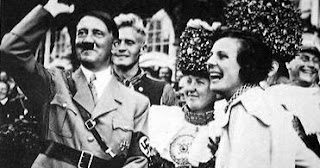 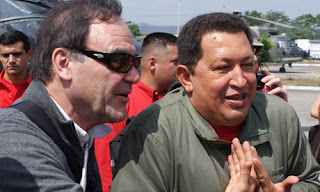 When I saw the image of Oliver Stone and Hugo Chavez walking down the red carpet together at the Venice Film Festival for the world premiere of South of the Border a "documentary" i.e. propaganda puff piece on Mr. Chavez a week after the observance of the start of WWII it seemed in poor taste. It also reminded me of the origins of the film festival they were attending, and more importantly the role that cinema and modern communications have played in bolstering totalitarianism then and now.

At the top of the page we see two photographs of documentary filmmakers and democratically elected enemies of democracy at their side. Back in the 1930s it was Helene Bertha Amalie "Leni" Riefenstahl with Adolf Hitler whose political party had participated in four elections and began "reforming" the German Constitution transforming it into a totalitarian state. During this process Leni filmed Triumph of the Will at the 6th National Socialist German Worker's (NAZI) Party Conference along with their the annual rally following Hitler around and documenting his entrance at the rally and speeches.

There would be ten party conferences with an eleventh planned for 1939 cancelled due to the outbreak of WWII. It has been described as one of the greatest films in history, and has continued to influence movies, documentaries, and commercials to this day. Riefenstahl won the German Film Prize (Deutscher Filmpreis), a gold medal at the 1935 Venice Biennale, and the Grand Prix at the 1937 World Exhibition in Paris. When Oliver Stone ascribes Mr. Chavez's democratic credentials to winning elections while at the same time ignoring the undermining human rights standards in Venezuela and filming a propaganda film South of the Border without taking into account the opposition to Chavez he is following a path Leni Riefenstahl blazed in the 1930s.

The Venice Film Festival founded in 1932 by Count Giuseppe Volpi di Misurata as the "Esposizione Internazionale d'Arte Cinematografica" is the world's oldest film festival. The festival has taken place every year in late August or early September. There was no competition at the 1932 festival that would begin at the second festival in August 1934 in which nineteen countries took part with over 300 accredited journalists and the "Coppa Mussolini" was introduced for best foreign film and best Italian film and would continue to be awarded through 1942. The Venice film festival was founded in and flourished in Benito Mussolini's fascist dictatorship.

In 1936 Nazi Germany hosted the Olympics and emerged victorious from the XIth Olympiad and Goebbel's attempt to give the regime a more human face:"Think of the press as a great keyboard on which the government can play.' Overt Jew-baiting was toned down for the duration, visitors were treated well, and at Goebbels’s insistence the German news media covered the Games in a sporting spirit." Frederick Birchall's report in The New York Times that the Games put Germans “back in the fold of nations,” and even made them “more human again.” Some even found reason to hope that this peaceable interlude would endure.

Hitler's Minister of Propaganda, Joseph Goebbels, was invited to and attended the 1938 edition of the Venice Film Festival where Leni Riefenstahl's Olympia, a documentary of the 1936 Nazi olympics was the winner. One years later the world would be plunged into World War II and in short order the Holocaust would claim 6 million Jewish lives.

Like Leni Riefenstahl, Oliver Stone won at the 1994 edition of the Venice Film Festival with his fictional work Natural Born Killers. Let us hope that his propaganda documentaries do not fare as well as Ms. Riefenstahl's.
Posted by John Suarez at 7:34 AM