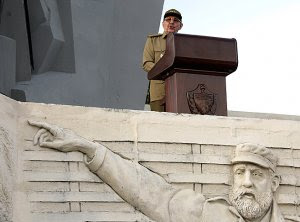 "Despite significant obstacles to research, Human Rights Watch documented more than 40 cases in which Cuba has imprisoned individuals for “dangerousness” under Raúl Castro because they tried to exercise their fundamental rights. We believe there are many more. The “dangerous” activities in these cases have included handing out copies of the Universal Declaration of Human Rights, staging peaceful marches, writing news articles critical of the government, and attempting to organize independent unions." - Human Rights Watch (2009)

A decade after Human Rights Watch released their CUBA'S REPRESSIVE MACHINERY: Human Rights Forty Years After the Revolution which offered a well documented overview of how Cuba's legal system serves as part of the apparatus of repression and how it operated and operates today in Cuba the human rights organization released a report documenting Raul Castro's tenure as "President" titled New Castro, Same Cuba: Political Prisoners in the Post-Fidel Era and the complete report is available in pdf format online. The report offers a breakdown of repression against dissidents, but also offers insights into the regime's totalitarian nature :

The Raúl Castro government has applied the “dangerousness” law not only to dissenters and critics of the government, but to a broad range of people who choose not to cooperate with the state. We found that failing to attend pro-government rallies, not belonging to official party organizations, and being unemployed are all considered signs of “antisocial” behavior, and may lead to “official warnings” and even incarceration in Raúl Castro’s Cuba. In a January 2009 campaign called “Operation Victory,” dozens of individuals in eastern Cuba—most of them youth—were charged with “dangerousness” for being unemployed. So was a man from Sancti Spíritus who could not work because of health problems, and was sentenced to two years’ imprisonment in August 2008 for being unemployed.

One must participate in the propaganda exercise and in some cases carry out acts of repression against fellow citizens in the Cuban dictatorship's version of Orwell's 2 minutes hate which is the act of repudiation that in Cuba can go on a lot longer than two minutes or risk being on the receiving end. You can see and hear a sampling of how they operate in the video below beginning at 00:50:

A word about Human Rights Watch
When a totalitarian regime is criticized it must attack the critic and question their motives. It is standard operating procedure. It has been repeatedly used against Amnesty International, UN Human Rights experts such as Christine Chanet, and against Human Rights Watch. Following the release of the report the Cuban diplomatic mission in Washington released a statement in which it described Human Rights Watch's "evaluation of human rights in Cuba is illegitimate and illegal." First who and what is Human Rights Watch? There vision and mission statement is clear as is the fact that they have a track record of being verbally attacked by numerous governments across the ideological divide. First Human Rights Watch does not recieve directly or indirectly any government funding and rely on private donations. Secondly, the organization arose out of Helsinki Watch which monitored Soviet and Eastern European compliance with the 1975 Helsinki Accords after their founding in 1978 and Americas Watch founded in 1981 which monitored authoritarian and military dictatorships in the Hemisphere and was criticized at the time for bias against El Salvador, Guatemala, by the Reagan Administration and was accused by The Wall Street Journal of "a gentler standard to U.S. adversaries in Central America than to U.S. friends." Now this version of events is provided by the self described"progressives" at Fairness and Accuracy in Reporting. The organization Human Rights Watch was to formally come into existence in 1998 as a fusion of these two organizations and similar counterparts in Asia, Africa, and the Middle East. Now that we have a better perspective on Human Rights Watch and in the spirit of the phrase a picture is worth a thousand words. Around the same time that Helsinki Watch and Americas Watch were doing their job on behalf of human rights Fidel Castro was hosting leaders of the Argentine military junta in Havana.

Fidel Castro, the Argentine Military Junta and the Dirty War 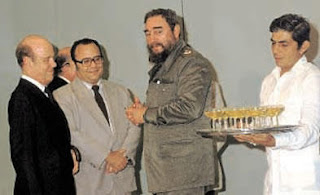 On the picture on the right is Fidel Castro with Argentine foreign minister Nicanor Costa Mendez of the Argentine military junta that according to a number of sources extrajudicially executed and disappeared as many as 30,000 Argentines between 1976 and 1983 in the Dirty War meeting in Havana at the Non-Aligned Movement gathering. 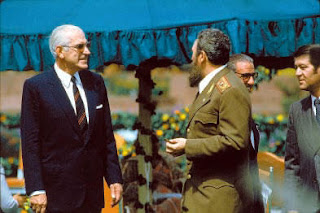 That is not the only member of the junta that he commiserated because he was also photographed here on the left with "President" Reynaldo Benito Antonio Bignone Ramayón who, like Fidel Castro then and Raul Castro today , was"President" in name only, but in reality a brutal military dictator. In 2009, he is on trial for the kidnapping, torture, and murder of 56 people in a concentration camp. Sadly, whereas groups like Human Rights Watch and Amnesty International sought to expose the Dirty War and stop it and to later document the crimes committed and along with the victims demand justice the Cuban government did everything at the time to block efforts to investigate the disappearances from their perch at the United Nations Human Rights Commission.

The Castro Brothers Crimes in Ethiopia 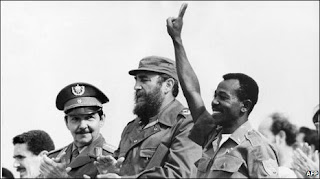 In the case of Marxist ruler Mengistu Haile Mariam or as Fidel Castro referred to him "Comrade Mengistu" there is a lot of information demonstrating the close working relationship between Mengistu and both Castro brothers. Cuba sent the first wave of what would become 5,000 Cuban troops to fight government rebels in December 1977-January 1978. In September of 1978 Fidel Castro arrived in Ethiopia to address both Ethiopian and Cuban troops and claim both victory and the Ethiopian revolution's popular support:

"Comrade Cubans, I can recall those days of December 1977 and January 1978 when we said farewell to the first Cuban internationalist combatants who were leaving for Ethiopia. [...]Eighteen months later we have returned to a Ethiopia which is victorious be cause of its combative sons' heroism and the support of international solidarity, as Comrade Mengistu stated 2 days ago. Moreover, it is also an already powerful Ethiopia. Tuesday's popular parade confirmed the enormous popular support for this revolutionary change. Yesterday's military parade tells us of the degree of organization and discipline achieved by the combative and courageous fraternal Ethiopian people. The rapid revolutionary offensive of the Ethiopian and Cuban troops practically annihilated the enemy. [...]Ethiopian brothers, together with you we have fought and we have won. Together with you we are ready to fight again and to win again. Together with you we pledge: Fatherland or death, we shall win!
Fidel Castro addressing Cuban and Ethiopian troops in Ethiopia September 1978

Castro's September 1978 speech places Cuban combatants on the ground in December of 1977. The importance of these dates will become evident later on. The next excerpt is from a conversation with the then East German dictator Erik Honecker discussing the situation in Ethiopia and Fidel Castro's assesment of Mengistu in February of 1977 following a visit and meeting with him:

Mengistu strikes me as a quiet, serious, and sincere leader who is aware of the power of the masses. He is an intellectual personality who showed his wisdom on 3 February. The rightists wanted to do away with the leftists on 3 February. The prelude to this was an exuberant speech by the Ethiopian president in favor of nationalism. Mengistu preempted this coup. He called the meeting of the Revolutionary Council one hour early and had the rightist leaders arrested and shot. A very consequential decision was taken on 3 February in Ethiopia. The political landscape of the country changed, which has enabled them to take steps that were impossible before then. Before it was only possible to support the leftist forces indirectly, now we can do so without any constraints. 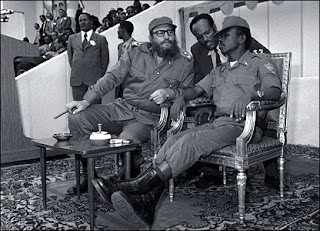 Fidel Castro with close ally Mengistu Haile Mariam
The dates are important because it coincides with the beginning of the "Red Terror" in which 2,000 Africans were slaughtered. This was a purge of political opponents. According to press accounts: "Suspects were rounded up, some shot, others garrotted. The bodies were thrown on the streets." There would be a Cuban military presence on the ground until 1988. In December 2006 Ethiopia's former dictator was found guilty of the extrajudicial killing of thousands of political opponents and his involvement in a famine which killed one million people and found guilty of genocide in absentia. A Reuters video report on the 2006 trial is available below:

Naturally the Cuban government would not have been pleased with Reed Brody Human Rights Watch's legal counsel's reaction to the trial and verdict at the time: "This is a man whose regime was marked by some of the worst atrocities of our time. Thousands of political killings [were carried out and] over 100,000 people died as a result of forced relocations."

No doubt the Castro brothers and all those officials in the dictatorship who have committed gross human rights violations feel a little uncomfortable when they see their close allies being tried and condemned for crimes against humanity and genocide as the ultimate condemnation by history. Not to mention that groups like Human Rights Watch and Amnesty International "would very much like to see [Mengistu] physically brought to justice--not justice in absentia." Has anyone given any thought to what responsibility Cuban leadership shares with the events in Ethiopia? Difficult questions that the dictatorship in Cuba would rather not answer truthfully or be held accountable.
Posted by John Suarez at 1:07 AM