Heroes and Exemplars of 1989: Vaclav Havel and the Power of the Powerless

Hero:
1. a person of distinguished courage or ability, admired for his brave deeds and noble qualities.
2. a person who, in the opinion of others, has heroic qualities or has performed a heroic act and is regarded as a model or ideal: He was a local hero when he saved the drowning child. 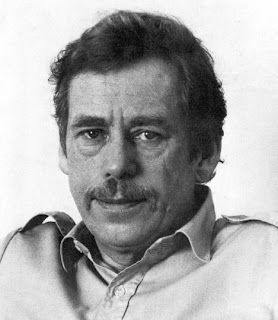 Vaclav Havel, Czech Republic
A brief biography of Mr. Havel would be summed up as playwrite, essayist, former dissident, and politician, but there is much more to this individual that bears a closer look. His essays on The Power of the Powerless and Politics and Conscience should be required reading in any civics course and should be read and reread by politicians who aspire to become statesmen. Visit his official website where some of his essays from both his time as a dissident and later as president are available online.

The purpose of this brief profile is to encourage the reader to search further and read Havel's collection of essays and watch the documentaries on the struggle of the Czech people to obtain and maintain their freedom, and in the process learn how to make the world a better place.

Vaclav Havel is hosting a concert "It is coming" on Saturday, November 14, 2009 at the Prague Crossroads to celebrate the nonviolent end of communism in Czechoslovakia on November 17, 1989 that became known as the Velvet Revolution.

Below a selection of images, quotes, phrases, and trailers of documentaries with the aim of better capturing this great person: 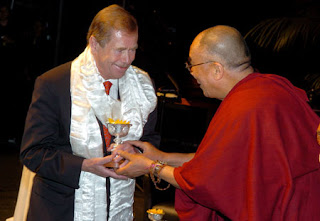 The only lost cause

The only lost cause is one we give up on before we enter the struggle. Quoted in Amnesty International's essay "From Prisoner to President – A Tribute"

The significance of a purely moral act

Even a purely moral act that has no hope of any immediate and visible political effect can gradually and indirectly, over time, gain in political significance -Letter to the overthrown Czechoslovak Communist Party chairman Alexander Dubček (August 1969)

How you become a dissident

You do not become a "dissident" just because you decide one day to take up this most unusual career. You are thrown into it by your personal sense of responsibility, combined with a complex set of external circumstances. The Power of the Powerless (1978)

The Pen and the Sword

I really do inhabit a system in which words are capable of shaking the entire structure of government, where words can prove mightier than ten military divisions. Speech of October 1989, accepting a peace prize

On Truth and Love

“The truth and love will always beat the lie and hatred.” 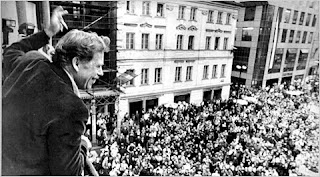 I have noticed that a politician – and this is a general phenomenon – always has a special halo around him, due to the simple fact that he holds a particular office. It has nothing to do with whether he is a good politician or a complete fool: the position itself lends that person a special aura. Interview, Monthly November 11, 2009

"Citizen Vaclav Havel Goes on Vacation" recreates a trip around Czechsolovakia that its future president Vaclav Havel took in 1985 when he was still the country's most prominent dissident. In the course of one week, he was twice thrown into jail for 48 hours of preventive detention and followed by over 300 plainclothed policemen, who would helpfully point out the right way whenever he got lost.

Two positive aspects of being a Dissident

..When someone makes the effort to become a dissident and joins the opposition and runs the risk of being persecuted, that fateful step has two positive aspects to it. The first is that they feel good about being in harmony with their conscience and their beliefs. When you lie a little, or make compromises you shouldn’t, you can have the ugly feeling of being soiled. If you decide to do something good, regardless of whether that advances your cause or not, you at least have the positive feeling of being on the side of truth. And the second aspect – and the experience of my country and of the other post-communist countries bears this out—is that these seemingly pointless, quixotic efforts may rather quickly turn into something important, and may eventually bear fruit. The just may be successful. Interview, Monthly November 11, 2009

The Power of the Powerless Documentary (2009)