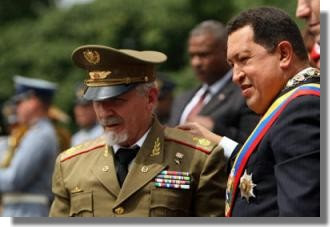 Ramiro Valdez & Hugo Chavez en Venezuela Enero 2009
Today the Inter-American Commission on Human Rights called for calm in Venezuela in the midst of demonstrations protesting the shutdown of independent media by the Chavez and government violence against non-violent demonstrators that have claimed lives and wounded many more. Canada has weighed in expressing its concern over free speech rights in light of the shutting down of six television stations. Meanwhile according to the Jamaica observer former Chavez loyalists have called on him to resign among them the former foreign minister Luis Alfonso Davila; former defense minister Raul Isaias Baduel; one of the main drafters of the new Chavez-era constitution, Hermann Escarra; and two men who were at Chavez's side in a failed 1992 military coup bid, Yoel Acosta and Jesus Urdaneta.

The government response in addition to denouncing those using twitter and text message as terrorists; police firing tear gas at students and a call for government supporters to prepare for battle as Hugo Chavez demonizes the opposition is to welcome into their ranks a high ranking Cuban official: Commander Ramiro Valdez, "a historic leader of the revolution" to address the electricity crisis. Valdez is the Vice President of the Council of State and Minister of Communications in the Cuban government. Gramscian Marxist and Afro-Cuban scholar Carlos Moore offers the following observation on Commander Valdez back in 1961 and today:

Ramiro Valdez was an inflexible, totalitarian and brutal person. He was the most feared man in . The repressive policies of the regime were crafted by him. struck fear into the hearts of Cubans (even revolutionary ones). Today, he apparently continues to be the same dogmatic, sectarian and brutal person he was at the height of his power, but he is no longer the powerful figure that he used to be.

When well meaning individuals claim that the Cuba of 1959 is no longer relevant because generations have passed and new people are on the scene they need to look at the facts. The "new people" are periodically purged to make way for the next "new people" but the one's who run the show are the "old guard" like Fidel Castro (age 82), Raul Castro (age 77), Ramiro Valdez (age 77) and José Ramón Machado Ventura (age 78). Andy Gomez, senior fellow at UM's Institute for Cuban and Cuban-American Studies offers a different analysis of Valdez than Moore's:

Ramiro Valdés, who served for many years as the heavy-handed Minister of the Interior, in charge of domestic security. Valdés is known to have had several run-ins with Castro, is viewed as very ambitious and at age 77 is in far better physical shape than most other top government officials. But senior officers in the Armed Forces Ministry, which Castro led for nearly 50 years, do not trust Valdés, Gomez said.

Either way the Venezuelan democrats should be extremely wary of the arrival of Ramiro Valdez in the midst of the ongoing turmoil. His track record is that of one who is brutal, heavy handed, and extremely ambitious. A dangerous combination for democrats who stand in his way.

The reality of Cubazuela is confirmed by his presence on the ground in the midst of the Venezuelan regime's crisis, and rather then solve the electricity crisis, it is more likely that he is there to assist in crushing the democratic opposition. Venezuela's democrats are in my prayers.