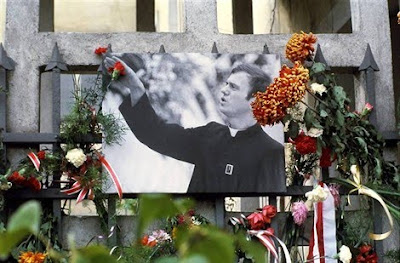 Jerzy Popiełuszko was born on September 14, 1947 and he was murdered by agents of the Polish internal intelligence agency, (Security Service of the Ministry of Internal Affairs)on October 19, 1984. He was a Roman Catholic priest from Poland, associated with the Solidarity union. He has been recognized as a martyr by the Catholic Church, and was beatified on Sunday, June 6, 2010 in Warsaw with more than 150,000 in attendance.

Beatification is an act of the Pope who declares that a deceased person lived a holy life and is worthy of public veneration. It is a first step toward canonization. The video above shows Poles marching with relics of the now beatified priest on their way to the main ceremony.

In a message to the beatification Mass from Nicosia, Cyprus, Pope Benedict said the priest's "sacrificial service and martyrdom" was a "special mark of the victory of good over evil" and offered an example to Catholic clergy and laity everywhere. The video below is of the main service. Popieluszko's mother, Marianna Popieluszko, who recently turned 100 attended the ceremonies and spoke to reporters beforehand: "I cried when my son left this earth, and now it is with joy that I greet his beatification." When asked what the secret is to raising a son like Father Popieluszko, she replied: "Love people, Love God, with all your heart."

Two movies have been made about the life and death of Father Jerzy Popiełuszko, one a Hollywood production in 1988 starring Ed Harris and a Polish Production in 2009 that although taking some dramatic license outline the courageous life he led.

This blog entry focusing on some of his core ideas may provide a better insight into the thinking of this moral exemplar. The following fragments are taken from a page dedicated to him by two Polish organizations - The Institute of National Remembrance and The National Centre for Culture. 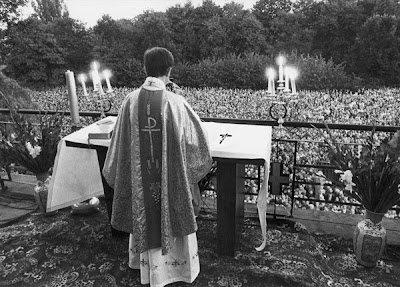 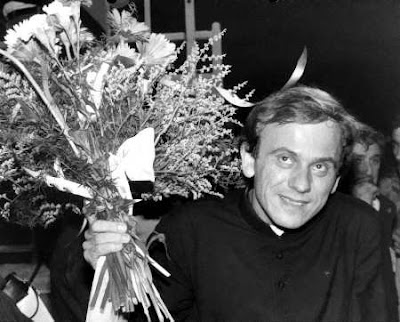 A fragment from the Sermon of 27 March 1983
Our Fatherland and respect of human dignity must be the common objective for reconciliation. You must unite in reconciliation in the spirit of love, but also in the spirit of justice. As the Holy Father said five years ago, no love exists without justice. Love is greater than justice and at the same time finds reassurance in justice.

And for you, brothers, who carry in your hearts paid-for hatred, let it be a time of reflection that violence is not victorious, though it may triumph for a while. We have a proof of that standing underneath the Cross. There too was violence and hatred for truth. But the violence and hatred were defeated by the active love of Christ. 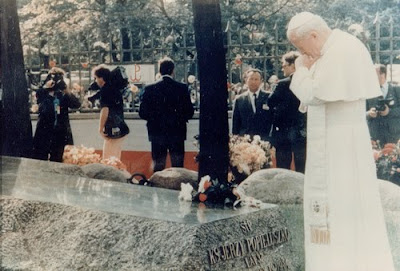 A fragment from the Sermon of 4 December 1983
Work, especially hard work, shapes love and social justice. It happens only when work is ruled by the proper moral order. If there is no moral order at work, in place of justice creeps hurt, and in place of love - hate. That is why those who in recent decades have destroyed and are still destroying the moral order do such harm to the working people and the whole society. When they want to replace Christian morality, rooted in a thousand years of tradition, against the will of all with so-called secular morality, in a Christian country there will always be a purulent wound. They do harm when they exclude God from the workplace, and believers are discriminated and usually can not occupy high positions. The workers of August 1980 called more for moral order than for higher wages. The world opinion was struck by the fact that the events of August were free of aggression, violence, that nobody was injured or died, that they bore the clear stamp of religion. The Holy Father, John Paul II, spoke of this in Katowice. 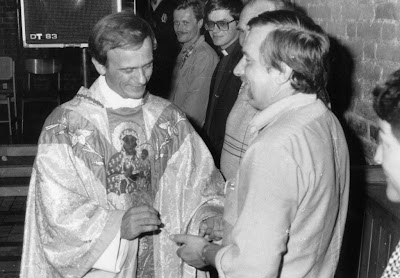 A fragment from the Sermon of 24 June 1984
A condition for peace of conscience, peace in the family, peace in the Homeland and the world is justice based on love.(…)

(…) Justice dictates each to be granted the rights they are due. And so the right to work in accordance with your profession and not be thrown out of work for your beliefs. The Primate of Poland spoke of this on 2 January 1982 in the following words: “There is one matter which lies heavy on the heart of the Church. It is the matter of the dismissals of those who do not want to resign from the “Solidarity” trade union. And we stand against this injustice which is an abuse of human rights...”.
Posted by John Suarez at 8:28 PM