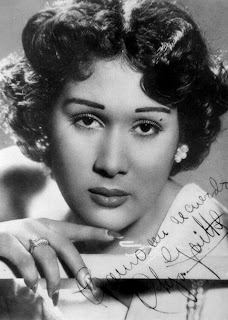 “We are united in a cause that is really important. We are united with women who are heroes and who are the only ones who have done for Cuba’s political prisoners, for the exile community, for the dissidents, for the opponents of the government and for us who have been 50 years in exile without a country these women have made news around the world so that the world know the pain of our Cuba. Thank you for giving us our heroes. Thank you. We will continue our fight. And while they march with bouquets of flowers in their hands--the only weapons they have. We, too, will continue to march in support of them. Thank you, Long Live a Free Cuba!


International media are reporting on the passing of Olga, artists are recalling their friendships with her and Olga's impact in music and culture around the world but not in her homeland Cuba. The Miami Herald reported how fans and friends stretched out over 8 city blocs to pay tribute to La Reina del Bolero -- The Queen of Bolero.

Olga Guillot (born October 9, 1922 in Santiago de Cuba - died July 12, 2010 in exile in Miami, Fl) is a famous Cuban singer who was known to be the queen of bolero. She is a native of the Cuban city of Santiago. In 1954, she recorded her song "Mienteme" ("Lie to Me"), which became a hit across Latin America, and earned her three consecutive awards back home in Cuba as Cuba's best female singer. 1958 proved to be an important year for Guillot, as she toured Europe for the first time, including stops in Italy, France, Spain and Germany.

She sang alongside the equally legendary Édith Piaf during a concert held in Cannes. Olga Guillot kept a house in Cuba as she traveled around the world with her music, apart from her house in Mexico. But Guillot opposed Fidel Castro's Government, and, in 1961, she decided to leave Cuba for good and establish herself in Venezuela. Not long after that, she left Venezuela, making Mexico her only permanent residence country.

First, jukeboxes were confiscated from corner bars and nightclubs (there were as many as 20,000 jukeboxes in Havana in the 1950s). Then, in 1961, at the First Congress of Writers and Artists, music was defined as an organ of integration into the new Revolutionary society. The bolero came to be seen as a reactionary genre, in bad taste, and ultimately, banned. Cuba's world-class composers and performers, many of whom had brought the genre to its golden age, were abruptly silenced. Finally, in 1968, in the Ofensiva Revolucionaria -- the Cuban equivalent of China's Cultural Revolution -- most of the 1,200 cabarets and dance halls for which Havana was known were shut down (with only a couple of exceptions, including the notable Tropicana). Bolero lovers and performers were left with no viable venues. An entire generation was traumatized by loss of the very words and music that had defined the key moments of their lives -- coming of age, first loves, stolen kisses, secret romances.

Olga Guillot is one of many Cuban artists disappeared by the Cuban regime from Cuba's cultural life in what music censorship experts have described as a cultural genocide. She like Celia Cruz would be erased from Cuban culture under the communist dictatorship in Cuba. Both would never be able to physically return to Cuba because of the communist dictatorship there in power that banned their music and made the nonpersons. Please engage in an act of cultural resistance and rescue help spread their music and that of other censored artists into Cuba by any means at your disposal. Olga and Celia may not be able to return to Cuba physically, but there music and their place in Cuban culture can be restored.

Her long and talented life ended on July 12, 2010 but she will always be remembered for her music and as a Cuban who suffered a long exile from her homeland thanks to a brutal dictatorship that banned her music. Requiescat in pace Olga Guillot, Queen of the Bolero and Cuban patriot. We, free Cubans and children of Cubans, will make sure that your music and your cultural legacy are restored in Cuba.