Martin Luther King, Jr. on the importance of having an aggressive attitude

Combined with understanding, good will and a sense of discipline 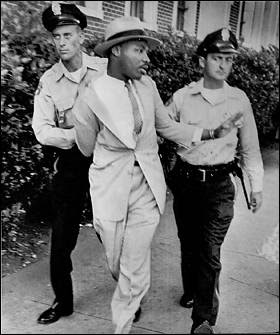 It is interesting to note the similarity with the debate taking place today in the Cuban opposition between those that prefer a slower incremental approach and those who prefer a more aggressive approach.


“I think it’s better to be aggressive at this point. It seems to me that it is both historically and sociologically true that privileged classes do not give up their privileges voluntarily and they do not give them up without strong resistance. - Martin Luther King, Jr. (1957)

"All of the gains made that we received in the area of civil rights have come about because the Negro stood up courageously for these rights and he was willing to aggressively press on. So I would think that it would be much better in the long run to stand up and be aggressive with understanding, good will and with a sense of discipline. Yet these things should not be substitutes for pressing on and with this aggressive attitude. I believe we will bring the gains or other civil rights into being much sooner than just standing idly by waiting for these things to be given voluntarily.” - Martin Luther King, Jr. (1957)

SIX PRINCIPLES OF NONVIOLENCE
Fundamental tenets of Dr. King’s philosophy of nonviolence described in his first book, Stride Toward Freedom. The six principles include:

SIX STEPS OF NONVIOLENT SOCIAL CHANGE
A sequential process of nonviolent conflict-resolution and social change based on Dr. King’s teachings. The Six Steps of Nonviolence developed by The King Center include:

(1.) Information gathering and research to get the facts straight;

(2.) Education of adversaries and the public about the facts of the dispute;

(4.) Negotiation with adversary in a spirit of goodwill to correct injustice;

(6.) Reconciliation of adversaries in a win-win outcome in establishing a sense of community.

Text taken from The King Center
Posted by John Suarez at 1:48 AM