The power of nonviolence & international solidarity in Burma 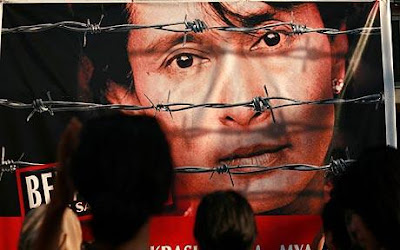 Burma’s detained opposition leader Aung San Suu Kyi was officially barred from voting in the upcoming "general election", the first one since 1990 that she and her party won but that the military-run junta refused to recognize. A junta that has engaged in brutal and repugnant repression over its entire time in power with a particular brutality seen around the world as recently as the 2007 during the Buddhist Monk led Saffron Revolution.

Now after much negative press that not only would she not be allowed to run in the upcoming elections because she is currently an Amnesty International prisoner of conscience and has been for 14 of the past 20 years the junta has backtracked and now has placed her on the voting roles.

It doesn't mean much because the "election" or should one say "the vote" or the "Junta's selection" has blocked full multiparty participation in the elections forcing the National League for Democracy to disband and the leader that won the last elections, Aung San Suu Kyi, is still under arrest because of her popularity and nonviolent defense of democracy.

Nevertheless this is small victory for international solidarity and scrutiny that produced this small concession means that we must maintain our vigilance with what is happening in Burma and speak out.

Aung San Suu Kyi is a non-violent disciple of Mohandas Gandhi and has observed that this type of struggle takes a long time but its worth it in the long run. Otherwise we risk remaining silent as crimes against humanity are being committed and with our silence be complicit. The video play list below is a tribute to her and all the apostles of nonviolence around the world.