G.K. Chesterton & Mohandas Gandhi: The Rejection of the Modern

Did a Catholic reactionary influence Gandhi's approach towards Indian independence? 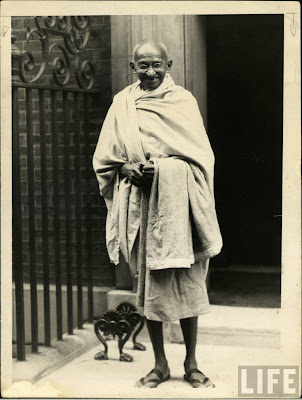 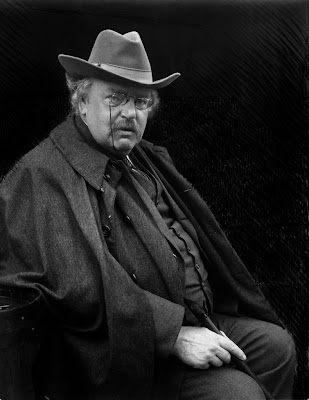 "No people have risen who thought only of rights. Only those did so who thought of duties."-Mohandas Gandhi Collected Works

Gandhi had already practiced civil disobedience and developed the concept of Satyagraha in his civil rights campaigns in South Africa, but had a number of his ideas reinforced and backed up during a visit to Britain and reading three different texts: Letter to a Hindoo by Leo Tolstoy; Comment in the Illustrated London News of September 1909 by G K Chesterton and the socialist activist and poet Edward Carpenter’s Civilization: Its Cause and Cure. Gandhi's conclusion was that modern civilization was sick and that India's ancient civilization although with its own defects could be reformed and that its core values were sound. G.K. Chesterton did have a substantial impact on Gandhi.

When I am confronted with the actual papers and statements of the Indian Nationalists I feel much more dubious, and, to tell the truth, a little bored. The principal weakness of Indian Nationalism seems to be that it is not very Indian and not very national.
[…]
When all is said, there is a national distinction between a people asking for its own ancient life and a people asking for things that have been wholly invented by somebody else. There is a difference between a conquered people demanding its own institutions and the same people demanding the institutions of the conqueror. Suppose an Indian said: "I heartily wish India had always been free from white men and all their works. Every system has its sins: and we prefer our own.
[…]
Perhaps you think I am opposing Indian Nationalism. That is just where you make a mistake; I am letting my mind play round the subject. This is especially desirable when we are dealing with the deep conflict between two complete civilisations. Nor do I deny the existence of natural rights. The right of a people to express itself, to be itself in arts and action, seems to me a genuine right. If there is such a thing as India, it has a right to be Indian. But Herbert Spencer is not Indian; "Sociology" is not Indian; all this pedantic clatter about culture and science is not Indian. I often wish it were not English either. But this is our first abstract difficulty, that we cannot feel certain that the Indian Nationalist is national.

He immediately translated it into Gujarati, and this was one of three texts that influenced his book Hind Swaraj, his own first formulation of a specifically “Indian “ solution to his country’s problems.

The Soviet press published an article written by S.M. Vakar in 1948 following Gandhi's assassination titled "The Class Nature of the Gandhi Doctrine" subtitled "Gandhi as a Reactionary Utopian" in the Soviet philosophy journal Voprosy filosofii (Questions of Philosophy). The Marxist Leninist argument was outlined as follows:

Soviet writers would later rewrite this critical description, when the fact that Gandhi had indeed succeeded in obtaining national independence despite rejecting their methods of struggle, declaring that "the ideas and the guidance of the outstanding leader of the Indian national movement, Mahatma Gandhi, were of great significance in this struggle." Gandhi's explicit rejection of Marxist class struggle as hateful and his critique that they did nothing to solve problems are powerful:

The socialists and communists say, they can do nothing to bring about economic equality today. They will just carry on propaganda in its favor and to that end they believe in generating and accentuating hatred. They say, when they get control over the State, they will enforce equality. Under my plan the State will be there to carry out the will of the people, not to dictate to them or force them to do its will. I shall bring about economic equality through non-violence, by converting people to my point of view by harnessing the forces of love as against hatred. I will not wait till I have converted the whole society to my view but will straight away make a beginning with myself. It goes without saying that I cannot hope to bring about economic equality of my conception, if I am the owner of fifty motor-cars or even of ten bighas of land. For that I have to reduce myself to the level of the poorest of the poor.

Gandhi's description of the nature of a regime that sought to use violence to crush capitalism offers an excellent description of what has taken place in Marxist Leninist states that promised a workers paradise:

It is my firm conviction that if the State suppressed capitalism by violence, it will be caught in the coils of violence itself, and will fail to develop non-violence at any time. The State represents violence in a concentrated and organized form. The individual has a soul, but as the State is a soulless machine, it can never be weaned from violence to which it owes its very existence. [...] It can be easily demonstrated that destruction of the capitalist must mean destruction in the end of the worker and as no human being is so bad as to be beyond redemption, no human being is so perfect as to warrant his destroying him whom he wrongly considers to be wholly evil.

This explains in large part the hostility from the communists to Mohandas Gandhi's social political agenda. Nevertheless, the term "reactionary Utopian" a term hurled as an insult against the Indian independence leader in 1948 was embraced by Joe Sobran, a catholic anti-war conservative turned anarchist who passed away on September 30, 2010. In a March 27, 2001 column titled "Confessions of a Reactionary Utopian" Sobran outlined:

“The task of a reactionary utopian is simply to pull his head out of his immediate environment and look to religion, philosophy, history, and art for intimations of how social life ought to be.” [...] But at least you should keep a free mind, a mental and spiritual space that is all your own, unpenetrated by official lies and propaganda.” [...]“The tyrant really wants your soul — he speaks solicitously of “raising your consciousness” — but you don’t have to yield it to him. That’s the one private property he can’t take away from you.”

This is a manifesto describing the defense of truth within a totalitarian framework. According to Gandhi the root meaning of Satyagraha is "holding on to truth" which is what is described in the excerpt above.

veritas vos liberabit
Posted by John Suarez at 12:58 AM