"Everybody loves you when you're six foot in the ground."
John Lennon, from Nobody Loves You 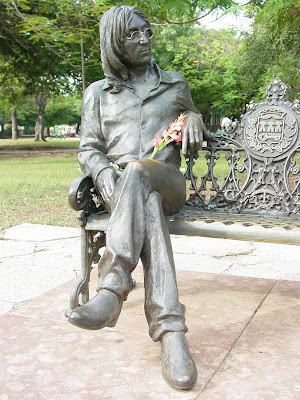 John Lennon would've most likely turned 70 today if not for an assassin's bullet 30 years ago on December 8, 1980 and thats a tragic loss both for the world and his family. Listening to some of his music today and seeing a photo of the statue of him in Cuba led to the following train of thought.

In the 1960s and 1970s the Cuban dictatorship engaged in what amounted to cultural genocide banning musicians, musical groups and genres that were viewed as decadent or counter-revolutionary. Many great Cuban musicians were marginalized and their music censored, but it was not limited to Cubans. The Beatles and later on John Lennon's solo music were also officially banned for years.

In 2000 John Lennon was "politically rehabilitated" on the 20th anniversary of his death by no less than Fidel Castro who unveiled a statue (pictured above) and by regime spokesmen who would try to claim him as an ideological fellow traveler.

Although things are not as extreme as in the early years of the dictatorship even today songs and musicians that are critical of the regime are subject to censorship, banned from the airwaves and occasionally arrested.

In addition to his music John Lennon is remembered for his controversies on religion , disdain for Richard Nixon, and anti-war stand but his disdain for "violent revolution" has been downplayed.

John Lennon rejected the ideological basis of Castroism: a small band of armed guerrillas smashing everything down so that they can take over and hang on to power. Wonder what Lennon would say about old men hanging on to power and making life intolerable for rising generations? The answer is found in this excerpt from the 1969 interview where Lennon lays it all out:


"The militant revolutionaries, ask them to show you one revolution that turned out to be what it promised militantly. Lets take Russia, France anywhere that had it. What they do is smash the place down and they build it up again. The people who build it up hang on to it then they become the establishment. Now you guys are going to be the establishment in a few years. Its not worth knocking it down cause its convenient to have the rooms and the machinery." [...]

"The thing is to protest but protest non-violently because violence begets violence. You know if you run around wild you get smacked that's it. Its the law of the universe. they've got all the weapons and got all the money and they know how to fight violence because they've been doing it for thousands of years suppressing us. The only thing they don't know about is nonviolence and humor."

They'll love when your six feet in the ground and can no longer speak up for yourself, but at least with recorded interviews and his music John Lennon's message carries on along with his message of peace.

John Lennon's rock n roll descendants rock on in Cuba today subject to censorship and repression that they rebel against in a manner that would have give him at a minimum a good laugh as would have the Cuban regime's efforts to exploit him:

The fact of the matter is that John Lennon had always been critical of class warfare and towards the end of his life became even more prudent about even radical non-violent action observing: "There’s nothing new under the sun. All the roads lead to Rome. And people cannot provide it for you. I can’t wake you up. You can wake you up. I can’t cure you. You can cure you."