11 months after the death of Orlando Zapata

Repression continues and a call to action 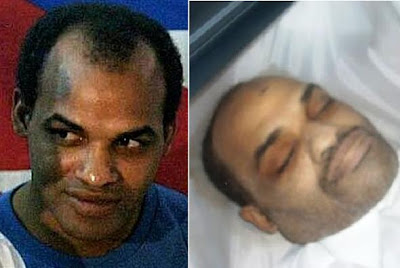 Orlando Zapata Tamayo, before and after the Cuban regime's prison industrial complex.

The news from Cuba is predictable, the repression continues against the family of Orlando Zapata Tamayo and those who want to demonstrate their solidarity. Twitter confirmed early today with tweets from Yoani Sanchez:

TR @yoanisanchez #Cuba #GY Police and security block entrance to Embarcadero, Banes to impede solidarity with family of #OZT 11 months after his death.

At the same the Free Cuba Foundation issued a worldwide call to action today for the one year anniversay of the death of Orlando Zapata Tamayo and the 15th anniversary of the extrajudicial executions of Carlos Costa, Pablo Morales, Mario De La Peña and Armando Alejandre Jr. on February 24, 1996 in the Brothers to the Rescue shoot down.

11 months following his extrajudicial death it is important to remember who is Orlando Zapata Tamayo because as long as we remember him and his sacrifice he will live on. Zapata Vive!