The hope of impunity is the greatest inducement to do wrong. - Marcus Tullius Cicero 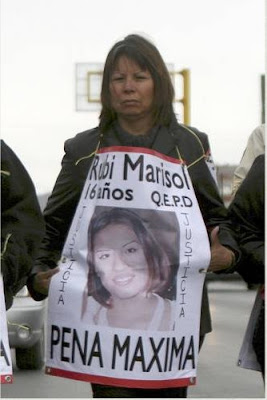 Marisela Escobedo Ortiz
Hundreds of women have been brutally raped, tortured and murdered in Juárez, Mexico since 1993 without their murderers being brought to justice. Most of the victims have been young women between ages 17 and 22. The murder of women is defined in the dictionary as femicide and that is what has been going on in Juarez over the past 18 years.

On May 28, 2008 Amnesty International released a document titled: Further Information on Fear for Safety/Death threats that stated:

Members of an organization set up to fight for justice for women abducted and murdered in Ciudad Juárez, Chihuahua state, have received threats apparently linked to the opening of the film “Bordertown”, which is loosely based on the stories of the murdered women. Members of Nuestras Hijas de Regreso a Casa (Our Daughters Return Home) have supported the film’s release as a way of raising awareness of the killings of women in Ciudad Juárez.

Over the past two years a half dozen activists have been added to the body count. The latest two victims: Marisela Escobedo Ortiz, the mother of 16-year-old murder victim Rubi Marisol, and the poet Susana Chavez, a fierce critic of the authorities' failure to halt the killings, whose remains were identified on January 11, 2011. The latest victims were both members of Our Daughters Return Home.


Marisela Escobedo Ortiz was shot in the head on December 16, 2010 following the release from prison of Sergio Rafael Barraza Bocanegra, who allegedly killed her 16-year-old daughter Rubi, leaving her burned and dismembered in a rubbish bin, in June 2009. Marisela was gunned down outside the governor's office in the northern city of Chihuahua while holding a vigil for her murdered daughter. Security footage shows masked men pulling up in a car exchanging words with Marisela Escobedo, chasing her into traffic shooting her in the head as she tried to flee, and the killers jumping into a waiting car that sped off.


Footage of the assassination of Marisela Escobedo Ortiz and her background as an activist.

Less than a month later, Susana Chavez, a poet, who coined the phrase “Ni una más,’’ (Not one more) back in the 1990s and wrote the book Song to a City in the Desert with the poem "Sangre" Blood included written from the perspective of one of the victims was found strangled and mutilated. The official narrative from the authorities seem to be an attempt to blame the victim nor has their been time for a thorough investigation. 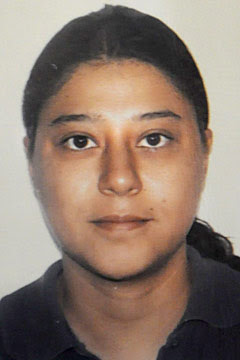 Susana Chavez
The individuals responsible for these horrendous crimes must be brought to justice and the officials who for too long have looked the other way or have been complicit in these crimes need to be held accountable. Radio program below brings up her background as an activist.