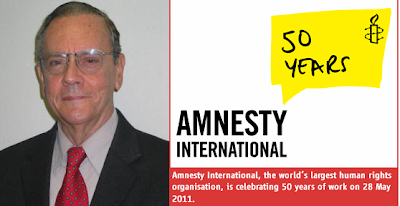 I am saddened to announce that Adolfo Rivero Caro has passed away. He was one of the founders of the Cuban Committee for Human Rights, a former prisoner of conscience, a newspaper columnist, author and a friend I'd known since the early 1990s. He was a man of firm convictions and the courage to both debate them and live them out in the public arena. He was an intellectual.

Adolfo Rivero Caro born into a life of privilege, son of a journalist, sent to the best schools absorbed and analyzed the information about him and despite the personal consequences embraced Marxist-Leninist ideas in his youth and joined the revolutionary underground against the then Cuban dictator Fulgencio Batista in the 1950s.

When the Communist revolution achieved power in Cuba and displayed its arbitrary and dictatorial characteristics, despite a comfortable post as a professor of Marxist philosophy at the University of Havana in 1968 he was one of the authors of a profound left wing critique of the Cuban revolution. It was the first substantial break with the communist party from its own ranks. Once again Adolfo Rivero's conscience demanded that he denounce injustices and challenge them.

Others that joined him in this endeavor such as Modesto Arocha and Ricardo Bofill would face detentions and prison but would also become lifelong friends and found a human rights movement. Later he would write about the forgotten right: the right to property.

Over the 75 years of his life he evolved politically from a Marxist-Leninist in his youth to a founder of the Cuban human rights movement in his middle age and into a Cuban neoconservative and public intellectual in his later years. Towards the end of his life he began to focus on the Gramscian cultural war in the United States and went beyond neoconservatism. However, he always remained a vigilant defender and activist for Cuba's freedom movement. In an essay titled "Cuba: The Unnecessary Revolution" he offered the following analysis:

It is very difficult to overthrow a totalitarian dictatorship. Nobody has ever done it. Cubans have fought. Thousands have died in front of the firing squads and hundreds of thousands have languished in the Cuban gulag for resisting Castro's regime. Mario Chanes de Armas, Fidel Castro's companion in the assault on the Moncada Barracks, became the longest-standing political prisoner in the world, at thirty years in jail, for opposing Castro's dictatorship.

Despite the above pessimism, Adolfo Rivero Caro stood up and defied the totalitarian system in 1968 when that meant losing your job, imprisonment, your family destroyed and the possibility of an extrajudicial death. Within Cuba's prisons Adolfo founded along with Ricardo Bofill and others in 1976 the Cuban Committee for Human Rights. In 2006 on the thirtieth anniversary of its founding in the essay Anniversary he described the precarious beginnings of the movement:

Our human rights movement emerged as a strictly Cuban initiative that for a long time lacked almost all sympathy or solidarity abroad. Everyone had a hard time believing that open defiance of the regime itself could only be a clever provocation. Gradually, however, Ricardo Bofill's suicidal stubbornness convinced a few supporters of the importance of the utility of the human rights issue as a weapon in the struggle against the totalitarian dictatorship of Fidel Castro.

Adolfo beginning in 1968 would struggle on for 20 years departing Cuba in 1988 for exile in France arriving in Miami in 1989 but he never forgot those who stayed behind to carry on the struggle:

Today there are hundreds of dissidents who struggle within the country despite being fired from work, jailed, beaten and constantly harassed. There are independent journalists, teachers, doctors, lawyers, architects, librarians, and even political parties. You can ask for their names, their addresses. [...] Dissidents in Cuba show the way of the future. All of them should be released immediately and unconditionally. While Castro and its communist dictatorship remains in power, there is no hope for real change.

Adolfo recognized that the struggle to overthrow a totalitarian dictatorship was difficult but that as long as the regime and the Castros endured there would be no change. It was the dissident movement he helped to found that challenged the dictatorship and its totalitarian nature by merely existing. He also observed the importance of the Cuban exile community stating:

Outside Cuba, the Cuban Exile Community has not forgotten its homeland and simply melted with the population of the greatest country in the world, the United States of America. Though that would be a natural option and though probably very few will ever return to Cuba, it would also mean to turn its back on their homeland and its noble people. That will never happen. They need us. One day, Cuba will be free. Communism has already lost. The future belongs to democracy.

Over the past few years we met a handful of times, often when a mutual friend David Landau was visiting him in town, and we vigorously debated US foreign policy. ( Adolfo was a supporter of President George W. Bush's policies whereas I tended more towards Ron Paul's policies prescriptions with some notable exceptions). Let me also say for the record that Adolfo reproduced a couple of my essays on his website: Abandoned Battlefield(2001) and The Final Chapter (2003). He encouraged young activists to engage in the battle of ideas giving his time and challenging underlying assumptions in debate and dialogue.

In 1996 Adolfo Rivero Caro provided a detailed lecture on the origins and development of the Cuban Communist Party to the Free Cuba Foundation, an FIU student group, and described his own role in the communist underground and participation in the early days of the Revolution. He also told us about his brother Emilio-Adolfo Rivero Caro who had also been involved in the struggle against Fulgencio Batista but was part of the anti-communist resistance to the dictatorship. Emilio-Adolfo left Cuba, returned and was captured during the Bay of Pigs in 1961.

Adolfo Rivero described how he was approached by "comrades" within the regime and asked what should be done with his captured brother Emilio-Adolfo and he told us that he had asked them to have his brother executed by firing squad believing that it was more humane then 30 years in one of the Castro regime's prisons. Courageous, truthful and disregarding the consequences of what others might say or think he provided a group of students a deep understanding of the kind of system operating in Cuba and its brutal nature.

I regret that I hadn't spoken with Adolfo in months and although I knew that he had health troubles did not appreciate the full gravity of his condition. Until very near the end he kept writing and his opinion pieces appeared in El Nuevo Herald and on his website Neoliberalismo. Adolfo's passing has taught me a vital lesson: Do not take your friends for granted nor believe that maintaining contact through cyberspace is a suitable measure of keeping up to date.

Today, there will be a wake for Adolfo Rivero Caro at 4:00pm that coincides with the 50th anniversary of the founding of Amnesty International. It was Amnesty that coined the term "prisoner of conscience" in 1961. Adolfo Rivero Caro was a prisoner of conscience in Cuba together with other members of the Cuban Committee for Human Rights among them: Ricardo Bofill, Sebastian Arcos Bergnes, and Gustavo Arcos Bergnes all imprisoned for defending human rights and dignity.

Agree or disagree with Adolfo Rivero Caro's positions over the years but never doubt that in addition to having been a prisoner of conscience under the Castro regime that he was a prisoner to his conscience throughout his life and always spoke truth to power no matter how unpopular or dangerous. He will be greatly missed. Requiescat in pace.
Posted by John Suarez at 3:02 AM