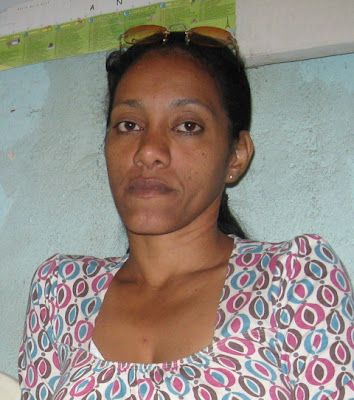 The whereabouts of Cuban human rights activist Ivonne Malleza Galano are unknown after police detained her during a peaceful demonstration on 30 November in Cuba's capital, Havana City. Her husband, Ignacio Martínez Montejo, has also been detained after participating in the same protest.
On 30 November, Ivonne Malleza Galano, a member of the Ladies in Support (Damas de Apoyo) to the Ladies in White (Damas de Blanco), and her husband Ignacio Martínez Montejo were arrested by police officers while they were staging a peaceful demonstration against hunger and poverty and holding a banner with the slogan “Stop hunger, misery and poverty in Cuba” in Fraternity Park (Parque de la Fraternidad) in Havana City. Ivonne Malleza Galano was handcuffed and pushed into a police vehicle. Two police officers arrived, tried to confiscate the banner and detained her, along with Ignacio Martínez Montejo. Video footage posted on the internet shows Ivonne Malleza Galano being arrested by the police officers at Fraternity Park while the crowd gathered round her and asked the officers to let her go.
The whereabouts of Ivonne Malleza Galano are unknown and the authorities have not told her relatives whether she is still in police custody, whether she is facing charges, and where she is held. Ignacio Martinez Montejo is still being held at the Ninth Police Station (Novena Estación de la Policía) on Acosta Avenue, Diez de Octubre Municipality, in Havana City. It is not known if he has been charged with any offence.
Since the beginning of the year, the Cuban authorities have detained hundreds of people for short periods, to
prevent them from taking part in peaceful demonstrations.
Please write immediately in Spanish or your own language:
- Calling on the authorities to immediately reveal the whereabouts of Ivonne Malleza Galano, and to ensure that she has immediate access to her family, lawyer and any medical assistance she might require;
- Asking for details of any charges they face to be made public, and calling on the authorities to ensure that any legal proceedings against them conform to international fair trial standards;
- Urging the authorities to remove unlawful restrictions on freedoms of expression, association and assembly in Cuba.
PLEASE SEND APPEALS BEFORE 20 JANUARY 2012 TO:
Head of State and Government
Raúl Castro Ruz
Presidente de la República de Cuba
La Havana, Cuba
Fax: +53 7 83 33 085 (via Foreign Ministry);
+1 212 779 1697 (via Cuban Mission to UN)
Email: cuba@un.int (c/o Cuban Mission to
UN)
Salutation: Su Excelencia / Your
Excellency
Interior Minister
General Abelardo Coloma Ibarra
Ministro del Interior y Prisiones
Ministerio del Interior, Plaza de la Revolución,
La Habana, Cuba
Fax: +537 85 56 621, +1 212 779 1697 (via
Cuban Mission to UN)
Email: correominint@mn.mn.co.cu
Salutation: Su Excelencia / Your
Excellency
And copies to:
Attorney General
Dr Juan Escalona Reguer
Fiscalía General de la República, San Rafael
3, La Habana, Cuba
Salutation: Señor Fiscal General / Dear
Attorney General
Also send copies to diplomatic representatives accredited to your country. Please insert local diplomatic addresses below:
Name Address 1 Address 2 Address 3 Fax Fax number Email Email address Salutation Salutation
Please check with your section office if sending appeals after the above date.