"Wilmar has died because he was born in a country without legal, electoral or civic paths to express his nonconformity." - Yoani Sanchez 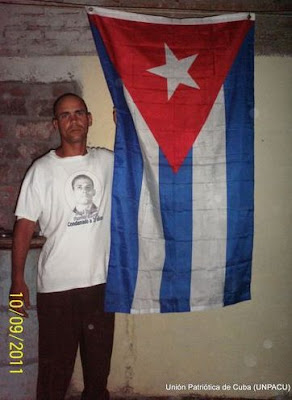 Tonight two little girls lost their father; a young wife her husband; and a mother her son. Wilman Villar Mendoza died tonight after his kidneys and other organs failed. He died the result of a prolonged hunger strike provoked by outrage over a profound injustice committed against him by the Castro regime.

Wilman Villar Mendoza was arrested on November14, 2011 during a violent crackdown by the political police on nonviolent Cuban democrats. Wilman and the others had engaged in a public protest in the town of Contramaestre in Santiago, Cuba on November 2, 2011. Ten days later in a closed-door, one day sham trial on November 24 Wilman was sentenced to four years in prison for disobedience, resisting arrest and contempt and was sent to Aguadores prison.

Outraged at the injustice committed against him Wilman launched a hunger strike on November 25, 2011 and refused to wear the uniform of a common prisoner. There was little press coverage or official protests regarding his plight until his death appeared imminent.

Ladies in White and other opposition activists marched and demonstrated on his behalf suffering brutal beatings and detentions but the international press remained silent. Now that he has died, as was done in the case of Orlando Zapata Tamayo in 2010, the international media is reporting it. Too little and too late for Wilman Villar Mendoza. Bloggers and activists on twitter had alerted the world early on about his plight. Pedazos de la Isla, Uncommon Sense, Babalu, and Capitol Hill Cubans deserve special mention for getting the word out on their respective blogs.

When confronting a brutal totalitarian dictatorship there is a very simple equation:

International official protests and heightened press scrutiny on behalf of brutalized dissidents means less bloodshed. Silence means that Maritza Pelegrino Cabrera, Wilman's wife, is now a widow and his two young daughters ages 5 and 6 will not get to grow up having a father.
Posted by John Suarez at 11:46 PM