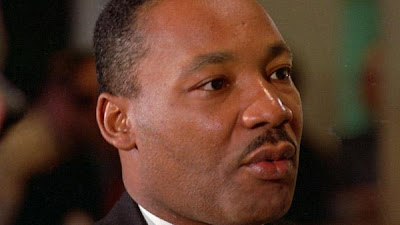 Martin Luther King Jr. in 1966
Martin Luther King Jr. was born in Atlanta, Georgia 83 years ago today on January 15, 1929. He would grow up to be a Baptist minister and civil rights leader and die by an assassins bullet at the age of 39 on April 4, 1968. Both the FBI and KGB carried out active measures against this man in an effort to destroy him and his reputation.


Martin Luther King Jr. on the Mike Douglas show in 1967

Martin Luther King Jr. was brought into the civil rights struggle by the bus boycott that arose out of an act of nonviolent resistance by Rosa Parks on a segregated bus on December 1, 1955. His ability to organize a national social movement begins with the initial steps to organize the Montgomery bus boycott.

He was criticized by Malcolm X and Stokely Carmichael for his nonviolent stand and accused Martin Luther King Jr. of being passive but in fact believed in the importance of having an aggressive attitude.

At the same time critical voices have arisen that advocate violence. The historical record surrounding Martin Luther King Jr. and the black power movement demonstrates the success of nonviolent resistance and the failure of violent resistance in achieving the goals of black empowerment.

Diane Nash, a great pioneer of nonviolence from the sit-ins to the Selma march, rejected nonviolence and took up with the siren call of Black Power. Nash described her reasoning:

"If we've done all this through nonviolence, think what we could do if we were just willing to be urban guerrillas and knock over a few banks. [...] "Of course, ten years later I looked up and I hadn't knocked over any banks and I hadn't been a guerilla. I hadn't even been to the rifle range. But I had withdrawn from this painful, creative engagement with nonviolence and democracy behind a big smokescreen of noise."

In addition to deactivating serious activists the lure of violence and urban guerrilla warfare would exact a terrible cost. According to Virginia Postrel, from 1964 to 1971, there were more than 750 riots, killing 228 people and injuring 12,741 others. After more than 15,000 separate incidents of arson, many black urban neighborhoods were in ruins. The end results were ruined neighborhoods; an explosion in crime; and increased poverty.
Posted by John Suarez at 11:18 AM