A look back over a shameful and overlooked history

Over the past few months there has been a vigorous debate around continuing economic sanctions on the dictatorship in Cuba and a series of manufactured controversies surrounding democracy promotion programs directed at the island. However, a couple that have gone  unaddressed are the conceits that American tourists, business, and high technology would somehow be game changers in Cuba and that "evolutionary change" would take place within Cuba.

Solidarity with dissidents in Eastern Europe from the West and a policy that took human rights into consideration did achieve great things there 25 years ago: the tearing down of the Berlin Wall in 1989 and the end of the Soviet Union two years later in 1991 with predominantly nonviolent movements.

The end result of ignoring the crimes of totalitarianism and engaging these regimes was one world war, and at least four genocides. Winston Churchill called the Second World War the "Unnecessary War" explaining in the preface to his book, The Gathering Storm:  "How the English-speaking peoples through their unwisdom, carelessness, and good nature allowed the wicked to rearm." Would sanctions have prevented the death of over 60 million people between 1939 and 1945? When one does not support the nonviolent option for real and profound change that challenges the fundamental injustices of a dictatorship only two options remain: war or collaboration with tyrants. Both are unacceptable.

What did engagement through tourism, business and the exchange of high technology achieve in the early twentieth century? This first entry will focus on the role of engaging totalitarians with business and high technology. In the Cuba debate there is a lot of talk about computers and the internet as the magic bullets that will end the Castro dictatorship but often times attention is not paid to who is empowered in the transfer of technology. History demonstrates that this can be a disaster.

Armand Hammer, and Henry Ford, both sold tractors to the Soviet Union. Such endeavors facilitated commercial ties between the Soviet Union and the United States, establishing the basis for further cooperation, dialogue, and diplomatic relations between the two countries. Pravda described Armand Hammer as a confidant of Vladimir Lenin and a "red millionaire" in the article titled "The Soviet Union that Hammer Built." Hammer was a key player in Lenin's New Economic Policy that consolidated Soviet rule in the 1920s. The Black Book of Communism estimates that 20 million were killed by the communists in the Soviet Union. The United States established the Export-Import Bank to encourage more trade with the USSR and having US taxpayers assume the risk during the Roosevelt Administration.

In addition to investments in the Soviet Union, Henry Ford had extensive relations and investments in Nazi Germany. This included factories assisting the Nazi war effort that continued through World War 2.

Beginning with the National Socialists arrival in power the International Business Machines Corporation (IBM) provided the equipment with ground breaking technologies, precursors to computers, to identify and categorize holocaust victims. According to a October 8, 2002 article in The Village Voice "the infamous Auschwitz tattoo began as an IBM number. IBM engineered a strategic business alliance with Nazi Germany and provided the punch card technology that would be used in managing the vast apparatus of the Nazi death camps. More troubling is that the NAZIS were able to arrive in a town with lists of names of people identified as being Jewish. Where did they get the data? From IBM Germany's census operations and similar advanced people counting and registration technologies. IBM enabled the Holocaust.

Hunting Dissidents and Building the Great Firewall in China
The optimists would say that was 1933. It couldn't happen now. Wrong. It already has in Communist China. Western companies are assisting Communist China in spying on Chinese nationals and having dissenters rounded up. Amnesty International in 2002 reported on Chinese prisoners of conscience including some who had died and been tortured while in detention. American corporations such as Cisco assisted the Chinese totalitarians in building an internet that serves the interests of the dictatorship and spies on the people of China. American companies have also assisted in targeting independent journalists and activists trafficking in information censored by the dictatorship and providing their location to the Chinese communist regime. Shi Tao, an independent journalist, was imprisoned for a decade because of Yahoo but thanks to having family in the United States he was able to sue and the American technology company settled out of court. Other dissidents were not so lucky and were jailed, tortured and killed. The communist regime in China has been in power since 1949 and according to The Black Book of Communism has a tally of 65 million victims.

Principled diplomacy, international human rights standards combined with nonviolent interventions by civil society have been shown to produce positive change without wholesale bloodshed.  Democracy, or human rights, promotion using principled nonviolent means can always be improved, but should not be discarded.

Unfortunately, the history of the twentieth and twenty first centuries have shown that corporations engaging with totalitarian dictatorships be it the Nazi Third Reich under Adolph Hitler, the Soviet Union under Vladimir Lenin and Josef Stalin, the Peoples Republic of China under Mao Ze Dong and Deng Xio Peng, or Communist Cuba under the Castro brothers businessmen peddling high tech equipment have not only provided legitimacy to these dictatorships but assisted in systematizing gross human rights violations and prolonging their rule. 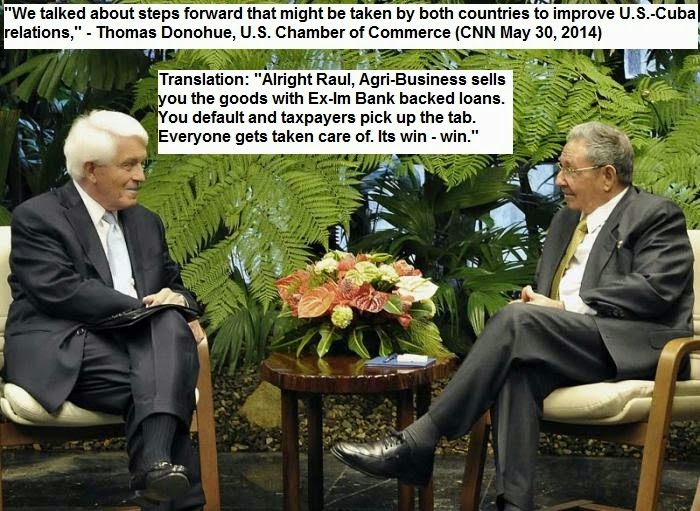