U.S. Treasury Cuba Announcement in brief: "U.S. taxpayers get ready to pick up the tab for the Castro regime."

"They’re normally like chupacabras.  The only thing they’re looking for is someone to give them money for free." - Vicente Fox, Former Mexican President, in 2015 on the Castro regime 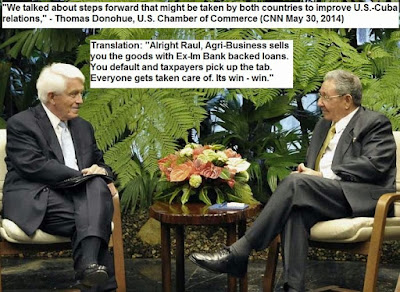 Today's press release from the Treasury Department appears innocuous titled: "Treasury and Commerce Announce Further Amendments to the Cuba Sanctions Regulations"  as does the "subheading Amendments Further Implement President Obama’s Policy Related to Easing of Sanctions on Cuba."  However the devil is in the details reproduced below from paragraph six:


Financing–
Removing financing restrictions for most types of authorized exports.
The United States is the only country in the world that since 2000 has had a cash and carry arrangement with the purchase of agricultural and pharmaceutical products.Under this arrangement American companies sold over $5.2 billion to the Castro regime. This arrangement protected U.S. taxpayers from having to subsidize the dictatorship when it defaulted on its financial obligations.

How did the Castro regime raise the money to purchase U.S. goods?

James Prevor, President and Editor in Chief of the publication Produce Business in October of 2002 in the article, Cuba Caution, reported on how Cuba "had exhausted all its credit lines and, at best, was simply rotating the accounts. When the opportunity came to buy from the United States, Cuba simply abandoned all those suppliers who supported the country for 40 years and began buying from us."  The suppliers were not the ones impacted by Cuba's failure to pay its debts, the taxpayers of the suppliers' home countries were the one's left holding the tab.

For example in December 2015 it was announced that Spain would forgive $1.88 billion that the Castro regime owes it. In December of 2013, Russia and Cuba quietly signed an agreement to write off 90 percent of Cuba's $32 billion debt to the defunct Soviet Union, a deal that ends a 20-year squabble. Canadians have had to pursue Cuban maritime debts seizing Cuban vessels and negotiating payment through Canadian courts. On November 1, 2013 the government of Mexico announced that it was ready to waive 70 percent of a debt worth nearly $500 million that Cuba owes it. The former president of Mexico Vicente Fox protested the move stating: “Let the Cubans get to work and generate their own money…They’re normally like chupacabras.  The only thing they’re looking for is someone to give them money for free.”

This will mean that the Chamber of Commerce and Agriculture lobby will sell to the Cuban dictatorship and have the taxpayers pick up the tab if anything goes wrong.  The record with other countries over the past half century indicates that the Castro regime will default on what it owes. On April 23, 2014 Moody's Investor Service downgraded Cuba's already poor credit rating to Caa2 from Caa1which Nasdaq defines as follows: "Obligations rated Caa2 are judged to be of poor standing and are subject to very high credit risk."