What Agribusiness and the Castro regime prefer you did not know: 1. How American agri-business and members of Congress signed "advocacy contracts" in exchange for the purchase of exports and became lobbyists for the dictatorship. 2. How Castro dictatorship stopped making payments to trading partners of what they owed in order to buy billions in U.S. exports during the Bush years. 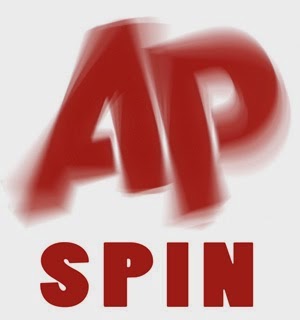 Associated Press coverage of Cuba over the past few years has been a source of controversy with well founded claims of bias. On January 5, 2014 a new episode unfolded with the article by Michael Weissenstein "Figures show US-Cuba trade hit decade low last year." The first paragraph blames "long standing barriers to trade" but the second paragraph states:


The statistics from the U.S.-Cuba Trade and Economic Council show that U.S. farmers sold slightly more than $253 million worth of food and agricultural products to Cuba in the first 10 months of 2014. If the last two months of the year reflect similar sales levels, 2014 could be the worst year for U.S. exports to Cuba since 2004.

What is not mentioned in the article is that the peak years of the Castro regime purchasing U.S. food and agricultural products was during the Bush Administration. In August of 2008 the Cuban dictatorship said that the United States was its fifth leading trade partner. With the entrance of the Obama Administration in 2009 and its policy of loosening Bush era restrictions trade between the two countries has been consistently lower. 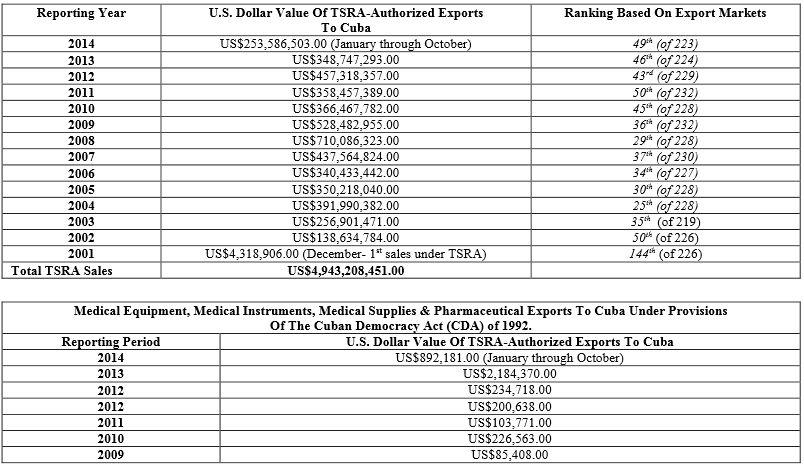 Furthermore it should come as know surprise that the collapse in trade coincided with the secret negotiations between the Obama Administration and the Castro dictatorship because it no longer needed to buy influence.  For the regime in Cuba trade is a political instrument that answers to the interests of the dictatorship and this also applies to the companies doing business with it.

The Castro regime used openings in trade from the Clinton era (medical products in 1992 and agricultural products in 2000)  to build up a pro-Castro lobby and to target congressional districts in agricultural states to advance its interests. The dictatorship accomplished this by purchasing American exports and requiring U.S. corporations and members of Congress to sign "advocacy contracts" that turned them into lobbyists for the dictatorship as a condition of the Castro regime buying their goods. News of this practice broke a decade ago in USA Today and in The Miami Herald but goes unmentioned in the Associated Press article. The Miami Herald in a October 5, 2004 editorial described this practice as "peddling influence for a communist state" and said that those engaged in the practice "should be required to register as agents of a foreign government."

John Kavulich, who was the head of the above mentioned U.S.-Cuba Trade and Economic Council until 2005 explained in 2003 the significance of these "advocacy agreements" stating: ''These agreements are a corruption of the commercial process,'' ... ``Once you include an advocacy clause, they're no longer commercial agreements; they're political documents.''

In the current Associated Press piece Paul Johnson, vice-chairman of the newly formed U.S. Agriculture Coalition for Cuba is quoted saying: "Our products can't compete with Brazil, Argentina, the EU and China because of the credit issue."

How is it that all these countries have "normal" commercial relations  with Cuba and extended the Castro regime credit are owed billions while the United States over this period has been paid in cash five billion dollars? The answer is simple and one that should caution American taxpayers: it was a political consideration by the Castro regime.

James Prevor, President and Editor in Chief of the publication Produce Business in October of 2002 in the article, Cuba Caution, reported on how Cuba "had exhausted all its credit lines and, at best, was simply rotating the accounts. When the opportunity came to buy from the United States, Cuba simply abandoned all those suppliers who supported the country for 40 years and began buying from us."  The suppliers were not the ones impacted by Cuba's failure to pay its debts, the taxpayers of the suppliers' home countries were the one's left holding the tab. The reason $5 billion dollars entered the coffers of American agribusiness while costing other countries billions is the existence of the US embargo.

Darío Fernández-Morera an associate professor at North Western University in the May 1, 2014 issue of Chronicles in the article The Cost of Normalization reports that the Small Business Exporters Association announced

Twelve years ago Prevor predicted where things have now arrived in the Cuba policy debate as far as Agro-business is concerned:

But what the really big grain traders want is to sell to Cuba on credit - and get those credits provided or guaranteed by various federal loan programs. In effect, these agribusiness behemoths want to sell to Cuba and have the U.S. tax- payer pick up the tab. And their bet is that once produce shippers have gotten a taste of the business, they will become a kind of Amen corner for the Cuban lobby, pushing Congress to approve whatever laws will be to the liking of the Cuban government. This really brings to the forefront why trade with a communist country poses unique dangers to a democratic society.

The decline in the Castro regime's purchase of American exports during the Obama Administration is a sign of what is to come if agribusiness gets its way and the US government lifts sanctions and provides credits for trading with the Castro dictatorship. The United States will be just like everyone else subsidizing the Castro regime through its export import bank and trying to figure how to recover what it is owed. It is easy to understand why so many countries are upset about the U.S. embargo on Cuba. It has protected U.S. taxpayers while leading the Castro regime to ignore its obligations with other countries while buying up US agricultural exports in an effort to influence US politics.
Posted by John Suarez at 1:52 AM